Kara and Alex make it all about them, as per usual. Alex doens't have a daughter! Is the adoption even through yet? Andrea and Lena talk. Lex's mother shows up. Kara and Alex steal and vandalise. Alex is selfish, irrational and hysterical. Kara threatens the sun. The Super Friends hurt people to help them. Lex is ditched and dismissed and his mommy is killed off. This was sappy crap.

“Nothing good as ever lasted long for me.”

“Incapable of loving anyone but himself.”

“Defined by our choices and this is the wrong one.”

~
Masters Of The Universe: Revelation Part 2

Fur underpants and technology – this is one weird planet. We get flashbacks to baby Teela. There are late life discoveries. Adam's not dead and his wound is walked off. Skeletor orates. There is dramageddon. Chris Wood is a crap voice actor. Cringer goes for Evil-Lyn. Skeleter is a god now. The Sorceress dies. Cringer speaks. This was not hearwarming. There are many matters of concern. Evil-Lyn gets a new job.

Fisto shows up. Citizens are transformed, we never see them transform back from the horrifying change. There is death and Skeletor rules the afterlife now. There is frustration and this was not heartbreaking.

There is deep concern and a reveal. There are forays into fistfights. There is a forecast of their prospects and churlish types switch sides a lot. There is some domestic violence and belated acceptance of paths and there are plights and damage done.

There is nonsensical jargon in this ill judged part 2. There is desperation in this risible follow up. The King and Queen have issues and are frequently incapable. Will people stop making moralising speeches. A suggestion is made. Greyskull has been redecorated. Liam Cunningham, Mark Hamill, Lena Headey and Kevin Michael Richardson do their actings.

There is uncertainty. Does Adora exist? There are implications and this was useless and not as good as Part 1. This was a supoptimal model. Evil-Lyn has misery and Skeletor is underappreciative. The situation is deteriorating. There is mayhem and wrecked relations and deep misgivings and traumatic change. The Queen is from Earth, how could she go back there? Skeletor is terrible. This does not resonate. There has been a profound national tragedy. A big celestial event is coming.

There is no visceral punch. Skeletor is not worthy. There are negative voices and this was not a spectackle. Evil-Lyn is not comically sour. This was muted and Skeletor is cosseted and people respond to challenges. This was irrelevant and onerous.

Evil-Lyn is aghast at Skeletor's limited ambitions. Evil-Lyn cries. This reiterates Skeletor's awfulness. There are Evil-Lyn flashbacks. Evil-Lyn lived in the sewers for 20 years? This was not substantive. Skeletor has willingness to change, briefly. Evil-Lyn makes a choice.

The planet becomes Evil-Lyn's fiefdom. This was deficient. Devastating choices are made. There is no effectiveness. Skeletor is all bones – how do he and Evil-Lyn get it on? Evil-Lyn shows off her 8 pack. Evil-Lyn destroys the afterlife. Skeletor's an ally of Adam now. There is apprehension and fear and people are astounded.

Teela's psychic now. Evil-Lyn is beyond redemption but gets one anyway. An army shows up to fight her and lets her go. Malicious shadows attack. Bee people show up. Evil-Lyn is hardline and unrepentant. There is an ideological struggle. Poor Beast-Man is ill used. Skeletor is bones, he doesn't have blood. Evil-Lyn is now Dark-Lyn. There are calculated lies and Dark-Lyn is noxious. There are cruel effects.

Orko lives and Scare-Glow shows up to get his ass kicked. There is a concerted strategy and disreputable conduct. Who was the Sorceress before Teela's mother? Dark-Lyn and Skeletor are egocentric, manipulative, violatile, vindictive people into unnecessarily destructive petty vendettas. There is social death and darker days and Greyskull's interior makes no sense. Teela shows off her new look as the latest Sorceress.

Dark-Lyn is wilful and Skeletor can't change. Ram Man shows up as Dark-Lyn shows distain. There is fear and nerves and egregious choices. Irreparable damage has been done. There is ruination and redemption. There is a limit to viewer's patience and endurance. There is dangerous impulsiveness. There is no constraints on behaviour. There are no ethical standards. There is a pattern of disregard for logic.

There is no shame or irony. Is heaven restored? There is a He-Man statue. There are emotional impacts and leavings and endings. There is emotional suffering and devastating fallout. There is a pursuit of happiness. Skeletor ends up hiding out at the technocult which leads to a big reveal and sequel hook. The motherboard the technocult worship is an avatar of the Horde!

“Surrounded by the babbonbery of obnoxious idiots.”

“Marinate in his tears.”

“The universe has no master.”

“Chaos and hurt and eath.”

“I saw eons pass in the darkening croners of space.”

“How noble and witless!”

“You forget what you truly are.”

“The part where you start cackling.”

“Bound for glory and eternal reward.”

“Bumbling idiocies of the past.”

“Her gift to bestow and withdraw at will!”

“I don't know where it's elading us.”

“The whole castle can't hear it?”

“Still think we matter to the cosmos.”

“Devoid of any hope.”

“Killed everyone in heaven.”

“Gave me a place to belong.”

“He certainty of your own importance.”

“All the power in existence.”

“He will kill you one day.”

“Attain that which was denied me.”

“End the entirety of existence.”

“Turn you into my little battle dog.”

“Born with a sacred calling.”

“Tethered to this place for all eternity.”

“My story is written.”

“Handed you a life you never would have known!”

“I gave everything of myself.”

“You can't love, you merely crave.”

“You and what army?”

“Is that PigBoy and GoatMan?”

“When it comes to henchmen, they've reached the bottom of the barrel.”

Wu's locked up in a loony bin thanks to his 'friends'. There are evil carnies and Nick's mother resurfaces. A child with destiny is wanted – it's Adalind's baby. Adalind goes to Renard. There is exposition. Is the baby actually Renard's? Nick and Renard have another standoff. What are the Royals the Royals of? People baby Adalind.

Renard is menaced by his greasy cousin. Adalind names the child Diana. Adalind has no forgiveness. Renard gives up Diana to his horrible relations. Adalind seems to forget she has powers. What sort of long con is Renard playing? The baby in some scenes is an obvious doll. No one comforts the hysterical Adalind. I'm sure that will rebound in a horrible fashion. What is Renard at? Nick's mommy makes off with Diana. This show makes no logical sense.

“Who's the idiot father?”

“They scare even us.”

“You find that attractive? Really?”

“Am I supposed to be scared?”

“She tried to kill him. Twice.”

~
Reflections In The Water

A man obsesses over a fish and Staker obsesses over a space probe. An underwater dome is found. A ginger minger is perp sweated by Paul and Straker. The aliens have made copies of SHADO staff. This was okay.

Straker gives an interview to a fake reporter. Straker shows off his sexism again. Did Straker sex up the fake reporter? SHADO bothers some Russians. People can't say hypoxia. This was bad and foul.

Pieces of the puzzle begin to fit together with devastating effects for Filip. Nobody is kind, inclusive and non-judgmental. Filip and Mia do not end up together. How dark things turned. Property theft and murder and abuse is the killer's motive. The dad is used as bait. People aren't kind or sympathetic. A woman is in a loony bin. A child is discussed. This was protracted.

There is no warm welcome. A family despise each other. Someone plans to retire. Miserable lives achieve nothing. A family was forcibly fractured. This was inadequate. The sins of the past live on. A boy was stolen and he is now a man of 35 and a mad murderer. A woman was driven crazy. Monumental blunders are made.

The obvious is overlooked no longer. Asen is the killer. A fake grave is dug up. This was all about stolen property and a stolen child namely Asen. Diana hangs out with Asen. There is a wall of crazy. Filip broods. Asen sprays sittle. Victims brought about their own murders. This was rambling and bizarre. Asen kills his real mother. Filip fires off his gun at some trees. The evil father did all this for a house with a nice view?!? Krasi is killed. Pope is sad and shouty. Donka is irrelevant. Asen confronts his adoptive parents and brother and Mia. He makes them eat soup laced with sleeping pills. The pills wear off Filip, Mia and the sobbing mother quickly. The family home was built on stolen land. Asen blows it up. Abhorrent people lack moral courage. There is death as an obvious dummy plunges down a ravine. Was Asen going to shoot Filip before Filip shot him?

“Do something brave for once.”

“For 30 years I was calling the man who killed my father dad.”

There are toxic relationships and the former FBI agent stalks. Alison thinks Taylor is alive. This is so boring.

There were no cows in North America in 10,000 BC – so why is there a cow? People are stupid and lazy. Eve has to ensure child Gavin goes through the sinkhole and fathers her children. There's a reveal about who Ella is that does not make much sense. Eve is stupid.
There's a bad child actor. Why is there a barcode on the cow? There are other sinkholes mapped out. This was okay. 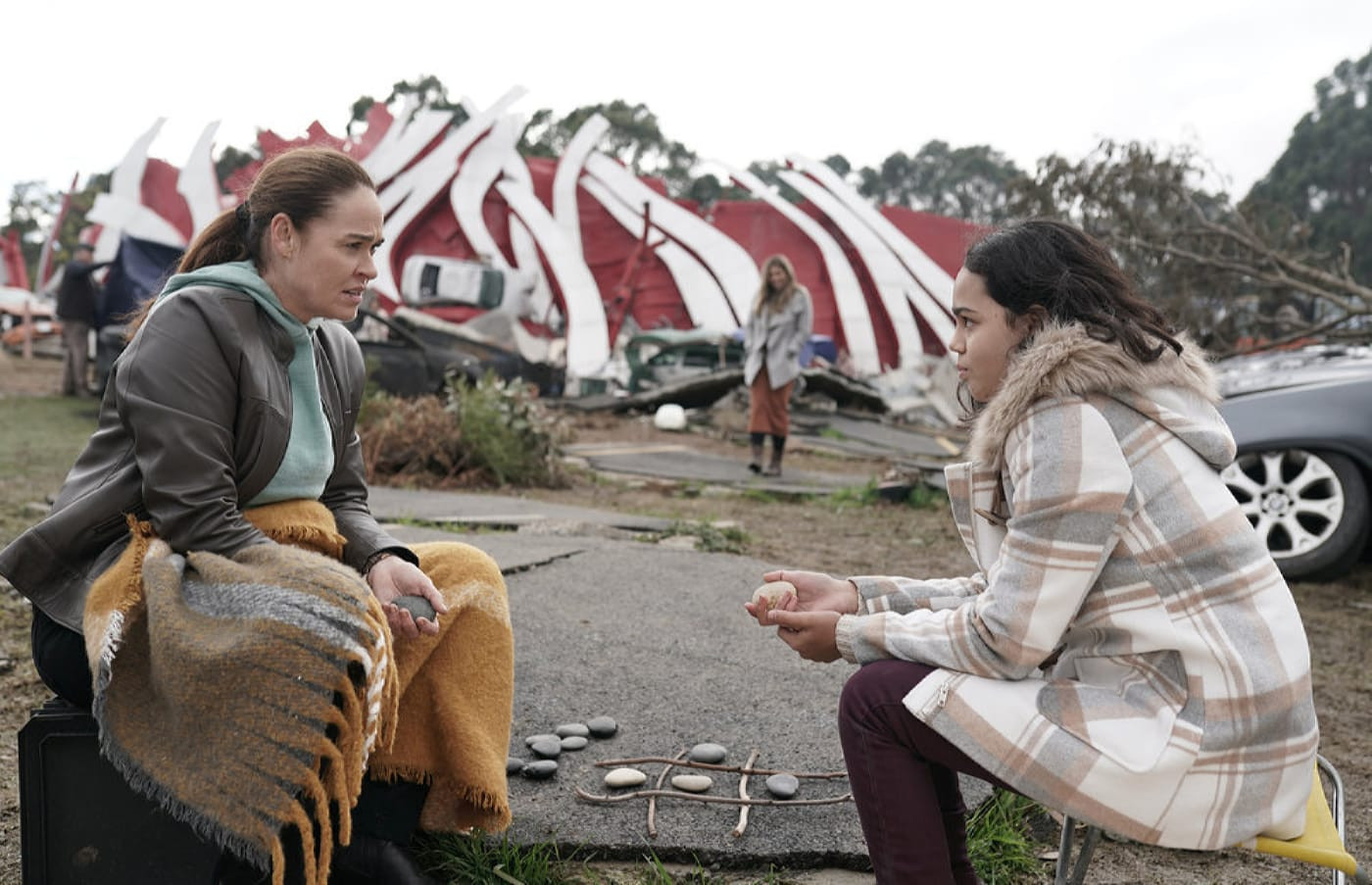 The Lady Birders Of Nepa

I missed 1x05. People head to a closed down store. The evil scientist tries to recreate scenes from the movie. An injured woman needs help. The doctor dumps his bride to be. The mayor's husband demands respect but ends up zombiechow. This was okay. The mayor set up her husband's death and the death of her rival.

Tags: day of the dead, grimm, la brea, review, scary 1970s tv, supergirl, the devils throat, the perfectionists
Subscribe
Comments for this post were disabled by the author