This is a real thing?

“Who has a morgue in their house?”

'House Of The Dragon' teaser

Simon Rex goes for that Oscar.

My ex ignores me. He abandoned me. I'm discarded. So much for lifetime commitment. My ex remains indifferent. Why a sudden and tragic end to my relationship? My ex has no sincere sympathy, regret or sorrow. My ex has cruel indifference. My ex abandoned everything we'd built and I'm completely lost as to why.

'Escape The Undertaker' – he's fat, bald and wearing a wig. This was not fraught and does not subtly foreshadow. This was not cohesive. There are causal horrors and slipshod cruelties. This was overlit and has no complex tension. This does not deeply entangle. This was not compelling. There are no big emotive movements. This wasn't even modestly interesting. The acting is terrible. This was pretentiousness and there was no playfulness.

“Not the homecoming he envisioned.”

“Donated items from other people's households.”

“Left you for another woman, and they went off and had a baby together, even though he'd never wanted to have a baby with you.”

“Long since forgotten the responsibilities that come with the role.”

“Adored him for decades.”

“Would not give a reason for his stance.”

“Compelled to avenge her own misery.”

“Those decisive moments when the choices we make about what, or, who, to believe can change the course of our lives.”

“Tend towards a less confrontational school of experimental theatre.”

“Loudly take credit for what you do.”

“Affords no protection under the Geneva convention.”

“Arbitary half baked concept of logic.”

“Nuking the ocean is the only way we're going to get rid of the sharks.”

“Make furntiture out of the media's bones.”

“The middle class are poor.”

“I didn't get 3 women to marry me by breaking promises.”

“Why are you looking at me? There's a tv in the room.”

“Only 1 of your kids you've never had to bail out of Sea World jail.”

“Get drunk and eat chips.”

“Nothing to have but all you could ever want.”

“Having a nice stare.”

“Evaporates from the internet.”

“Secret Service guys with their earpieces.”

“You hide because you've got a reason to hide.”

“Born as he was of a lowly tavern strumpet.”

~
Watched 'Murder At The Farm' 1x02 – a groupie has an actual wall of crazy. The convicted killer has self pity and never once mentions his murdered family. There was 80s hair and all the murders were for £436,000? The killer had an ugly side and bizarre avaricious behaviour. This was okay.

“Something's wrong with this case.”

~
Robert O'Reilly was in 'Murder She Wrote' – he was bug eyed even then. 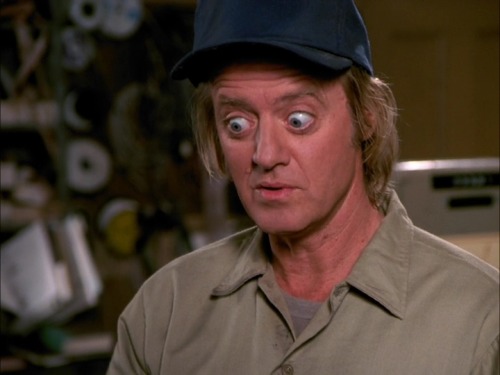 “Some talk she'd married her first cousin and that was why Ernest was the way he was.”