Bill's mewling man misery inspires resentment. Bill has non development just woe is me dramatics. Why the writers thought viewers would care about Bill (Jay Duplass) the self entitled alcholic is an utter mystery. He's self indulgent with no focus or purpose. Bill causes bad feelings and negativity on campus. Bill is a figure of hate as he is everything society does not tolerate these days.

Bill's reputation is under fire due to his act of irresponsibility. Bill is a stupid, venal, ludicrous, dangerous, ghoulish and snivelling man. Bad advice is dispensed. People are on precarious paths. Bill wouldn't apologise and so was shamed and suspended and banned from campus.

Bill demands Ji-Yoon defend him. There is cultural conflict. Bill is excruciating. People wreak havoc. There are sombre undertones. This is not a comedy. Bill lives in self created vicissitudes. Bill is intrusive. Old white people whine. Students complain.

This was horribly believable. Ji-Yoon's horrible horrible brat daughter brats. Bill thinks he can spout his opinions with impunity. Bill is a self absorbed narcissist. Regret is an unknown concept to him. Bill spews clumsy bluster. Bill is almost cartoonishly repellent. This was contrived and obvious. Bill has awfulness and hubris.

A sullen man is sullen. Bill is tawdry. Morel hysterics lurk. Bill is unfulfilling. Why does Ji-Yoon trust Bill to babysit and homeschool her brat daughter? Bill causes deadening frustration and one despises him. Bill has entitlement and is indulged. Bill irritates. Ji-Yoon seethes with indignation.

Old faculty members whose lectures have been unchanged for decades no longer attract students unimpressed by boring scholarship. Yaz wants tenure and teaches via improvisation, role playing and rap. Elliot Rentz teaches 'A Survey Of American Letters 1850-1918' and has fraught relations with Yaz. Bill needs to rectify his behaviour. Bill had total impunity until now.

Joan (Holland Taylor) fights students. Bill has a chaotic life. Bill aggravates and there is absurdism. Bill is a debacle. Yaz has passionate intensity. There are thorny issues. Amanda Peet co wrote this. Bill has a detrimental impact and is supurious and arrogant. There is miscalculation and macho hubris.

“Judged himself by the number of his followers.”

“All going to resolve itself.”

“Someone had to make dinner.”

“Spend it in Tranquility Briefs.”

“No one takes his classes anymore.”

“Rule the profession for the last 40 years.”

Black Mask rants. I've seen better baddies in the old Adam West show. Ryan and Mary babble. Black Mask uses venom. Alice does something disgusting to Black Mask. Ryan gets off parole. Kate is saved. Luke plans to be the black Batman. Kate leaves to find Bruce. Jacob is already gone. Sophie is ditched and dismissed. Ryan's birth mother isn't dead. Alice is still locked up and hasn't reformed like she did in the comics. This sucked.

“Bitch shot me with a crossbow!”

~
Dusty Finish
Jack sabotaged his brother Ace's big chance at the big time for petty spite. This is a Starz drama about 2 brothers in a small town and their family's indie wrestling show that they perform in what looks like a shed. Not shockingly interesting. The DWL worry about the fallout from Jack's selfish action. The FWD wants to bury the DWL. Ace sulks and screams. I haven't seen 1x01. Ace and Jack's mother rants about sluts and jezebels to Ace's girlfriend. The FWD guy correctly points out that Jack pulled a company killing move turning the DWl's one star, Ace, into a joke.

The FWD guy is told he knows nothing about the business' history and how he exploits poor people. Will Jack's ego be the downfall of the DWL? Jack is an angry swearing egomaniac and is played by Stephen Amell of 'Arrow'. A valet wants to be more. Jack won't say sorry, his wife talks and talks and talks and talks some more. Why is Jack such an ass? One has unabashed hatred for Jack. Ace sings in a bar and is mocked by drunk rednecks for his fragile ego. A bar fight is done via wrestling moves. Jack is not a kind person. This is okay and this all take splace in the forgotten town of Duffy. The DWL wrestlers don't trust Jack. As Ace is in pain, Jack rants about Ace being a washed up footballer player and Jack being broke and having a kid he does not seem to want. Jack's wife shoots squirrels.

Best Lines:
"I say that with frustration not affection."

"Borrow some of your wife's makeup!"

"Get drunk mowing the lawn."

"Start a territory war like it's the 80s all over again."

"No one makes their living from wrestling anymore." 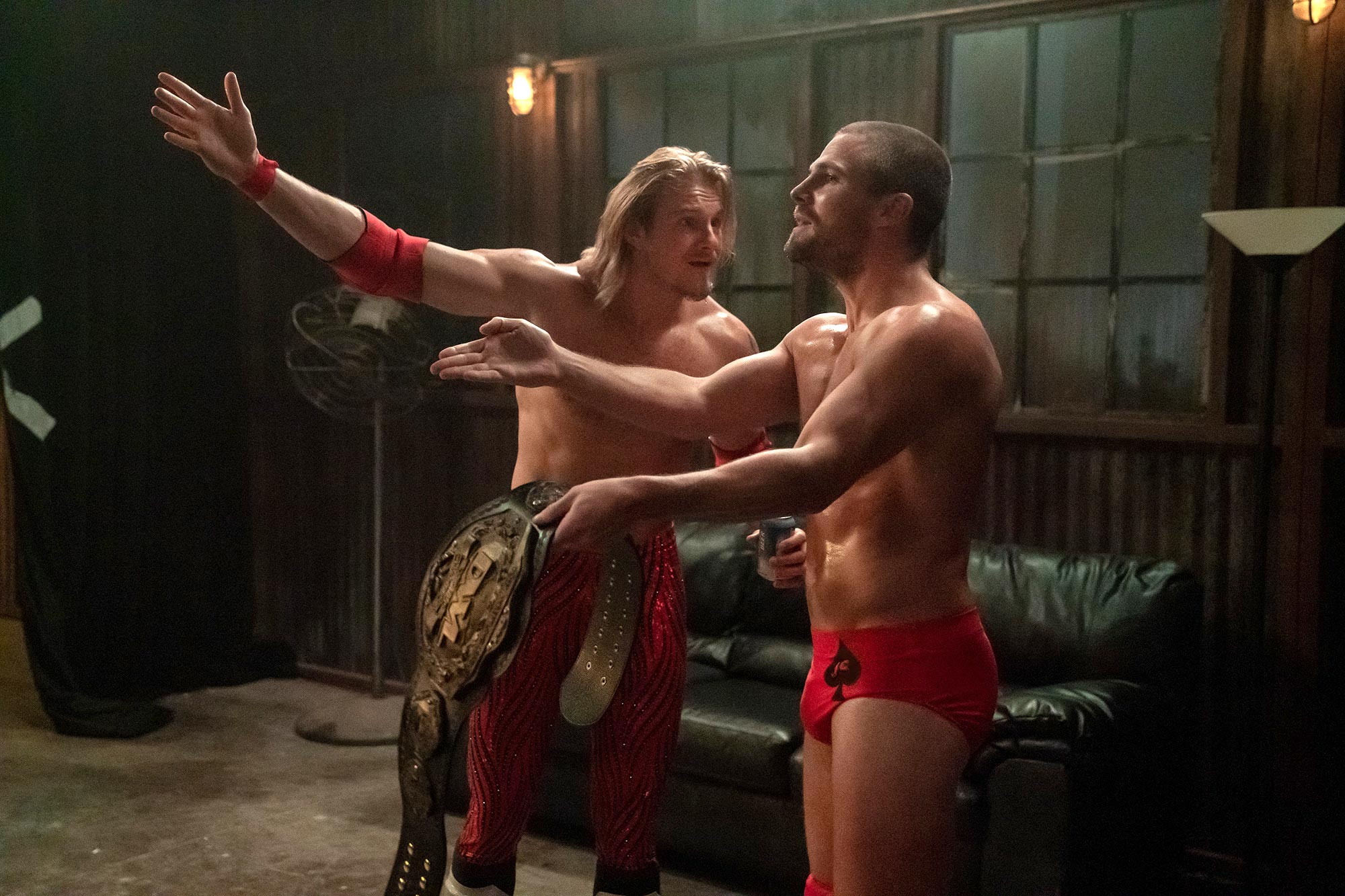 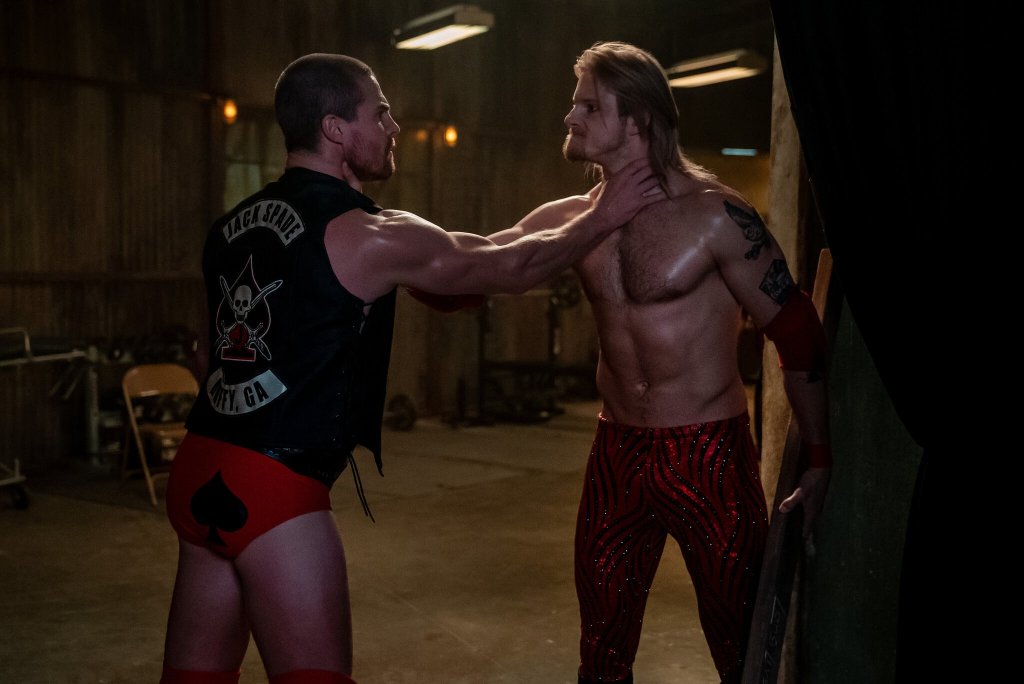