This one-shot is a Mirror Universe take on Janeway and co who in this universe are social sewage and walking cesspits. This has a painted look. Janeway and her rebel crew plunder and encounter the MU Kes and Neelix. MU Chakotay looks like a gangbanger. Subtle. Why are Janeway and co wearing uniforms that look like the real world ones?

MU Kim is boring, MU Tuvok is useless and MU Cavit is usurped by Chakotay. MU Janeway has decent hair. MU Annika Hansen shows up. Her existence and the existence of the EMH make no sense. MU Paris bores. MU Janeway seeks out the Borg. Why is MU Torres on the ship? What became of MU Annika? What'll happen next? This was okay.

“As we stripped them of supplies and left them to die.”

“There's no need to thank it for anything,”

“In case you ever managed to board.”

Larry is so cute.

“Tired of this nonsence.”

“The healing he called for, wasn't on show.”

“Allowed Labour to be taken over by a group of public school educated Stalinists who proceeded to lecture voters on their own moral superiority.”

“Said precisely nothing, but took some time.”

“What argument did we win?”

“A day of National Shame!”

“Touching space with a tentative finger.”

“Choose you as a life partner.”

“Fixated on losing the relationship.”

“The appendix wins no praises for good design.”

“Pressurised into something I didn't want to do. In 2019, that's called coercion.”

“Stripped of those personality traits.”

“That day has gone.”

“No prospects of a job.”

“Found hiding behind a nearby bin.”

“A position of silence.”

“Glory in their ability to wreak havoc.”

“A debilitating effect on his judgement.”

“Firm views on the sequencing of arrivals to the Christmas crib.”

“I am married to satan himself.”

This 1983 novel is apparently 'a novel of terror' – no, it is not. Considerable harm is inflicted by the legacy of a dream experiment. Dreams become real. Or something. Characters names change and there are no terrifying results or serious repercussions or serious consequences. This was boring and full of inherently volatile morons and the plot and ending make no sense. There is no objective certainty or fear and this isn't truly distressing. This never incentivises you to care, there is total uncertainty about what this was about and this was not macabre magnificance. This is so bad, it leaves you stupefied. Sexism is shrugged off. Characters are reprehensible. This causes a lack of interest. This isn't horribly unsettling and the oddness appears to be wilful. Characters go on self-pitying rants with varying degrees of shrillness. This was dreadful, ideologically rudderless and ill-defined. It was also infuriating and downright appalling. There is no compelling reason to read this.

“If you don't watch out I'll have you seen to.”

“You'd better flinch, young lady. You'll do more than flinch if you ever say anything like that to me again.”

This badly written 2001 scifi novel about a space station copiously rips off 'Babylon 5' and 'Star Trek: Deep Space Nine'. This makes no sense and has an incessant torrent of exposition. It also has a sequel. This was ignominy and interminable enough.

This latest Newman vampire tale was exceptionally strange. It was also horrendously boring. The book nobody asked for turns out to be the book nobody deserves. This was horrendous, stupid and irrelevant.

“The Diogenes Club didn't want to have to explain itself to Peter Mandelson. The Prime Minion could turn into fog and seep through keyholes.”

“Any number of Awful People lived in the world.”

“The Frank Stallone of Transylvania.”

The mother is stupid and bullies Lake. The mother kidnaps Lake herself and hangs out with drug dealers. Someone finally arrests the crap mother. This was crap.


Day 10: Fade Out
Lake is kidnapped AGAIN. This is all to do with the mother's bad cop show. This was boring and DUMB. I'd rather be watching 'Cult'.

Melinda learns a jetliner will crash. She has visions and bad hair and make up. This tries so little. Melinda learns the crew and passengers of the jetliner are dead due to lost pressure and that the plane is still in the air and will crash soon. But what plane and where will it crash? This was dull. The plane crashes and loads of ghosts show up.

A rich woman is in a coma. Was she poisoned? Is this a take on the Von Bulow case? Her latest husband and daughter and doctor are all suspected. The woman's doctor is called Shipman! There are lies and reveals and games. They all did it! This was okay with a downer ending.

“Even your houseboy noticed.”

“Idle rich and their idle hands.”

Cole Sprouse of 'Riverdale' stars in this sick teen romantic drama. 2 sick teens form a romantic bond. An annoying manic pixie dream girl livestreams her hospital room. She has cystic fibrosis, something it takes a while to learn. Where are her family? They barely visit. She may never live independently again. She wears a face mask and looks like a protestor.

There are escapology attempts and no one to one caretakers. There is no fragile vulnerability or pathos. The MPDG is rude to a teen boy who has the same cruel and unforgiving illness. She's irritable and they are told to stay 6 feet apart. She's awaiting a transplant. He's not. Who's paying for their health care? He seems to have no visitors either. There is exposition and no sheer panic. There is guilting and shrieking annoying teens.

They're on a drug trial. The MPDG is such a bitch and won't hear reason. She has no empathy or compassion. She whines and is OCD. This causes grave misgivings and this is injurious to sense. This was pathetic. The MPDG whines more. People have to deal with the result – whatever that may be.

People face up to hard choices. There is trouble ahead and they need to talk about it. They're sick and people avoid reality. She gets a transplant. Which leads to chaotic catastrophic consequences. This was not endearing. What will become of him?

“What would I do without you?”

“There's no coming back from that.”

“Can you stop reminding me that I'm dying?”

“Next life but an inch away.”

~
The Death Of Stalin

It is 1953 and there is rancour, fear and adversarial exercises. This is not an era of responsibility just an era of existential terror and rage. There is displaced rage and fear when Stalin has a stroke and then dies. There is grim lunacy and ever more crazed reactions. No one is morally clear sighted. People are moral disasters and there is piss. People spew excoriating verbal abuse. There are real accents and a pitiless world. Stalin's daughter is an idiot. There is a succession crisis that gets farcical. Zhukov the war hero steals the show. There are no positive or reassuring acts. People get shot. Beria is an arse and makes enemies. Too many enemies. This was good. More Jason Isaaacs!

“I will take that as a compliment.”

“You're obstructing the story.”

“Nobody's going to get killed,”

“Soviet planes do not crash.”

“I f**ked Germany. I think I can take a flesh lump in a f**king waistcoat.”

“All the best doctors are in the gulag or dead.”

“Lying face down in a ditch full of vodka.”

“Run and plot at the same time.”

“In town with their guns.”

“I should have you shot just for saying his name.” 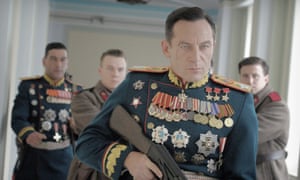 This BBC2 drama is a take on a true story of a 12 year old boy on trial for murdering his vile abusive stepfather. He and his older brother hacked the creep to death. This was PC and the mother is useless. She stayed with the stepdad even after he attacked her oldest son with an AXE! The neglected boy is bullied at school and there is a perceived lack of concern about obvious abuse and neglect by all. The stepdad thrives on the terror he causes in others. He's a bullying partner, the sort of man who routinely shouts at everyone, and treats his family worst of all. Ray wasn't seen as in need or at risk. Ray was the carer for his half-siblings and mother and used a grant to clothe his half-siblings. He is acquitted and his half siblings put in care. This was okay.