This conspiracy theory documentary about Kurt Cobain's death is taste free. Double denium is worn and I suspect Danny Rand in 'Defenders' was styled to look like Cobain. Courtney Love is balmed for leading Cobain to destruction. The director insinuates that Love caused Cobain's death.

Cobain's difficult upbringing is explored. He had to live with a schoolteacher and under a bridge after being kicked out of his house. Cobain is spoken of with reverence and sentimental devotion and Love's music career is dismissed. Cobain's parents seem awful. But there is widespread distain for Love from everyone. The continuing ire for Love is distasteful. Aggression toward Love is the norm in this documentary.

No wonder this has attained notoriety. The director is noxious yet steeped in reverence for Cobain and pelts him with praise. Cobain's weird art is shown. What caused the director's relentless vendetta against and hostile reaction toward Love? The director asks leading questions and is no Louis Theroux. He bothers people and whines about music rights. Cobain's mysterious stomach pains are mentioned. The director listens to Love's vile grifter father and his crazy allegations about Cobain's death.

Edward Norton and Ireland are mentioned. A bitter ex talks. There are 90s eyebrows and why is the director always wearing those headphones? Cobain's obvious drug issues and mental health issues are ignored. Love is painted as a gold-digger and a murderer, allegedly. A dodgy PI and a drugged up best friend and paparazzi and a pervert talk.

The director rants about English libel laws. Some flake talks. They are all liars and there are persistent rumours and damning criticism and non benign cranks. This was entirely inaccurate. Love faces critical ire and is accused of wanting to reflect in Cobain's glory.

There is no clarity to this. There is legal resistance to the director's, Nick Broomfield, claims. There is no calm sense. Idiocy prevails. Broomfield feels Cobain's death is attributable to Love. There is no moral or ethical case for this film's existence. Love's dad relates with zero regret her terrible upbringing. Nobody is endearingly honest. Broomfield does deliberate inclusion of cranks.

There is no complex truth. Cobain was apparently a big source of status for Love. Her own talent is dismissed. Cobain dismantled his own life and career. The worst excesses of drugs are obvious. This is a war on truth. One is wary of Broomfield's motives. One finds only hostility to Love in this. Broomfield hints at a cabal protecting Love. None of this makes sense.

Love is accused of trying of trying to bludgeon someone with Quentin Tarantino's Oscar. Even as a teenager Cobain was well beyond the reach of help. There are ulterior motives all round. Nothing is substantiated. This was deeply intrustive. Shane McGowan's wife is interviewed and Love is treated as Yoko Oh-No. Larry Flynt pops up at one point to add to the madness.

“I wanna keep my music pure.”

“Repainted it and removed all the syringes.”

“Came up and threw a drink in my face.”

“The strength of feeling directed against her.”

“Punched out other rock stars.”

“Got in a punch out on the street.”

“David Bowie with all your mock rock star poses!”

“You stole my career.”

“I'm getting worked up here!”

“Not the most reliable witness.”

“A lot worse has happened to other journalists.”

“Punched out a couple of my friends.”

“I grew up with hippies.”

“Nobody is exempt from pain.”

Gregory Peck does a terrible Irish accent as a Vatican offical helping allied POW escapees as Christopher Plummer sneaks. This was corrosively bad.

James Wood stars in this bio-pic which is an absolute disaster.

This true crime story was written by Amber Benson (the Amber Benson?) and it tells the story of international icon Oscar Pistorius and his sheer determination to compete. Until his ugly murderous rage caused him to fall from grace and become one of the most reviled men in the world. He dated and abused Reeva Steenkap and finally killed her.

There is bad acting. Oscar acted like he owned Reeva. There are loud South African accents. Some people fawned over Oscar. The full extent of Reeva's injuries aren't shown. But Oscar's verbal and emotional abuse of Reeva is shown. There is green screen and guns and Oscar was toxic masculinity defined. Oscar engaged in coercive control.

Oscar was blonde but the actor playing him isn't. This is told in non-linear fashionThis does not leave you fully engaged and it has no emotional clout. They show Oscar murdering Reeva in a fit of rage. One abhors Oscar on principle. This was terribly sad.

“You make all the rules.”

“Someone steals it and sells it.”

“What do you mean died?”

“That you are worthy of me and this relationship.”

“You arrested me for assault.”

“I'm scared of you sometimes.”

“I heard them throwing things.”

“They bear you no animosity.”

“Why would an intruder lock himself into a toilet?”

Alix really was the worst. Rasputin is sinister. Anna Anderson is mentioned. The Romanovs were detestable individuals.

'Death Dive To Saturn' was okay.

There is sheep soup?

'The Last Czars' had a lack of narrative sophistication.

It takes Saturn 30 years to go around the sun.

I no longer have a place with my ex. His deathly silence hurts. My ex and his ugliness wanted to sentence me to a lonely miserable existence. To hell with him. My ex was unaffectionate and resentful of the emotional labour of being in a relationship.

“Mummy and Daddy ain't got no money.”

“That's his attempt at serious thinking.”

“An extraordinary tale of nailed-up letter boxes and a mysterious stranger rerouting a legal notice.”

“To come from where he did as a complete political outsider to where he is now is without precedent in modern American history.”

“It would be a waste of everyone's time!”

“Heroes don't have henchman! They have sidekicks! And believe me that gets weird fast!”

“What is with the short shorts?”

“When did she have the time to build death-bots?”

“Tolerates no views which diverge from his own.”

“Without sinking either her career or his.”

“Devoid of any social dimension.”

“Multiple cars parked on the lawn in various working states.”

“Will know no good can come of this.”

“Lived in squares, painted in circles and loved in triangles."

“The nothing you came from.”

“Doing god knows what with a vagrant!”

This deliciously good novel is about a mysterious small town with a secret. There is no realm of reason and the town has a darkness at its core. The inhabitants are locked in an invisible prison of fear and insecurity. People have a grim and wonderful determination. There are dreadful revelations, greviously immoral people, a whiner, trust issues, powers, an elusive past and people react badly when the subtleties of their world are challenged. This seems to be the start of a series and I wish to read more. This was excellent and pleasingly wicked.

“He was the reason his whole family left town.”

“Nobody would ever stay here if they had a choice.”

“That place where nightmares dwell.”

“Useless, futile stand against the inevitable.”

“Something bad is coming for us.”

“Of course, there's a creepy attic,”

“The ugliness that lurked within the families who supposedly protected them.” 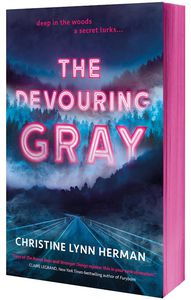 ~
Island Of The Sequined Love Nun by Christopher Moore

This 1997 novel is sexist and racist and it was all cold patronizing distain not a comedy.

Angelus was a right nasty bastard. Who was The Master who gave Angelus orders? What became of Marius? Lilith shows her true form. A demon thing makes a girl do something horrifying to herself. Fred is in a nutward in Sunnydale. How? Why? Who is the weird woman she sees? How was Angel at the nutward to rescue Fred?

Everyone hates Angel, he is tolerated. Who is the diabolically calculated baddie? Angel does intense and furious smouldering. Why are girls being made to do truly ferocious attacks on themselves? Angel feels shame and loathing. This 'Angel' re-invention wasn't long awaited. But it is good. Are the unimaginably shocking crimes really greeted with quiet resignation?

“We are the darkness that hides the stars.”

“Humanity does not matter. They are standing on a world never meant for them.”

“Sunnydale is a place that will pretend this didn't happen.”

“All the little gates and houses and lawns. This is where the monsters live.”

A Dominion sensor array needs to go. Damar (Casey Biggs) is angry. Weyoun wants Dukat to smile. Ross monotones. Odo's awful. Kira sets up a Resistence cell in the suffocating existence of DS9. Kira has poufy hair and is hellbent on hostile acts. Dukat has a permanent rictus scowl of anger. The UFP faces trauma and adversity. Odo has vapid self-obsession and petty grievances.

The entitled, petulant and smug female shapeshifter shows up. Odo is greviously immoral. Dukat wants his faded glory back. Odo's inexplicable behaviour goes on. Sisko is implacably opposed to the Dominion. Sketchy weirdoes lurk. Rom is arrested due to Odo. There is wildly inappropriate creepiness by Odo. The array attack is not shown. This was not good at all.

“You started a fight in my bar and now you're getting a promotion?”

“Stood in judgement of you.”

The Dominion war wages. Dax whines. Sisko plans Operation Return: the retaking of DS9. Odo does the deed with the female shapeshifter. Odo is an idiot. Weyoun reveals how the Vorta were bred to be servants of the Dominion. Rom is to be executed. Damar plans to take down the minefield. Kira beats up Damar. Nog gets promoted. Another MASSIVE fleet is seen. There's a ship called the Sarek in the giant fleet. This was okay.

“Even the Klingons are starting to wonder if we can defeat the Dominion.”

“We are way way past sorry.”

Batman has lost the cold vicious rage he had in seasons 1&2 at criminals. Robin drives the Batmobile with Alfred hanging off the back. This show never delved into the Bat mythology. At this point the show was being wearily dismissed. Eps like this only eroded support more. No crimefighter has learned to be extremely wary. Robin falls into another incredibly obvious deathtrap. This was not incredibly special.

This was miserable. Batman admitted in 'Return Of The Caped Crusader' that be became Batman due to an excessive need for admiration. Aunt Harriet shows up: PISS OFF! Why is Robin such a seeming idiot sometimes? You can see TPTB's palpable distain for their own show. Robin's womanhandled. Why couldn't they have had more well known adversaries from the comics on this show?

“Let him perish there.”

“I was down to my last African Death Bee antidote pill.”

This was not even a dubious pleasure. Egghead and Olga are back. This was a dispiriting experience. Olga and Egghead seem like the sort of people you might normally see eating out of dustbins and shouting. This was not bracingly different. There is no fixed point of sanity in this show which is not tension filled. Batgirl does a dance routine. Batman has stains on his Batsuit. Stop the pain.

“Trouble in a green fright wig.”

“The concept of decency is alien to the criminal mind.”

“I'd sooner trust a snake with fangs at both ends!” 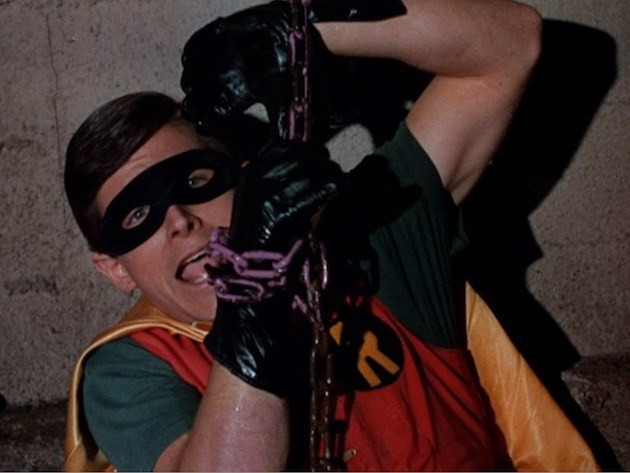 This is a South Korean take on the original US show. The opening credits are okay. This was subtitled. There is a disaster and people whip out phones to film it. Men in grey suits talk. There is endless padding and flashbacks. This was all ineffectiveness. We get the Kiefer Sutherland character who becomes acting President. We also meet the Maggie Q character who investigates. There is a moral rout and the chaotic aftermath bores.