F6: Twister (2012)
Richard Burgi and Casper Van Dien star in this pretty dreadful and somnambulant mess.
~
Neds (2010)
This was an endless process of bad decisions by a gang member who is slightly pathetic.

Angel Issue 1
Angel’s imposed destiny goes on. There is a flashback to Angelus. Who is Francis? Angel doesn’t photograph. Who is Lilith? Is she the Lilith? A friend of Angel has a daughter who is bewitched by something. What is the big bad? It must come from a source esoteric and arcane. This is a good gloom-fest. Angel broods over his past life and behaviour. He’s self hating and has a moral mandate to help others.
Best Lines:
“The light only exists to make the shadows. And when the light fades, only the shadows will remain.”
“Forever can be cruel.”
“What I’ve done is all I’ll ever be.”
“You had to pick the spooky house at the end of the lane, didn’t you?”
“Something awful has found them.”
~
Buffy The Vampire Slayer Issue 5
There is ugly art. Willow and Buffy are awful friends to Xander. Giles says they can reverse what is wrong with Xander. Namely he is now a vampire. Jenny Calendar lurks. Spike and Drusilla ditched the newly vamped Xander. What is a soul tie stone? Drusilla and Spike have a toxic relationship. The Key is mentioned. This was good.
Best Lines:
“You summoned me to be yours and I am. Eternally.”
“He’s the big brother you never had.”
“Or wanted.”
“You’ll need an escort to get in.”
“He’ll either be devoured by his demon or become it. The choice is his.”
“Bring hell with her......everywhere she goes?”

‘Pennyworth’ trailer
Alfred Pennyworth wants to be his own man? But he’ll be the Wayne clan’s bitch forever! Pennyworth, Thomas Wayne and Paloma Faith deal with fascists in this mediocre looking trailer. His father wants him to be a butler!
Best Line:
“Take back this country.”
‘Yesterday’ TV spot
No.
Daim Dairy Milk - okay.
What is a fried slice?
The BBC are doing ‘The Pale Horse’!
‘Rumpole Of The Bailey’ Quotes:
“Rather distasteful.”
“Malignant youth.”
“The important thing is respectability.”
“Lady pupils.”
“Producing a lot of by-blows.”
“I hope your sandwiches come from British Rail!”
“Corrupt her morals.”
‘Channel 4 News’ Quotes:
“Notably didn’t do.”
“They don’t like you.”
‘The Irish Times’ Quotes:
“Wisdom Literature.”
“Lived semi naked in a barrel.”
“Mastery of the century.”
“Deference to government was near-unanimous.”
“Conformist 1950s idyll.”
“Unwanted by the school community.”
“Cultural norms.”
“The only hotel in Manchester willing to accommodate the Sex Pistols.”
~
On ‘Hollyoaks’: Ste neglects his children and wallows in self pity. Where is Tom’s daughter? Maxine is selfish. Ste is approached by the police. Nancy moans. The copper who was bothering Ste turns out not to have been a cop at all. Ste’s stupid and ignores clear warnings. Ste’s thankless to Leela and continues his dismal performance as a human being. Ste’s stupid and gets a racist tattoo. He’s HIV positive! There are unforeseen consequences to come. Ste suddenly values his family and friends less.
Best Lines:
“Thank you very much for destroying my last chance of happiness.”
“You’re not welcome here.”
“Brotherhood is loyalty.”
“Back on the ale, drugs will follow.”
“They are dangerous men.”
“He’s left me! I can’t believe that he’s done it!”

By Inferno’s Light
Dukat is haughtily disdainful as Cardassia joins the Dominion. This was unconvincingly serious. The Jem’Hadar fight club drags on. There is bad acting. Gowron shows up. There is ominous lamenting. Dukat is utterly unwelcome. The Romulans show up to help the UFP/Klingons. There is a too easy escape. This was okay.
Best Lines:
“Makes it harder for us to miss.”
“What an interesting concept.”
~
Pasion
How do clams make people into zombies? There is a shortage of wits. Anne has tenacity. There is no application of common sense. Joel is a moron. One feels better contempt for the idiot Joel. Gerald McRaney of ‘Major Dad’ and ‘Jericho’ guest stars. There is slightly heightened reality and increasingly preposterous plots and no terribly realistic acting.
Best Lines:
“Spent a summer in Greece playing guitar.”
“Make him regular dead.”
“Never met or heard of.”
“Demure and chipper and never had an orgasm while eating a man’s liver.”
“I’m gonna need that skin back.”
“Grumpy pooper.”
A Change Of Heart
Shelia bit one of her own fingers off. Shelia and Joel are stupid and get their daughter expelled and then unexpelled. This was dumb.
Easels And Warpaint
Shelia has had a murderous blackout which leads to her getting fired. A bully bullies. This was not good.
Best Line:
“Psycho cop stuff.”

Suspicious Objects
Shelia and Joel are even more stupid. This was dull. The ruby red clams are seen. They were smuggled out of a deep cave in Serbia. Nobody thought this was dangeorus.
~
The Ogg And I
Egghead and Olga kidnap Gordon. The ailing show coughs up a fundamentally trivial ep. There are many disincentives to caring. Olga is possibly a cannibal and she feels up Batman. Alfred tries to sniff out Gordon. Batgirl has walkie talkies that have frills on them. Where is Batman’s passionate concern for Robin? This was wilfully crap. Egghead gets chickens to lay eggs full of tear gas.
Best Line:
“This stuff is terrible!”
How To Hatch A Dinosaur
Olga and Egghead bore. Why is a lab tech wearing a pornographically short lab coat? People seem to be reading lines off cue cards. Egghead’s crazy. For once, Robin is lost for a holy expression. Robin points out a plothole. Egghead has a zapping machine. Robin is loyal to Batman, who somehow obtained a rubber dino suit, put it on, got into a fake egg and got zapped by radium - all to arrest Egghead. This was not good.
Best Lines:
“What about the water supply Batman?”
“Right. Oh, that’s a favourite trick of Gotham City’s arch-criminals, Boy Wonder.”
“Quiet, wonder midget!”
“He sure turns up in some weird places.”
Surf’s Up! Joker’s Under!
What’s a wild comber? This is a surfing ep. There is surfing in Gotham? Barbara wears an indecent swimsuit. Joker and his brown hair shows up with a hot dog shaped radio and idiot lackeys. A hang out is called Hang Five. A female baddie has a cute fish shaped purse. Dick wears hideous beachwear. Gordon and O’Hara wear terrible disguises. Batman has no self-awareness. There is a prolonged musical number by the poor man’s Beach Boys. Joker’s hair is suddenly green. Batslides feature.
Joker rants like Manson. Joker and his gang handle sea urchin spines which are poisonous with their bare hands to no ill effect but the spines paralyse Batman and Robin. Nobody in this ep can pronounce resin properly. The duo shakes off being inert and being turned into surfboards just because.
Robin is told to head back to head back to Wayne Manor. Where does he keep money in that outfit? Batman challenges Joker to a surf off. Bruce heads up the surfing association. Joker and Batman wear baggies over their costumes. Surfer lingo is shouted. The shark repellent spray returns. This was really ridiculous but funny.
Where did Dick and Barbara keep their costumes in their beach wear? There are really obvious stunt doubles and unchallenged reckless decisions. Joker is driven by stupidity not malice.
Best Lines:
“You mean the one talking to her hot dog?”
“Pig board.”
“Local surfing idol and the hottest wave jockey around.”
“Toss him into a trash can!”
“Cowabunga!”
“How long you ride it.”
“Bruce Wayne’s youthful ward.”
“You immature mollusc!”
“I’m millionaire Bruce Wayne’s youthful ward Dick Grayson.” 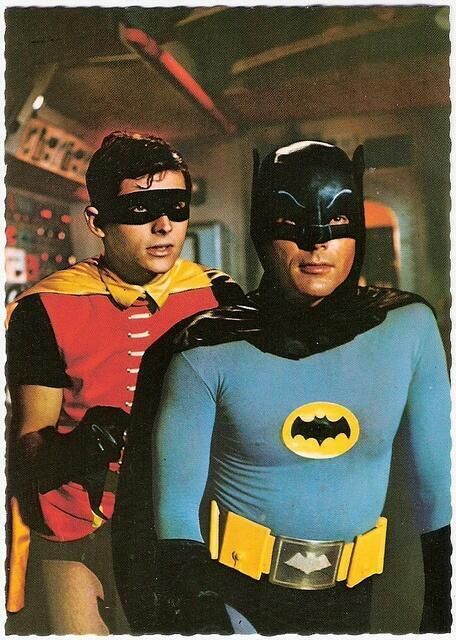