‘Riverdale’ 2x18 promo
A ‘Carrie’ musical is performed. Veronica and Archie are awful.
‘Avengers: Infinity War’ TV spot
Where is Hawkeye? The end is near.
‘Bring It On’ (2000) trailer
Not funny.
‘Station 19’ promo
A show nobody asked for.
‘The Grinch’ (2018) promo
No.
‘Teen Mom: Young And Pregnant’ promo
No.
‘Culchie Club’ promo
No.
‘Agents Of SHIELD’ promo
“Release the ferrets.”
‘True Horror’ promo
Oh I’ll watch this.
Lemongrass & Ginger tea - good.
There will be a ‘Sharknado 6’?
Who saw ‘The Bank Job’ (2008) or ‘A Star Is Born’ (1976) or ‘Jane And The Lost City’ (1987) or ‘Barnyard’ (2006)?
I plan to review ‘The Handmaid’s Tale’ season 2.
A ‘League Of Their Own’ TV show?
‘Legends Of Tomorrow’, ‘Riverdale’, ‘Arrow’, ‘The Flash’ and ‘Supergirl’ renewed. Why?
‘Dave Allen At Peace’ Quote:
“What nothing is it this time?”
‘Blackadder The Third’ Quotes:
“My wife brought armies of lovers to the house who worked in droves so she might bring up a huge family of bastards, I cared not!”
“Ill deserved confidence.”
“Annoy people by pretending that I’m deaf.”
“Sick quietly in a bag.”
‘TVNow’ Quote:
“One of those men who have no problem choking their wives in public.”
‘The Irish Times’ Quotes:
“Long-suffering compliant.”
“Shamed and scolded.”
“Bowel-cleaning.”
“Child-gendering.”
“The world is full of groups who do not, in fact, reject them.”
“The bullying of the individual by a group through rejection.”
“Put manners on them.”
“Sly commentary.”
“Female culpability.”
“Sexual favours performed on request.”
“Who should be born and who should not.”
“That person.”
‘3News’ Quotes:
“Two weeks fodder left in the country.”
“Moralistic ethos.”
‘Sky News’ Quote:
“Rush to blame.”
~
On ‘Hollyoaks’: a hate-flyer about the Nightingale clan is circulated. Marnie does not care about James. The Nightingale clan are guilty of seemingly deranged behaviour. Cleo lies. Differences and conflicts abound. There are disagreements. Marnie doesn’t care about James. Kyle lingers like a stale fart. James is repulsed from his family’s door. This was ineffective. James is treated with visceral loathing by everyone.
The hostility factor goes up and there is a fervent dispute. There is angry sniffing. Alfie engages in personal attacks on James. In response James SHOUTS. There is a direct confrontation and ill-intent. Elly is a bint. There is no painful tension. James has a defiant response.
James suddenly finds Kyle desirable. Alfie whines and can’t act. Alfie finally learns who pushed Mac out the window. There is domestic violence and Sami and his stupid endless vendetta plans to fake Kyle’s murder and frame James.
Best Lines:
“A bad case of lying.”
“Pathetic needy loser.”
“56!”
“I thought better of you.”
“The selfish cow rejected me.”
“Sulky gooby Yas.”
“Creepy little Imran.”
“I’ve been the black sheep all my life.”
~
I cleared out a tape from 2000. It began with an unwatchable ‘Xena Warrior Princess’ ep ‘Paradise Found’ which was full of cultural appropriation and low expectations.
Then came an ‘X Files’ ep ‘Dreamland Part 2’ in which Mulder has been body-swapped with an MIB - something never addressed in season 10. There is over-acting, ineffectual padding and no gothic melodrama. There was sexism in this intellectually confounding borefest.
Best Lines:
“Aside from being stuck with the name Fox which probably taught him how to fight.”
“Pissed away a brilliant career.”
“Now he lives his life shaking his fist at the sky and muttering about conspiracies to anyone who’ll listen.” 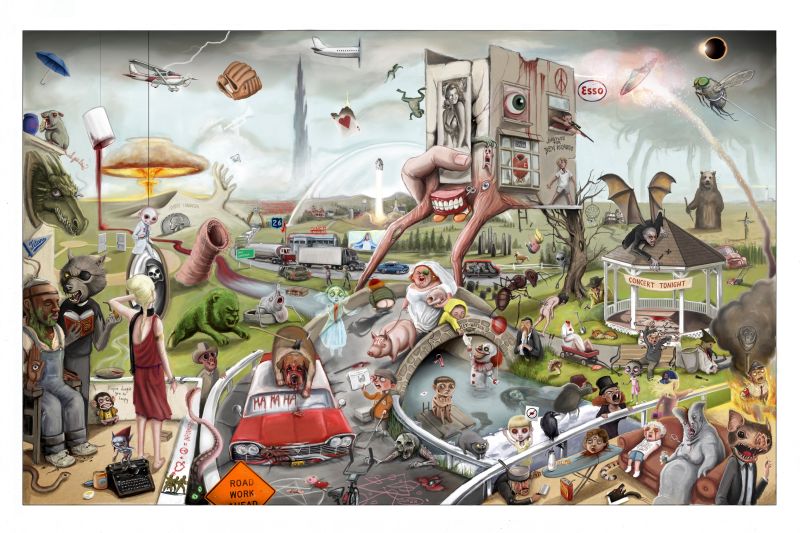 Cracks (2009)
This indie film stars Eva Green, Juno Temple and Imogen Poots. It is based on the far superior Shelia Kohler book. It is the 1930s and at St Mathilda’s boarding school the girls idolize Miss G (Green). An unbearable catastrophe looms. A Spanish student arrives. Wouldn’t the Spanish civil war be on? The snotty students have baseless loyalty to Miss G. There is diving and this is not faithful to the book.
The new girl is bullied. There is isolation, uncertainty and utter unmitigated doom. This was not good, reasoned or well thought out. This unremarkable film was fundamentally insubstantial. There is mumbling and Miss G has obvious issues. This was dull and disjointed.
Best Lines:
“Superstitious and arrogant.”
“A moment of contemplation.”
“Don’t think. Do!”
“A perilous place.”
~
The Perfect Getaway (1998)
Adrian Pasdar stars in allegedly based on a true story TV movie. Kelly Rutherford and Alicia Coppola of ‘Jericho’ co-star. A stunt man named Colt (Pasdar) is a guttural growler and a helicopter pilot. He is hired by a woman (Coppola) to break her boyfriend (Antonio Sabato, Jr) out of jail. There is baggy denim, dated cameras and non-existent security. There are also huge phones, rampant plot illogic and screechy women.
There is bad green screen, convenient parachutes, bad tracking and Colt wants moral freedom. This was not deeply emotional or tense. Coppola is wonderfully evil; sadly this TV movie is a black hole of suck. Coppola is a cold-hearted harlot who did Colt wrong. This has insufficient intrigue or incident. It also has an unconcern with sense.
Best Lines:
“Logic Nazi.”
“Don’t you think that the Feds might kinda wonder why you were doing that?”
“He’s shooting at us!”
“Shoot back!”
~
Rewatch: Warlock (1989)
This cult classic starring Julian Sands and Richard E Grant isn’t actually that good. What happened to the cats and the cat? Why was Kassandra so dumb? Why did she think that metallic silver miniskirt was flattering? Isn’t Redferne a warlock too due to all the stuff he does? Why does Kassandra wear huge sneakers? Where did her VW bug go? Did the friendly Mennonite recover from the warlock’s dark magic? Did Redferne have all his anti-witch paraphernalia under his pelt when he was catapulted to 1989? ‘Warlock: The Armageddon’ was crap and I’ve never seen ‘Warlock III’.
Best Lines:
“He’s got a thing for blood, you know, draw your own conclusions.”
“Witch compass!”
“You ain’t no witch! Witches are girls!”
“Undo all you have wrought!”
“If there are children present, make them absent.”
“Thieving it.”

The Red Tower by Mark A. Latham
This Sherlock Holmes novel is very good. Watson is invited to a weekend party by James Crain. Watson learns his friend has fallen under the malign influence of Spiritualists. Watson must uncover the truth when a séance leads to devastating consequences and a feeling of ominous dead descends on the house.
In between his gruff literary pretension and honest workable commitment to the truth, Watson lives in Holmes’ reflected glory. But one way or another the malign intent of the Spiritualists will be exposed, it is a moral imperative.
Best Lines:
“Stay-aways.”
“Can’t you see what she’s presaging?”
“There are other fanciful tales also, mostly regarding mad ancestors and wronged women.”

The Assassination Of Gianni Versace 2x06
Descent
Andrew hangs out with David and Jeff. Andrew does coke and is all ineffectuality. This was formulaic as Andrew mooches off his latest sugar daddy (Michael Nouri) and has ugly fury and faces moral indignation. Lee shows up. Everyone’s more interesting than Andrew and he’s not exactly impressing people with his fake life and lies. This was not madly inspiring.
There are no moral values. Andrew has screaming rages and gets physically violent and lacks essential decency and self respect. He’s a disputatious unwelcome presence. Andrew was crazy and entirely without any merit. He was adamantly terrible and couldn't muster the barest level of politeness. Andrew did meth and ranted and got no comfort from his equally crazy awful mother.
Best Lines:
“I don’t mind being disliked.”
“Too lazy to work and too proud to be kept.”
“It’s ordinary!”
“Nothing man.”
“I like long stories.”
“I don’t do gutter drugs.”
“Advice? How delightful!”
“Love?”
“Whose love.”
~
Doubt 1x04
Clean Burn
Billy’s mom knows he did it, all the viewers know he did it and yet Sadie still defends him. Sadie helps her ex-BFF. Sadie and her co-workers see themselves as the only moral lawyers in town and see the DA and co as evil-doers. Sadie is a ghastly person who possibly has BPD.
Billy is obviously guilty as sin. The firm handles the retrial of an arsonist who killed his children in a fire and was abusive to his ex-wife. They don’t care about the abuse, the two dead children or his ex-wife. Lawrence Pressman and Carl Lumbly guest star. This was completely meritless. The lawyers shrug off the bad things their clients do. Nobody has moral rectitude.
There are flagrant breaches of the law. Sadie’s ex-BFF is awful. The child killer gets acquitted. Sadie is emotionally abused by Billy some more and declares her love for him. No wonder this was cancelled.
Best Lines:
“Grand standing egomaniac.”
“Our moms were friends in prison.”
“Feeding his disgusting animal natural wilderness salmon!”
~
The Americans 5x04
What’s The Matter With Kansas?
Henry’s taller and being paid attention do. Philip and Elizabeth do constant devaluation of him. Philip goes honey-dicking. Oleg talks to his mother. Elizabeth and Philip still run their fake travel agency. Philip badmouths their ignored son. Meanwhile his other son crosses borders.
Elizabeth goes honey-potting. Oleg does boring things. Stan and co are disgusting. Pastor Tim annoys. Paige snoops. Stan is irrefutably terrible. There is persistent fear and anxiety. Oleg’s mother gives him a talking to.
Best Lines:
“This is who we fight?”
“Take it out of the trash and finish it.”
~
Timeless 2x01
The War To End All Wars
Lucy’s mother is awful and evil. People run around in 1918. Some dude in 1918 has an iphone. Wouldn’t the battery go flat with no way to charge it? Mason Industries is blown up and 6 weeks pass. Wyatt tantrums. I’ve no idea what is going on or why. Lucy hangs out with her mom and evil Emma.
Matt Lanter overacts and Emma bitches at Lucy and reveals she has ensured that Lucy can never come back. This was not perennially surprising. Nobody has moral values or standard ideas of morality. Lucy kills a guy, cue emotional ramifications. Marie Curie and her daughter Irene show up doing x-rays for ungrateful doctors in 1918. Wyatt finally asks some questions. Mason whines.
The baddies are planting sleeper cells throughout time. An unimpressive new baddie shows up. Poor Flynn is locked up and I did not like this.
Best Lines:
“American Committee For Devastated France.”
“We need to talk.”
“Not to you.”
“A bunch of ranting like ‘Mein Kampf’ by Philip K Dick.”
“It’s all come to pass.”
“Somewhere between ‘Hunger Games’ and ‘Handmaid’s Tale’.”
“All run and gun.”
“That’s not troubling.”
“What regiment are you with?”
“The black one.”
“How long has this guy been here?”
“His body’s riddled with shrapnel.”
“Take it out!”
Collapse