A jerk father is a jerk. Reporters are stupid. Troy and Dillon look like actors saying lines. Apollo and Starbuck had simmering homoerotic tension, Troy and Dillon have nothing. Troy and Dillon are a younger generation of upstarts with 80s hair. The narrative is discordant. The annoying reporter bint annoys.

There is no simmering tension just unbelievable happenings. This show is sheer implausibility destined to be forgotten. It's cliche ridden and the absurdity of this eye-wateringly ineffective show makes you gawp. This was a terrible miscalculation.

Dr Zee invented time travel. To think Troy is Adama's genealogical legacy. Where did Dillon come from? Why in 1x01 – was Troy not living on Galactica? Dillon and Troy fasten their jackets. There is no powerful dramatic impact. How can Dillon drive? There is no imagistic potential or frightened realism. Dr Zee has calculating rationality. Adama is mock-magisterial.

TPTB cancelled this show as 1x11 was filming. Apollo had elegiac idealization of his father. This show was a breath of stale air. Since when did vipers seat 2 people? The winy reporter whines. Will she shut up? Why was there a spare viper helmet for the whiny bint? Boomer is alive and is now Adama's XO.

The idiot reporter blunders. Why don't Troy or Dillon have a reaction to the holocaust unfolding in front of them considering the fall of the 12 colonies that Adama called a holocaust? Why whenever there is time travel in sci-fi are the damn nazis involved?!?!

Dillon blows up a V2 with his laser. Militatistic men who live in a world with so few women strut around. The messy realities of life are ignored. This was dominated by male dominated militarized hegemoney. Who make the rag tag fugitive fleet's clothes? Where do they get fuel? So much for Troy and Dillon trying to stay safe.

The reporter babbles about D-Day. Xavier gets away. Richard Lynch growls. Dillon and Troy laser a jukebox and an annoying kid annoys. Then more annoying kids annoy. Troy and Dillon bother the annoying kid who is named Willy – you'd think Willy and Troy would bond over being horrible entitled whiny children.

Xavier lurks. What is he using for fuel? Why doesn't Xavier mention Troy's stepfather Apollo?

“The Council has never over-ruled Dr Zee, he has never been wrong.”

“Being kidnapped, live on instant news.”

“A horrible man by the name of Xavier.”

“The Allies have landed in Normandy.”

Katie McGrath features in this oz miniseries. This was bad and horrible and a creepy stalker lurks. This was fairly ludicrous.

“Choosing the gardener over me.”

“How many times didn't it mean anything?”

This is part 1 of 3. Brent Spiner and J.G. Hertzler and The Big Show guest star. There are  Augments, Arik Soong, Orions and Klingons in this strangely inert ep. Augments and Arik are self absorbed, pretentious, entitled and condescending. The Eugenics Wars are mentioned. Augments are a malevolent force. There is no real source of meaning here. Calling this Trek is like arranging ingredients in a bowl and calling it food. Archer clenches his jaw.

This loses coherency. This does not match up with a later reveal about the Orions. The acting in this makes 'Galactica 1981' look like the work of Orson Welles.

“First ships to colonize the system were nuclear powered.”

“Not even my last wife sold for that much!”

"Humanity is no longer relevant." 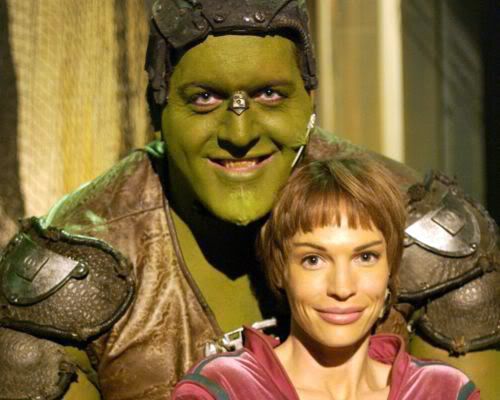