Earthlings Welcome Here
Sarah attends a UFO convention as part of her 3 dots obsession. She ends up shot and hallucinating in the desert. Meanwhile Riley whines and flashbacks reveal her traumatic origin story. Riley is seriously annoying. Jesse acts vile. Ellison broods as the reason for his marriage break-up is revealed. Cameron gets more annoying by the episode. This ep was fairly okayish but this show's plots are way too mish-mashed. The same exact plots repeat: Riley has melodrama, Sarah acts bitchy, Cameron is unsympathetic and John is a non-presence.
Best Line:
"Cows are more powerful than man Mr Ellison, but I'd still rather be the farmer with the rifle."

When Worlds Collide
There are mysterious goings on and deaths at a charity. The team investigate and uncover a murderous long con. Megan quits to go and be an Earth Mother in her new job. However the Don/Charlie subplot is the most interesting part of the episode.

TPTB finally remember that Don and Charlie are brothers just in time to do a plot where they disagree over a case. So Charlie gets up on his high horse soapbox and in a fit of pique does something illegal. Charlie is arrested and can no longer work with Don on cases. Charlie begins to be regret his deeds as Don heads off to work. Charlie needs to buy a stepladder and get over himself already. This was a good episode, mostly because the brotherly interaction returned. Still the ending was very rushed.

The show returns and stupid Stephen is dead. So a new team member Sarah (played by a actress who used to be on 'Footballer's Wives') replaces him. A giant crocodile shows up in a museum through an anomaly centred inside a bizarre Egyptian sculpture called the Sun Cage. Cue Sarah and Connor making discoveries about magnetite, electricity and their effect on anomalies. Meanwhile Cutter who no longer seems to care that he's living in an alternate universe, has a terrible new hairstyle. A new military man named Becker (played by the yummy Ben Mansfield) shows up to replace the much missed Ryan.

Also there are hints about this season's mystery conspiracy plot, Abby has bad hair, Cutter finally wonders if mythological beasts are to do with dinos popping out of anomalies, Helen shows up with a clone army and there is a bizarre ending set in a ruined city.

This was an okish episode and I will keep watching mostly because the latest conspiracy mystery does intrigue.

This is a bizarre little sci-fi thriller.

For the build up it seems to be about numerology, Nic Cage showing off his 'acting', bad child actors and a useless weepy woman. Cage's character becomes obsessed with a sheet of paper covered in numbers that correctly predict disasters. Then he sees one of the predicted disasters come true, a terrifying plane crash. Shaken he tries to stop the remaining two disasters, but can't.

The ending is not what is expected. In some ways, it is slightly similar to an episode of 'The Outer Limits' called 'Music of the Spheres' and it all ends with some really unsubtle religious imagery.

This film was surprisingly dull, the plane crash, the subway and the final disaster were all the excitement provided. Still the highlight of this film was the fact the new version of the 'Star Trek' trailer was shown. It seems from he snippets shown that the film is taking pages from the Trek novels 'Final Frontier' and 'Enterprise: The First Adventure'.

This is an early offering from Wes Craven, the man who gave us the 'Scream' trilogy.

Martha and her husband Jim live in a remote rural area, right next door to the Hittites, a conservative, repressive religious sect. Jim used to belong to the sect but was expelled for marrying Martha. After Jim dies under mysterious circumstances, Martha's two friends Vicki and Lana (Sharon Stone) visit to help her out. Soon general unpleasantness befall the three women.

The Hittites come across as a community of ultra-religious mentalists who are dominated by their intimidating (and demented) leader Isaiah. Lana comments wryly: "The Hittites make the Amish look like swingers." The Hittites don't exactly endear themselves to their neighbours by ranting about serpents, Satan and the incubus all the time. The Hittites believe in and fear the incubus and see evidence of its work everywhere. So when Martha, Lana and Vicki wander around in their hot pants and fetching night attire, there is a culture clash. Then the deaths begin.

There's a stabbing, a mean dog attacks, Vicki wears neon yellow jogging shorts, Lana is menaced in a barn and Faith, the neighbours daughter keeps popping up all the place. Then Vicki falls for Jim's younger brother John. Soon John is being consumed by lust and throws away his chaste nice Hittite girl to make out with Vicki in a car. Isaiah (Ernest Borgnine) reacts badly to John losing his faith due to his manly urges and banishes him from the sect thundering: “You are a stench in the nostrils of God!”

Then there's an arson attack, Martha is menaced by a snake in her bathtub, Lana has a breakdown and Martha learns too late that the bitter killjoy sect are not the only twisted neighbours she has. All this take place to the tune of an Omenesque score. This is a good film, even is the ending is truly bizarre as something only hinted at becomes manifest. (2021 update: Maren Jensen who played Athena on the 1978 version of 'Battlestar Galactica' played Martha!)

Best Lines:
"They that dwell on the Earth shall wonder”.

"She goes on about death running after her wearing a black bathrobe or something." 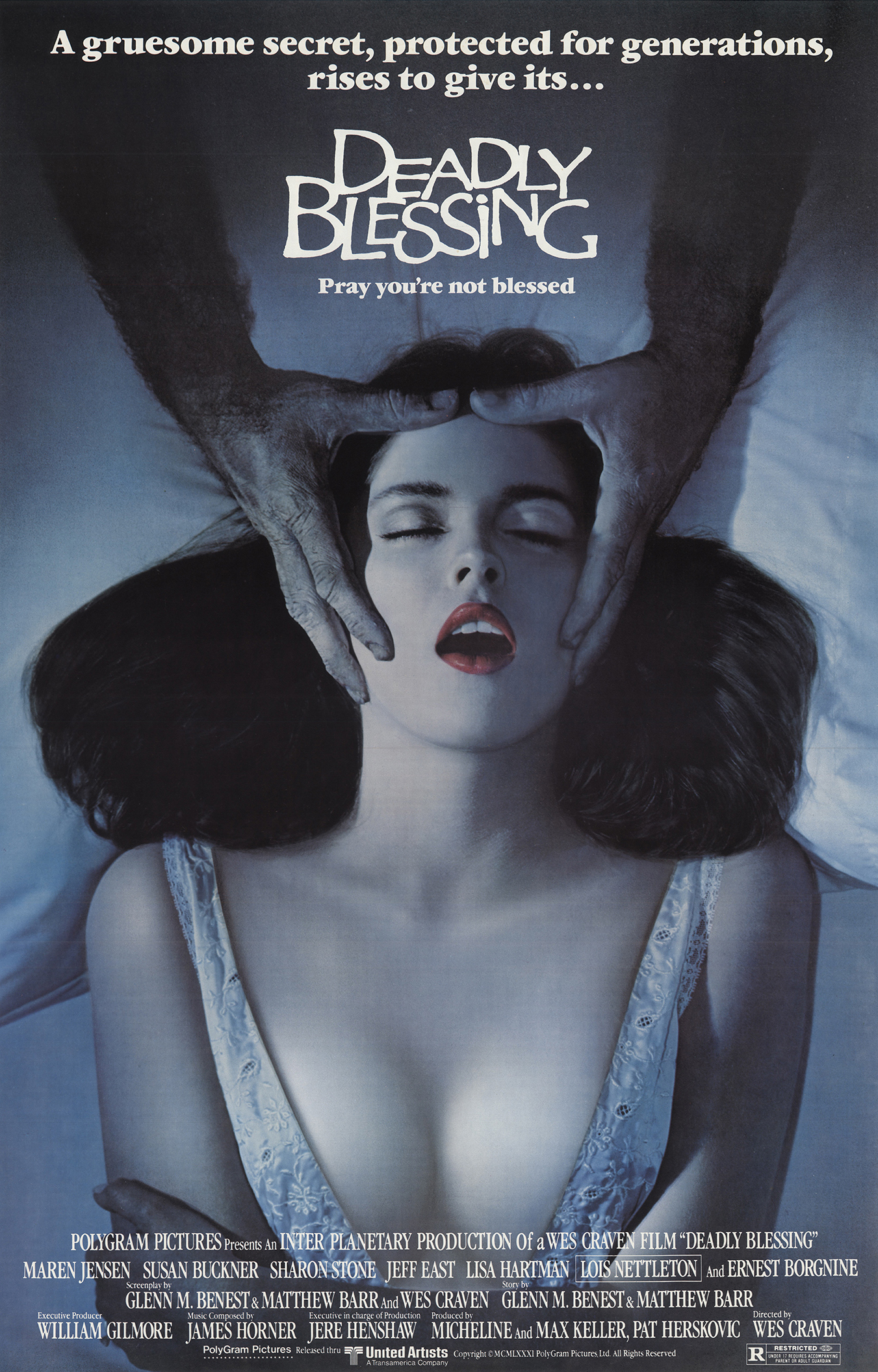 You can practically see TPTB's desperation leak through the screen as they do a big 'event' episode to try to prove to the viewer that the show isn't circling the drain creatively. Bennet and Angela are still smirking and plotting. Ando and Hiro act like morons as they stumble across Matt Parkman Jnr, the child Matt abandoned. Seems Matt Jnr is a human remote control. Hiro gets his powers back and idiot comedy ensues.

Tracy, Mohinder, Matt and Daphne escape from Building 26. It seems the sedating drugs wear off instantly. Tracy learns Micah is rebel. Daphne dies. Tracy does a massive freeze and Danko kills her. Peter and Angela hide out in the Statue of Liberty. This was okayish but the whole 'Fugitives' plot arc has been one great big non-event. Much like the whole 'Villains' plot arc was.

Best Lines:
"Angela. What did you do? Is it pills?"

"Why don't you just do it the old fashioned way and dig a ditch?"

He's Our You
Sayid is disturbed by young Ben. Young Ben just wants to get away from Dharma as he asks: "Did Richard send you?". Poor young Ben's desperation is obvious as he fondly reminisces: "Four years ago I ran away into the jungle and Richard found me." Sayid doesn't seem to make the connection between the Richard Ben talks about and the man he and Kate met back in 'There's No Place Like Home'. Have Ben and Richard had any more meetings since their first meeting? Why was Richard all raggedy at that meeting, yet when he met Horace he was all clean cut?

Sayid is interrogated, badly, by Horace: "Are you having some kind of problem with your people?" The Dharma people are not the fuzzy hippies they seemed to be, they're nasty nazi conformists. When Sayid confronts Sawyer with the fact that "A 12 year old Ben Linus brought me a chicken salad sandwich", Sawyer is blasé about the whole thing. He and probably Juliet, Miles, Jin and Daniel know who young Ben will become but are ignoring it. Sayid then meets Roger Linus who mocks him: "You hostiles supposed to be the kings of the jungle." Sayid witnesses Roger beating up his son.

Sawyer proves to be bad at leadership as he tasers Sayid in the balls, hauls him off for an LSD interrogation and then votes to kill Sayid. The Dharma lot are bloodthirsty and when a LSD tripping Sayid tells them the truth about himself and their fate, they don't believe him. Despite Dharma voting to kill Sayid, Sawyer calls them civilised in comparison to the Hostiles. Anyway young Ben breaks Sayid out of jail and weepingly tells Sayid: "I really hate it here" and begs to be taken to join the Hostiles. Sayid shoots young Ben in the chest. Sayid as no doubt just helped turn Ben into what he became and no doubt has set the purge in motion.

This was good. The Lostaways are no doubt creating the very history they learnt about. Young Ben refers to Richard as the leader of the Hostiles, again refuting Widmore's claim to have been the leader. Young Ben sees Richard and the Hostiles as saviours figuring they'll rescue him from his misery. Sayid calls Ben a monster and he's the one to shoot a child. The Dharma people are jerks. Sayid's bad luck with women continue as flashbacks show how he picked Illana up in a bar (the fact she didn't take offence to him thinking she was a hooker should have clued him in) and she kicked him in the head.

Questions remain: Why is no-one asking how Juliet did a c-section on Amy? Where are Annie and Olivia? Are Jack and Kate shacking up Why did Ben dress like Rorschach from 'Watchmen' in Moscow? Why is the chicken fat when alive and scrawny when dead? Does Horace have a boss?