DCI Jo Davidson and Operation Lighthouse are under investigation. Links between Gail Vella and AC-12's previous cases are found. I hate Kate. Jo is dodgy. There is vile behaviour and Hastings is up to something, again. Gail's reports on complicity were not broadcast. What about Hastings money woes and his estranged bitch wife? Gail was going to go into podcasting. What became of the podcast? Who is Chloe really? Fatso Steve finally gets promoted. Kate betrays Steve. Kate is such a twat. Ryan has joined Jo's unit. Kate doesn't know Ryan somehow having forgotten the psycho teen who hung out with an OCG who is now all grown up. Jo throws Steve and AC-12 out of her office due to Kate's crap. Hastings mutters angrily about Kate and Jo. Steve takes pain pills and bothers a widow. Who was Gail talking to? Wouldn't the vulnerable man recognise Ryan seeing as Ryan has bullied and harassed him all his life? Jo frames someone. WTF is going on?

“Some people you can't challenge.” 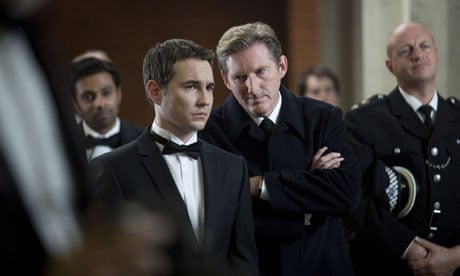 This has naff opening credits and mumbling bad acting. The phrase “Bent coopers” is uttered. There is 90s hair. There is faux hardboiled chat. People yell. I could care less. Ben Chaplin was in this throughly unsatisfactory mess of doom, gloom and misery.

Eddington is back, again, again. The Maquis are gone, killed by the Dominion. Talk about a non-event.