The debris from an alien ship crash lands on Earth. I'm interested.

My ex has silence and indifference. He shattered my regard in him. My ex has no coniviviality. He left me with unsettling ease. My ex has done significant damage. He crossed a moral boundary and has long forgotten me.

I'd try salted caramels with pine and chocolate truffles with actual truffles.

“Deserve a better space than what we've created for them.”

“Important before she died.”

“Amazing, beautiful things in my life.”

“What could have been, but didn't happen.”

“Have the best guidance.”

“Moments where you diverge in a relationship.”

“Squirted the paparazzi with urine from a water pistol.”

“Be accused of whingeing.”

“Goes from nought to shrill in a near nanosecond.”

“Troublesome upstart who speaks her mind.”

“Spiralling sense of panic...complaints silenced with a injection of pacifying drugs.”

“Showed what France and Britian could expect if they surrendered.”

“Under the influence of wicked boyfriends.”

“Immense wealth and its dubious origins.”

“Whom he considers dim.”

“Can't expect great behaivour from them.”

“Dealing with resentments toward others.”

“Stubbornness and rage were her superpowers.”

“Causal attiude to murder and violence.”

“Reflected little credit on him.”

“Nothing quite as bizarre as what is yet to come.”

“Moving into the realm of the ludicrous.”

“Such bullying was routinely ignored.”

“Resentment is a potent force.”

“Urgency of the case.”

“Things could have escalated.”

“No one would credibly engage in the process again.”

“Not been given a response or an update that could be called adequate.”

“No plans to recieve them.”

~
I am reading 'Blood And Money' – it's from 1976 and who is Radames? The author describes a photo of a child and says she saucily crossed her legs: WTF? I mean WTF was that? There is uncommented on casual racism, casual mention of slave owning, casual drink driving, casual homophobia, casual anti-semitism and yet this account of the sad death of Joan Robinson Hill is good.

“Her world was their shadow.”

“Liberal Democrats, to his thinking, were as dangerous as a snake in a swimming pool.”

“Not the eyes of a man content with his lot.”

“The creatures that had walked therein.”

“Reality was not her constant companion.”

“Of the old tradition where wealthy young women could bring their horses and keep them at a campus stable.”

“A mind tormented by memories.”

“Collected grievances against him.”

“Slammed his Stetson on his head,”

“This being illegal, even in Houston.” 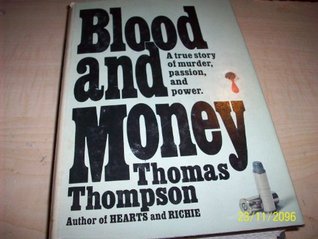