Ryan Reynolds thinks he is a movie star. Deadpool kills people and a cab driver wants to be a contract killer. People are purposefully awful. Deadpool's girlfriend dies. Deadpool does manipulation tools. Another X-Man shows up. There is an unfunny cameo. There is sap and bordeom and finally Cable (Josh Brolin) shows up.

An annoying kid is violent and annoying. People get sick of Deadpool. There is swearing and this was boring. This was completely pointless. This was not compelling. People mumble. X-Force show up briefly. Dominio has luck as a superpower.

There is violence and death. Wade should let the annoying terrorist kid die. Deadpool time travels. I did not like this. I am so over superhero films.

“I'll never not picture that.”

“No killing anyone. Ever.”

“A dated metaphor for racism in the 60s.”

“An annoying clown dressed up as a sextoy.”

“Which 'Sharknado' are we on?”

“You're not the revenge type.”

“Cried when they cancelled 'Felicity'.”

“So dark. Are you sure you're not from the DC universe?” 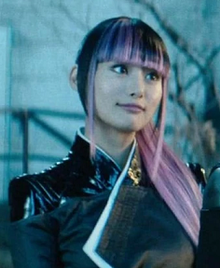