Monique sets Oren and Neveah up to be expelled. Bette gets bail. Shane's boyfriend is not nice and molests him in a toilet. Why is June helping Bette? Delia pushed Cassie. There is no moral worth and things are terribly wrong.

Shane isn't enjoying life as much as he'd expected to. There is no credibility. There is bad acting and saunas. Ramon shows off his tattoos and trashy actions. This was not eagerly anticipated. There is no focus or consistency. Shane punches Ramon. This was cringe worthy and incredibly crazy. Ramon is dubious. This does not resonate.

Cruz flip flops. Ramon is hostile. Bette's mom is spiteful. There is discontent, cruelty and farce. This was not wholesome. Nobody is concientious. There is toxic BS. There is no camaraderie. Delia's career is protected. One feels indifference.

There is vast carelessness. Oren tells Dev the toilet molester to be good to Shane. There is grossly irresponsible parenting. Bette is not the victim here. This was facile. Things are insidious. Cassie's awful. Things are angsty and fractious and there are tangible grave consequences. Things are absurd and grotesque.

Nabil and Delia mutter. Neveah ruins Oren's chances. People prattle irresponsibly. This was unnecessary. Ramon's smug. A terrifying future awaits. Ramon is June's father because he was once a ho hired by June's mother. This was not disconcerting. There are no stark lessons. This was odd. Why is there continuing reverence for Ramon? He's not well-liked. Ramon is scorned.

There are gloomy circumstances. This was not enthralling. This was vulgar. People have compromised reputations. Everyone has the least likeable character traits. People are vengeful. Various misfortunes befall people. There are gloomy cirumstances. June's fake accent grates. Is this a limited series or will there be a season 2?

There is intellectual evil. People are callous. A coup is staged with sadistic glee. Caleb turns his coat. How is Bette allowed into the school? Cassie's back. Things are increasingly feverish. Darkness and decay hold illimitable dominion over all. Are Oren and Neveah still expelled? Who stabbed Ramon? Is he dead? There is no eerie power. There is no revelry. This was not a spectacle or a heady danse macabre. Sic transit gloria mundi.

“No one wants to see that on stage.”

“Make you a lonely, lonely man.”

“Nobody takes down Monique.”

“Every dream dead on arrival.”

“Trade on my talents.”

“Old news before I ever started.”

“Carve out our revenge.”

“Security escorting you out.”

“Turned away love, joy, children! I do one thing: nothing else.”

“Vault the chosen one to success, then drive him into the wilderness.”

~
Leavin' On Your Mind

This weird west show is not good. There is mumbling and bitterness and fury and chaos. Wynonna's actions are marked by acrimony and her unreasonable stance. The grimmest things are done. The plot is increasingly unlikely. Wynonna is oddly complacent about death and murder.

Wynonna has an endless capacity to act like a psycho. One is losing patience. Wynonna engages in public reckless gun usage, openly carries a gun and does 'edgy' dressing – respectable society has no place for her. This show is an indignity. TPTB can't construct a narrative. Doc Holliday aka Wyatt Earp's BFF is trash. There is yelling and Dolls is a useless character.

Wynonna is a rubbish 'hero' and this is rubbish. Who is the blonde cop? This was not insightful. This was very disatisfactory. The dumb sister doesn't tell about Doc Holliday being a bad un.

“Time to unearth the past.”

Hickey is simmering with evil. Teeth can explode in air that cold. I dislike this show intensely. The ships water tanks are lead?!? Hickey stole a ring from a corpse. Crozier goes cold turkey after going Bligh. Lady Silence speaks and she's been there a month. There is reckless gun usage and this show is murky and small. A monster lurks. There are dark purposes and inevitability. Casting Jared Harris as a alcho seems tasteless. The poor monkey and the tinned food looks like puke. This was dull.

“Your kindess is unstoppable.”

“Rats trying to get in!”

“Denied protection of either ship!”

FitzJames is in command. It is 1848 and 2 weeks have passed since the previous ep. Coal, salt beef and flour and cheese are running out as is the lemon juice. The tins were bought from a low bidder. Also said cans are running out. The putrid tins have been tossed. FitzJames makes a bad decision. There are no beards and no cold breath. There is talk of a carnival. Lady Silence eats a dead seal. The doctor has a daughter. Why are there costumes and masks on board? FitzJames bleeds and the poor ship's monkey dies. Is nobody looking for the Inuit? The monster is so lame and fake looking.

Is FitzJames having a frost fair? People seem to be suffering from lead poisoning. Crozier comes out of his cabin. The Inuit woman cut her tongue out? The doctor troublemakes and Crozier wants to abandon both ships and walk out to Fort Resolution. And they want to ask the Inuit for help. How can snow burn? Hickey watches peril. They're doomed. There is fire, death and sun.

“The point of no return.”

“Does your gut hurt you?”

“Found themselves in hostile country.”

“You're not in a stable, take that outside.”

Weird videotapes bother people. People rant about the latest weirdo du jour. Archie wants to go to the naval academy and then he doesn't. Veronica lurks. Archie does 'music' and wants Betty. Veronica still calls her father daddy, is she 5? This was mundane. Wasn't her daddy in jail? He was dying but now he isn't. This was ill-conceived.

Veronica's daddy is lying and beating people up. Archie boxes. There is an unfolding crisis. Archie is a jerk. No one is disheartened or even shamed. Cheryl wants to be prom queen. Tensions stir and there are a series of least-worse choices. This was not frightening. People are vexed and irritable. People have grievances and there are diva turns, self serving tantrums and an over blown sense of deprivation and the reluctance to accept a world not totally under their control.

Feelings are made abundantly clear. There are adverse effects and Archie has to confess his cheating to Veronica at the prom. Cheryl wins prom queen. There is weirdness. Veronica and Archie break up. This was not captivating and Archie is taunted. One is baffled at how crap this was. Serious cosideration about this shows direction is needed. Things are clunkily contrived. This was awkward and stilted. Cheryl is alone. This was not sinister, vicious or funny.

Veronica's distressed. Archie could care less. Archie is stifiling and is a terrible friend to Jughead. Relationships are in need of reapir. There are no values. Trust has been lost. This was tricky and creaking and there is incredulity and disbelief. Archie is unhelpful and agitating division. Archie is sharp and angry.

There is growing disregard. Cheryl is imperious and strident. This provokes ire. There is an utter lack of understanding social concern. There is bitterness and division. There are no valiant deeds and Archie is not a kindly young man. There is no pinnacle of glory. There is a facade of love. This was less affable just endlessly awful

“Destined to be alone.”

“His name is warbaby.”

“Where do we get a snuff film?”

“Not according to Nicolas Cage movies.”

“Why does everyone of our dances turn into a Jamie Leigh Curtis movie?”

“I thought you picked me?” 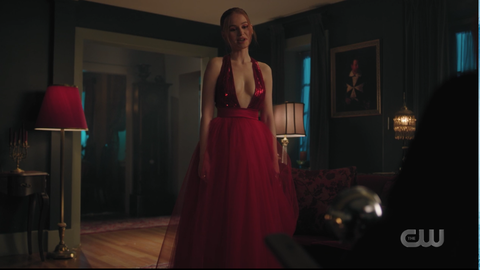