Killy is an interrogator. Doesn't killy have a ship to command? Mirror Connor was not in this. Mirror Detmer is part of the conspiracy. What became of mirror Lorca? Was his fate and the real Lorca's fate changed? The emperor tries to make mirror Michael change. Where did the fireflies come from? Mirror Burnham feigns compliance. What else happened during all this?

The emperor helps mirror Saru and shows off her gold dressing gown. There is no moral obligation. The emperor wants to remake the mirror universe, which is actually called that. Risa is seen. The emperor wears a furry cape. Mirror Airiam is seen. People have malevolent joy and the emperor gets a ludicrously overblown goodbye. This not was narratively inventive.

Women look like demented She-Ra dolls. Mirror Burnham slouches and the mirror doctor sneers. There is a bad fight scene and Carl is not a Q but the Guardian Of Forever. The 1st time that's been seen since the 1960s tv show. What became of Killy? The empeor now Georgiou is sent through the Guardian. Georgiou was in the mirror verse for 3 months and it was all real. Would that change the mirror universe and the fate of the Lorcas? The detached nacelles are seen. What is sending out the distress call?

Book lurks. Paul sulks. How could the Guardian move and have an avatar? Nobody knows of him/it? He/it hid during the Temporal Wars. Does this mean the 'Section 31' show is happening? Burham disgraces the memory of the real Gerorgiou. In 'TOS', the Guardian was over 10,000 centuries old, how old is it now? Who was Gerorgiou blathering about before she left? Burnham gives her the Vulcan hand gesture. Vance shows up. Why do people toast Gerorgiou? What about Lorca?

“Give me the honour I deserve!”

“You deserve many things.”

“Palace in the sky.”

“An empire left to rule.”

“She will not return?”

“Mirror and the prime universe were still aligned.”

“Some endings are inevitable.”

“Destined for her end as well.”

“This era is different.”

“Always be in rebellion.”

“Temporal wars happened. Everyone was killing everyone else.”

“Winds are a shifting.”

“I am The Guardian Of Forever.”

“What's a Guardian Of Forever?”

“You promised us new worlds to conquer.”

“She isn't getting any.”

“Still drawing oxygen on my ship.”

“Even the darkest night will end.”

“Execute the traitors with my own hands.”

“Craving ganglia in my cell.”

“Lorca was always an under-achiever.”

“Won't give up Lorca easily.”

“Judge between loyalty and flattery.”

“You are not Terran.”

“Make it what it needs to be.”

“As if he had another choice.”

“Not as much as they despise you.”

“No spoils from peace.”

People are aggrieved and try to ascertain who pushed Cassie. It proves impossible to care. Yet this is an oddly addictive spectacle. Nabil stirs suspicion. Bette plots. Oren and Shane's relationship turns toxic. Neveah sneaks. People are either naked or in their underwear. Ramon creeps and June sulks and does her silly fake accent and faces public school.

Nabil screams and acts like a crazy loon. June's mother is done with her medicore ass. Bette's foot is messed up. There is bad acting and Neveah is nearly pushed under a bus. There is no emotional complexity. This was a seriously average grim affair. The acting is horrifically bad. Caleb whines and nobody acts reasonable or rational. This was not a complete failure.

There is inevitable damage. Lauren Holly wears an interesting dress. Bette makes a scene and pukes off a bridge. Nabil makes a scene and is arrested. The dance teacher is so awful and selfish. He and the massage guy look like twins, which is creepy considering their relationship.

Oren punches Shane in the face and threatens more violence. Shane cries shirtless and in his udnerwear and does a sad dance on the roof, okay then. Shane's trailer trash. One feels apathy and one's assessment of this is damning. People work out and fight shirtless. This was inadequate. June is a bimbo who is onerous. This lacks clarity and insight.

There is no moral crisis. Oren does incitment. Interest in this is sporadic. Shane's affection is regarded by Oren as a provocation. Nobody in authority seems in a hurry to uncover the truth of what happened to Cassie. One is irked by the irritant June and her constant complaining.

Nabil kisses Neveah, okay then. Bette flaunts a certain shamelessness and has venal complicity. There are situations with no easy resolution. Bette is endlessly deceptive and has no essence of decency. One doesn't care about Oren and his bitter tirades.

“Don't kill yourself trying to keep it.”

“You had the price being being paid.”

“The least they can do is worship.”

“Arrested him without warrent, attorney or probable cause.”

“I don't seem normal to people.”

“The world doesn't get your genius.”

“You should get dressed for the gala.”

“I am dressed for the gala.”

“To exist in the shadow of something greater.”

“Get your ass out of that house.”

“Save it for Giselle's mad scene.”

~
In Case Of Emergency

This got a 2nd season somehow. A flight attendant shags a passenger and wakes up to find him dead. There is a gross Amanda Knox joke. She has the dead man's ghost as a spirit guide. Yawn.

“Public nudity, yelling in the subway kind of drunk.”

“It's his job to stare at things.” 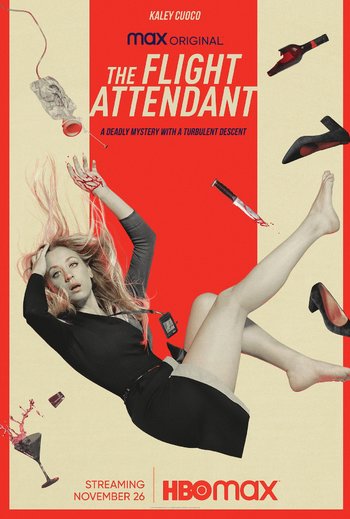 AI's whine about organics. Piss off Soji. I've no idea what is going on or why. Brent Spiner has been shoved into this show. The abusive Romulan boyfriend shouts in a vest. The AI's signal something to come. People fear AI's will destroy all organic life. I accidently skipped a few eps. Picard is in full old man yells at clouds mode. Seven's back and fights the Romulan bitch. The Romulan bitch does fancy flips during her catfight with Seven. The Romulan bitch is kicked down a bottomless pit and you can hear her screams echoing for a good while. Oh ick. Riker shows up to save the day. The acting is appalling. Picard is profoundly wrong about the evil bitch Soji. Picard dies of his brain disease of the brain. Neither Picard or Data will stay dead. FFS. This was a turd, a turd of an ep and a show.

“Fear is an incompetent teacher.”