It's the mirror universe, again. The Terrans are opressors who have fear and they mould slaves into something that's going to work for them. The Emperor has changed being in the Prime verse whilst the mirror Lorca never could. The creepy old guy lurks and dark memories and untold truths surface. There is a mention of the JJ Abrams verse. This was not startling original. It is utterly compelling. The Prime and mirror universe are drifting apart, what the MU looks like now we don't learn, but we see it as it was when she was Emperor.

The Emperor crossed time and dimensions but still finds time to be rude to Tilly and have boastful arrogance. Discovery violates 2 Accords in this ep or rather the Emperor does. Why are people trying to save the murderous genocidal Emperor? There is a crisis motif. The Emperor is conquest-oriented and a serious evil.

People do purely pessimistic analysis of the Emperor's nature. Things are volatile, complex and uncertain. How many specices did the Emperor partake in the eradication of? Why are they saving her? She's into bullying and intimidation and conniving. The Terran Empire doesn't do democracy. There is an atmosphere of intimidation and constant fear there. 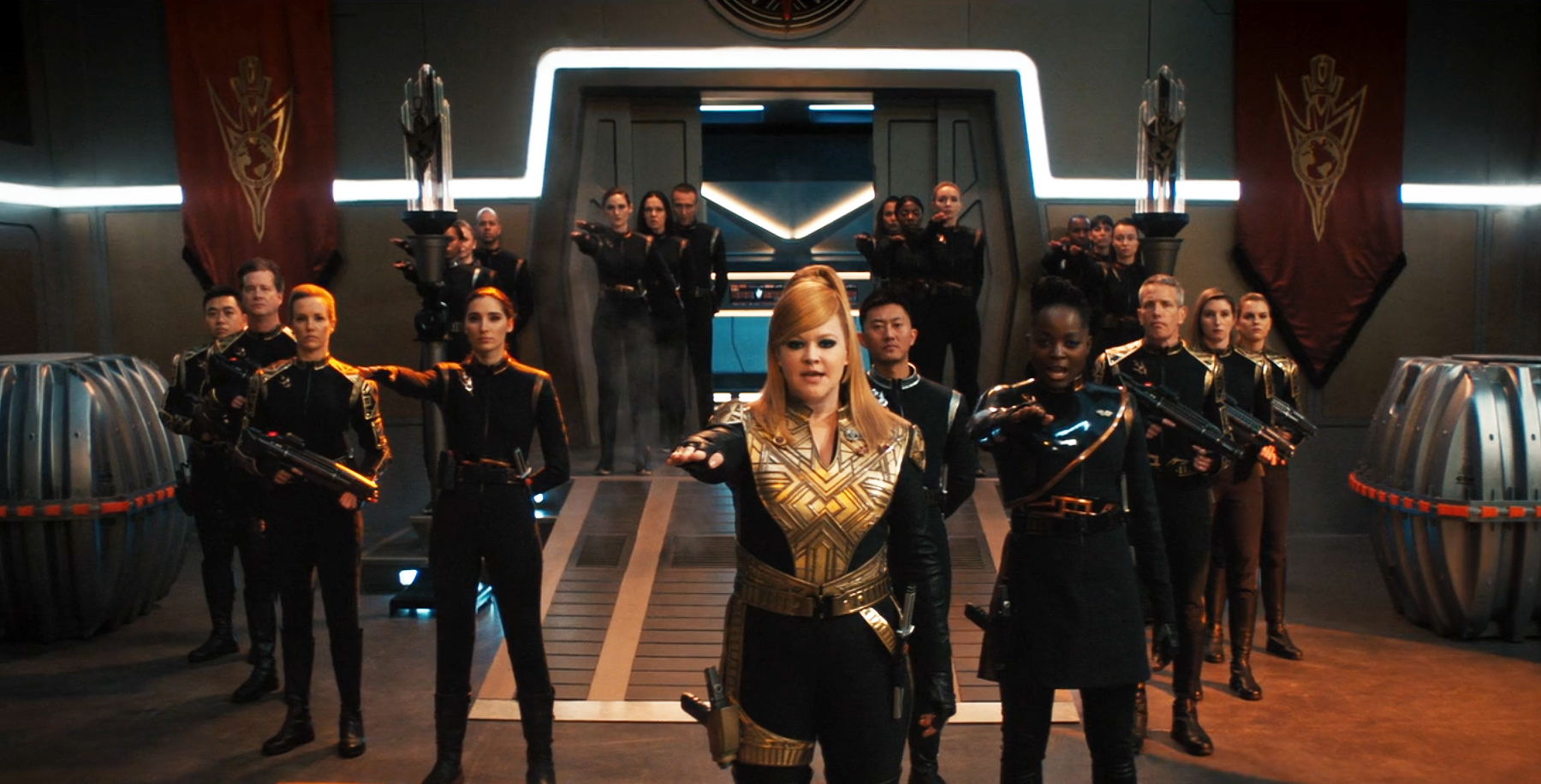 Terrans live in constant fear and one is well aware of what they do best: violence. The Terrans are their slaves gods and their culture demands utter subservience from slaves. Why are they fawning over her? Why does Tilly HUG her? There is an alien sky. Adira and Paul bumble. The Terran Empire is a way of built around slavery and appropriating other's stuff.

If a Terran orders a slave to do anything, they have to accept. Book is on board. Did the man who allowed the Emperor to travel across dimensions and time back to her glory days in the mu a Q? Is a slave doesn't follow orders, Terrans kill them. So slaves have to follow orders. Saru learns another of his species made the message Adira decoded. It's over a 100 years old. What's a dilithium nursery? Paul goes on about opening a backdoor.

The Emerald Chain are Kazon level lame. The Emperor now in her mu glory, unites with Captain Killy and her Ivana Trump hair. Killy goes on about an imperial shipyard and Earth defence systems and Lorca. Killy has a lot of blue eyeshadow on. Where's the real Lorca? The Emperor wants to change her destiny. The Terrans have flashy uniforms and mirror Paul plots. 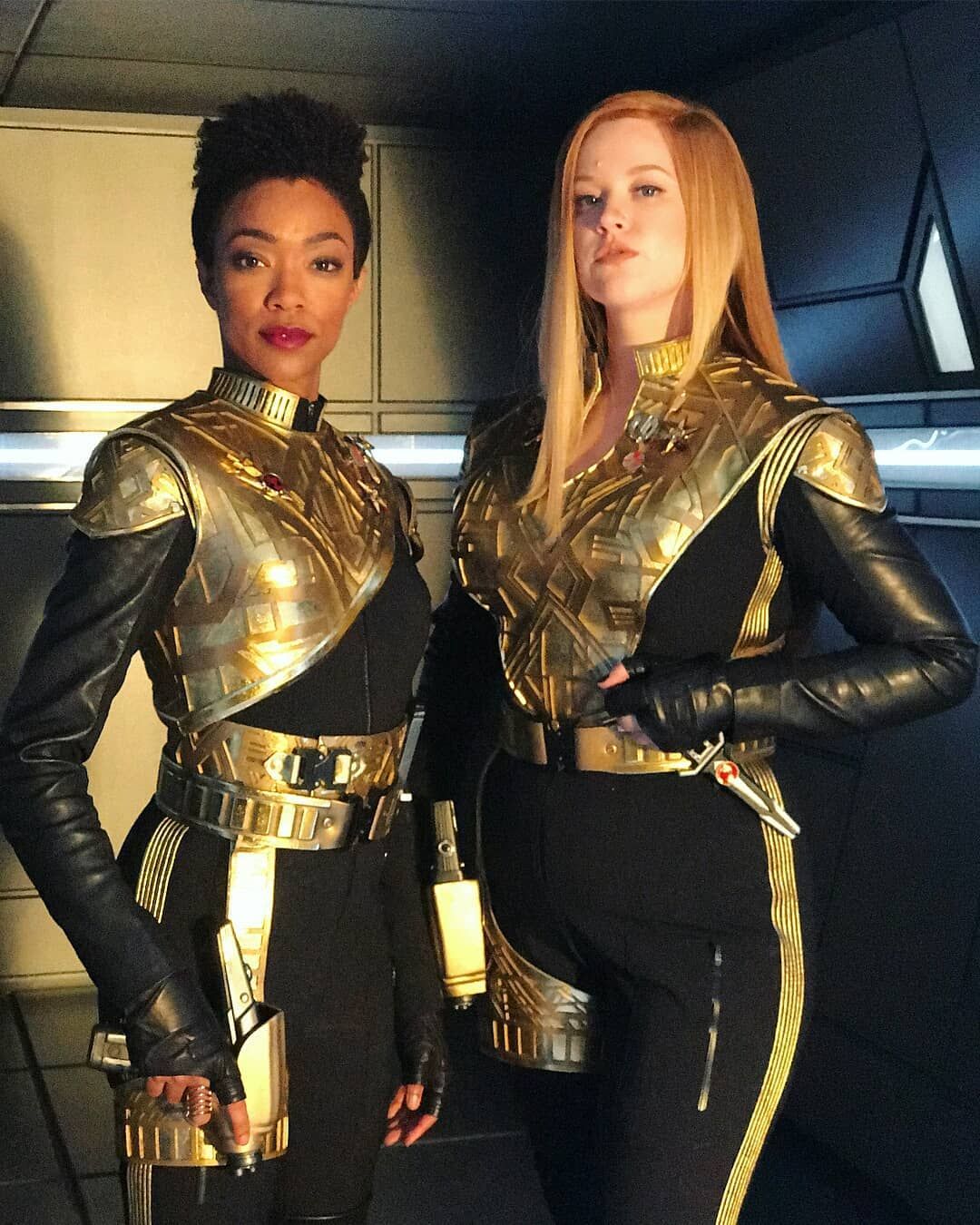 There are elaborate bows and salutes. Mu Burhman and her dark lipstick overacts. There are weird wrist clasps. This was not sublime. The mu doctor has a red uniform. Landy is seen. Where is mirror Connor? Mu Burnham is a psycho and mu Sarus brushes the Emperor's hair. The Emperor and her massive headpiece recruits Saru.

There is a knife fight in the corridor that features fancy kicking and punching. The mu has interpretive dance. The Charon is seen again. Mu Paul had a knife but the Emperor put one in his throat first. The mu doctor doesn't react at all. Mu Burham is excited by violence. This was good. Mu Burnham ends up in an agoniser. David Cronenberg and Paul Guilfoyle and Rekha Sharma guest starred.

“Many horrible things we discovered.”

“Our future is unwritten.”

“She fights for loyalty...loyalty always wins.”

“Slayer of Klingons, daughter of Rome.”

“Everything we will yet become.”

“You need to find better assassins.”

“My power is absolute.”

“Plucked me out of a trash heap?”

“Master of that trash heap.”

“Waste of evolution. We should kill them all.”

“Aiming well above his station.”

“You dare speak to an offier of the Empire?!?”

“The cull is your gift to us.”

“No need to coarsen your tongue.”

“Even I cannot enter.”

“What are Michael and Lorca whispering in the dark?”

“He who sheds the most blood; makes the laws.”

“Traveled across time and dimensions.”

“A dying Terrans instinct is to find a way to die in battle.”

“Menace to any civilization she runs across.”

“Odds are not good here.”

“Made a lot of bad calls in his day.”

“Your help is useless.”

“A Terran greets death every morning!”

“Whatever's waiting for you on that planet.”

“Plucked you off a rubbish heap.”

“Never had to parse words with you.”

“Did you do a diagnostic?”

“Enjoying my life so much more without him.”

“You stayed on the heap.”

“Not my work you're seeing here.”

“Other ways to die.”

“Reports of discontent in the outer systems.”

“You know how slaves are.”

“Try to take my throne and my life.”

“Risk losing the trust of your loyalists.”

“Mother of the Fatherland.”

“My cares are simple.”

“Warriors of the Empire.”

“Know when to shut the hell up.”

“Call you Killy after all.” 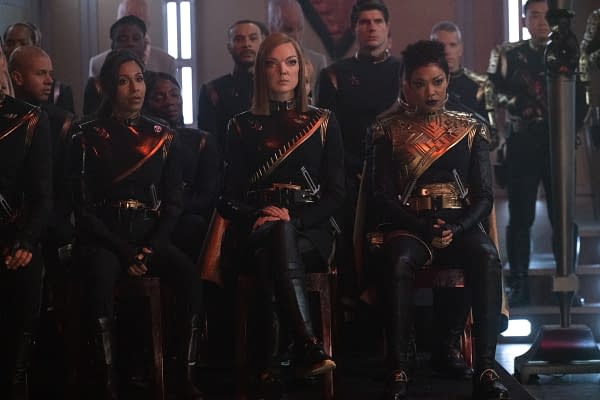 This show is entirely joyless. Dean wants to go to the craphole Atlantic City. Steve Bacic guest stars. This show is futility and who is Amara? There is a risk of imminent harm, allegedly. Jack and Castiel go on a road trip. Castiel has aged badly. Things are not fraught with peril or potential for devastation. There are no disconcerting feelings. There is ineptitude and laziness by TPTB. A demon who talks funny bores. He makes a 'Highway To Heaven' joke. That is dated.

There are mysterious murders. There is no human excellence. People are fractious and have categorically wrong contact with evil, which is shrugged off. This grows increasingly deranged. Dean and Sam cultivate anticipation of an apocalypstic event that promises a final resolution to their white male alienation. This was not gloriously absurd. This induces derison and it is not deeply affecting.

Castiel and Jack are derailing forces. There is desperation and this was a terrible calamity. There is no claustrophobia and panic. Castiel used to be badass and now he is all melancholy. There is no face of adversity. Dean has characteristically mournful regret and striking unsentimentality. Dean has resigned gloom and no moral spine. There is another inevitable crisis.

There is no capacity for happiness. Dean whines anbout his dead again mother. TPTB acknowledge that Mary was a bad mother and a terrible person. This was not horribly prophetic and Dean tries for scorching intensity and anguish and wrenching sadness. People are spectacularly untruthful. Dean became terribly aware that his mother never cared about him. There is deception and manipulation. This was tedious.

There is sexism and no fear, despair, grief or confusion. This lacks a plot or a moral. This was not competent or well-functioning. There is misery. There is no civility. Nothing exceeds possiility.

“Seen too many bad slasher flicks.”

“Doing nothing to stop it.”

“Lot of baggage with that word.”

“A saint is a sinner who keeps trying.”

“Didn't know what my purpose was anymore.”

“Now is always better than then.”

Guy Burnet stars in this scifi drama. People are linked by tech and there may be something wrong with the tech. This was badly acted and dull. There are talk of resisters and the resistance.