A stag is wounded by a bad shot hunter and wanders in pain until Philip shoots it dead as a metaphor. Poor stag. There are corgis and the queen wears a tartan skirt that makes her look like a pensioner. Why won't she wear a bra? The royals love hunting with a ferocious passion.

Charles and Diana are chaperoned on a date. Diana wears an ugly green dress. Diana's grandmother lurks. The royals rigidly adhere to protocol. Charles has a bountiful social life and familiar miseries. This show is a damning indictment of the Windsors. Charles would grow to resent the dominant position of Diana. Their eventual mutual hatred would intensify to a level where it was uncontrollable.

Diana at first had a fatal delusion about Charles – he was not a prince charming he was a prince charmless with no compassion and a perennial obsession with himself and Camilla. Thatcher deals with the grim reality of the 70s. There's a less than stellar public response to Thatcher. Charles deserves to be the subject of ridicule. The Windsors do secret class based tests of their guests.

The royals love being all wet and muddy. The Thatchers are sneered at. Philip is ghastly and the royals are of no value to humanity, they are nothing. They are piped in to dinner. There is no gandeur whatsoever. What ghastly, boring, mind numbing people the royals are.

TPTB are not afraid to go to some dark places. Margaret whines. There are no social opportunities. Philip thinks Thatcher doesn't know fun – he and the queen don't share a bedroom. Thatcher has no time for the idle rich. Camilla lurks. She and Charles are poisonous and selfish and grasping.

The Queen Mother gurns and the Highland Games are held. Thatcher is sick of the royal clique and the royals play at Highland dress. Diana visits and charms. She goes stalking with Philip. Diana shares a massive flat with 3 friends. There is enforced idlessness at Balmoral. Philip summons Charles for a talk. The family position is that Charles needs to wed. Charles hates his kin. The queen is toothy and rude to Thatcher.

As for Thatcher, she has a new cabinet and entitlement is called out. Charles' duty is to wait for his mother to die so he can have her job. Camila lurks. People intentionally limited Diana's choices. This was not good.

“Never cross that line. Ever.”

“Granny's the most hideous snob.”

“No one sits in that chair.”

“Begging for pardon is common.”

“Doubtless be in a state again.”

“What you wear and when.”

“Those who sleep apart, grow apart.”

“Work was our play.”

“Small is the work that you have done.”

“Half Scottish, half Germanic cuckoo land!”

“Struggling to find any redeeming features in these people at all.”

“How much is potentially at stake for our family.”

Diana is made to leave her flat and go live in Buckingam palace for princess training and she develops an eating disorder. There is an eating disorder warning on this ep. It is 1981 and there are hideous 80s clothes and cars. Charles looks constipated. The queen has lots of pictures of ponies. A mouse walks across the floor unnoticed. The Windsors are awful, foul people. Charles proposed.

Charles is up himself and Diana dresses like a kids tv host. The news media lurks. Her friends fade away. What became of them? Charles is an awful wimp with a haircut from the 1950s. Diana had to pick out her own ring. Charles should have eternal shame for now he acted. The famous ring is seen. Diana has cultural power.

Diana had to say goodbye to Earls Court and her friends. There is no empirical truth in this. Things build the public response to Diana. The palace is cold and impersonal and has a learned language. The royals are racist about Imelda Marcos. Margaret is a ghastly lady drunk. Diana has to curtsey to her in laws. Charles sees the marraige as transactional. The royals have vicious tribalism and meaningless jargon and sophistry. There are no aw-inspiring images. People lie.

Diana and Charles do their infamous pre wedding interview. Nobody asks why a 35 year old man is marrying a 19 year old. Charles leaves Diana to go abroad. Yokels on the streets yap. Charles tells Diana to get in contact with Camilla. Diana gets a cart of post: fan mail. She roller skates. The consistent narrative is that Charles is fractious and unassilable. The royals are a hostile environment.

The family ignore Diana's obvious distress. There is a spiral staircase. Diana binges and purges. There are really loud vomiting noises. Nobody noticed? Diana watches 'Bagpuss'. Why isn't anyone helping her? She's taught to give speeches without moving her arms by being tied up. Why didn't anyone get rid of Camilla? She is a floozy, slut, trollop and where are Fergie and Kanga? There are no matters of urgency. Camilla flaunts her knowledge of Charles to Diana.

This was harmless consence. Charles has a braclet made for Camilla that features their nicknames for each other. Charles and his lackeys are ghastly. There are flowers everywhere. Camilla smokes and Charles sees her, his mistress, before his wife to be. Charles lies. Philip, Margaret and the queen are all dumb. The queen mother barely speaks. Margaret of all people advises caution.

Charles broods and why does he call his mother; mummy? The queen is no help. Things go nuclear. Anne wears a puke coloured dress to the wedding. There are crowds and guests and ugly clothes. Diana's unsteamed wedding dress is briefly seen. How did she pee in that thing? Charles looks constipated.

“Suprised by the question.”

“Pages of the backstairs.”

“Cannot be allowed to fail.”

“Horrors we saw the other night.”

“Deep and lasting joy to the nation.”

“Whatever in love means.”

“Fussy and set in his ways.”

“Dull and shy, no attraction.”

“Pay the consequences each time.”

“Still in love with the other one.”

“Wretchedness you are feeling now.”

Koo Stark is mentioned. There is a really icky take on their relationship. Thatcher's idiot son Mark gets lost during a car race. Mark is her obvious favourite. It is 1982 and the Falklands War kicks off. Mark Thatcher is an obvious wideboy. The queen has to make arrangements to see her children. Argentina causes issues. Edward whines and is head boy at his school and goes on about being Eddie Windsor and being bullied. What do the royals actually do? Mark distracted Thatcher during the Falklands. Thatcher rants. Anne's jealous of Diana and has an affair.

The royals are hereditary grumps as the real history of Britian happens somewhere else. Charles might as well cackle malvolently. Camilla is a scary hick. There is snotty snobbery. Andrew shows up to be gross and sleazy. There is societal inertia. This was supurious. Carol Thatcher looks like a mouse and her mother ignores her and mocks her. Charles screams at his pregnant wife who is hiding in her room from him.

The queen doesn't visit her pregnant daughter in law. Charles calls Diana incurious and obsesses over Camilla and his garden. Charles chose his house to be near Camilla. The queen is sick of Charles and his selfishness. There is vintage news footage and this was medicore and the taskforce sails.

“Used to enjoy my reputation as the difficult one.”

“One thing that makes me happy.”

“I thought you didn't listen to talk.”

“Rain and mud and horses and dogs.”

“Charming her. Awful me.”

“Even went to the trouble of chilling it.”

“Some upside to being what we are.”

“Trust all will be well?”

“Doing nothing your solution for everything?”

“Lack of urgency from everyone.”

The filthy fingers of blackamil spread across lusty London. The pimps have no shame. Margaret flits between 2 husbands. Lydia plots. Lucy is thick and useless. There is no deranged energy. Lydia resumes persecuting as she is the villain of the piece and she is fractious. Lydia gives free reign to her nastier impulses of cruelty and insolence. Margaret is stupid and problematic, ethically speaking. The pimps have murderous wickedness. Lucy feels no grief or disruption over her dead sister. How elaborately people plot against others.

People are incapable of quiet restraint. Lydia is an unflinching adversary. There are no moral or ethical decisions. Jonas appeals to Margaret and walks out. Margaret is typically thick. Blayne coos over his baby son. Lydia isn't shocked when Blayne kicks out his babymamma. Isabella worries about her thick daughter. Emily learns the pimps are scum. Emily's billy no mates, again. Nancy bores and leaves but then doesn't. Kate lies. A bawd's husband shows up to yell.

Kate bangs Prince Henry (who?). People take adversarial positions. Isabella seeks to gain a pardon for Margaret. There is unpleasant reality. This was woefully inadequate. Margaret is ungrateful. This was sheer boredom that was underlit. A pimp gets his.

“We don't want your custom!”

“Losing you to the past.”

“Denounce you to the law!”

“You're not welcome here!”

“Gave the Grim Reaper one for free and he let me off.”

“Mysterious perishing of your landlady.”

“Drag him to the law myself.”

“Who is always left behind?”

“Soar above the likes of you.”

“Meet a killer, down on the Thames, alone, on the promise of money?!?”

A miniseries based on an infamous murder, the murder was so infamous it spawned 2 rival books and two rival miniseries'. I saw the other miniseries 'Nutcracker' with Lee Remick. I never saw this miniseries until now. A rich woman demands money, harasses her family, abuses her 3 children and engages in theft and murder plotting while suffering from obvious and untreated mental illness.

There is family drama and the rich miser angry grandfather is shot. The money mad mother rants about connivance and money and abuses her children. The grandmother is useless. The daughter's sons overact wildly. People obsess over a will. This happened in Salt Lake City Utah in 1979. The daughter throws her sons under the bus.

Jasmine Guy, Chris Noth, Terry O'Quinn, Jenna Van Oy and Stefanie Powers feature. One son cracks up. The mother cries and manipulates her way out of things. A morally tainted family in a seething standoff. One son ends up in a nutward. This was okay, the Lee Remick miniseries got more attention. The daughter would go on bizarre rants and was obviously mentally ill. An ex and the daughter plot.

“Her depression comes and goes with your cheques.”

“Let me get your pills.”

"Just carfare for your crowd!"

"Money disappears in her presence like a snowflake on a hot stove!"

"Attacked his roommate with a hammer!" 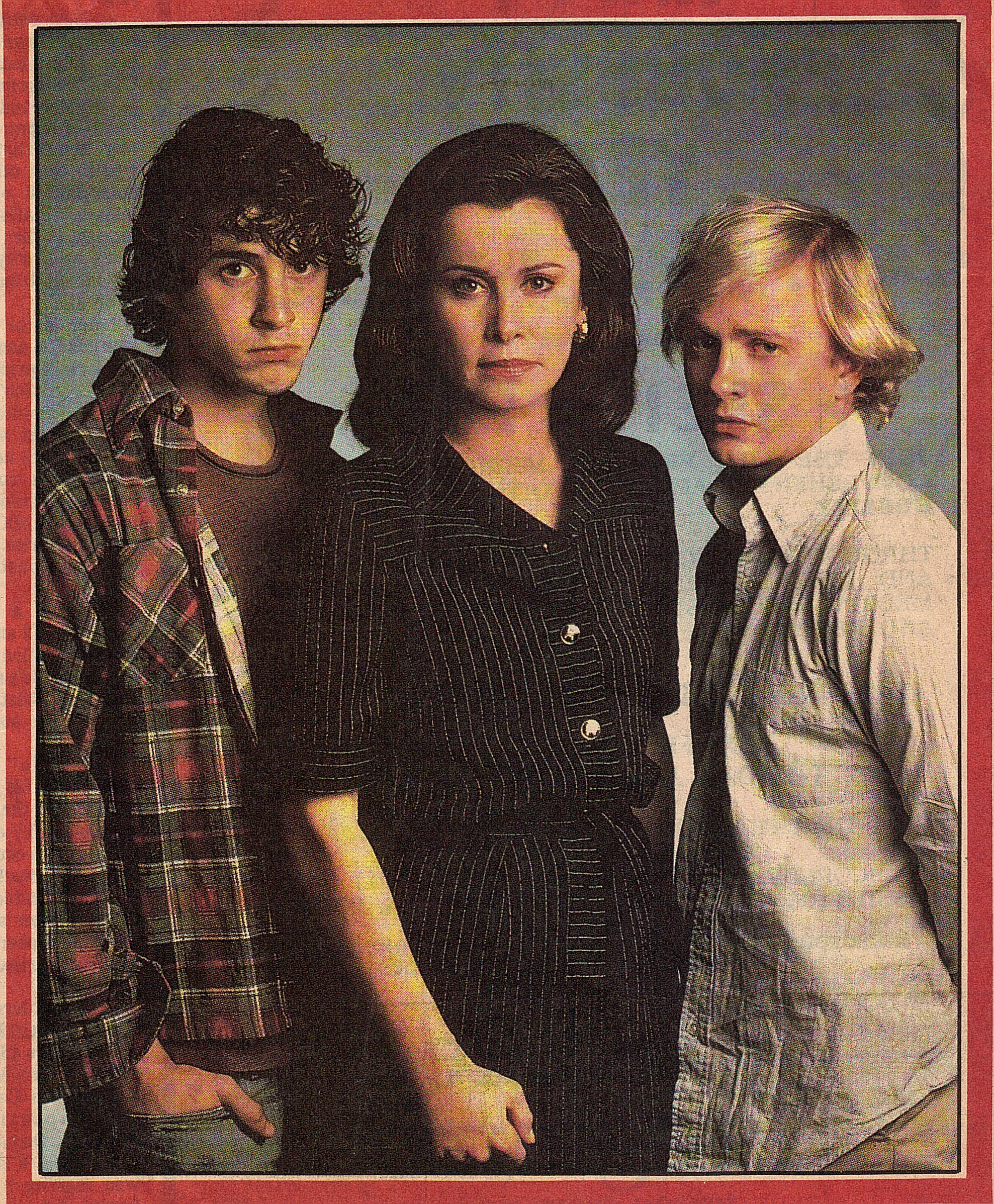