This is a Flemish tv show from Belgium. Former school principle Frie Palmers is on trial on Ghent for murdering her best friend and her own daughter. This was subtitled and the opening credits were dull. People are accusatory of Frie who is accused of abject cruelty. Frie is not penitential. Did she do it or not? It's 2018 and there is a crowded courtroom for jury selection. People have grand articulations. Are the accusations against her unfounded? A woman does not want to be on the jury, of course she is selected as an alternate.

There is arse thrusting, a mole, a cat, t&a and a jury member who has changed her name. Is the cat okay? Frie had a spectacular fall from grace. There are videotapes. Did someone else kill the best friend? There is lingering trauma and the dead best friend was the daughter of an enviromental activist. There are righteous proclimations.

Juror number 1 (the name changer) is young and doubted. The judge questions Frie. What sort of childhood did Frie have? Her ex's side ho turned wife is Margot. There are flashbacks and Frie claims her ex gave her HPV. The jury eat in a public bar. Margot worked for Frie. How did Frie's daughter, Roos, get attacked with a piece of glass?

There is talk of a custody battle that Frie lost. Frie blames Margot and her mean looking mother for Roos' death. Frie is transported in what looks like the popemobile. Margot and her awful mother bitch. The ex lies. Will Frie be exonerated from any responsibility? Does the ill used mother know Frie? This was not warm. This was dated. The jury are shown on the news!?! The ill used wife is locked in a bathroom by her hubby. How can he lock her in from the outside? Who is the foreperson to Frie? When Roos was attacked, a vile policewoman wouldn't let her see Roos, blamed her and attacked her. This was medicore.

“What the media have made you into.”

“Take your place, it's your duty.”

“That bitch from child servcies.”

The disgraced ex MP Stella offers to help Jolene. As for Jolene she's back to using her real name Hayley and is working in a cafe. Amy is still living with her. Hayley is facing the gig economy and Hayley is a rude idiot with no money. There is a rabbit in Hayley's house. Amy and Tom make bad choices. The greater negative affect goes on. Hayley is awful. People are emotionally manipulative. This was incredibly tough viewing.

There are terrible impacts and this cannot end up in a good place. Things are actively damaging. The industry is violently insular. Hayley is perennially dissatisfied and she ignores her younger daughter who is posing on the internet. There is growing despair.

Hayley has a meltdown and 10 years ago Hayley was in LA and had an encounter with Tom Pain. Carroll knew about Tom Pain and Carroll is scum. Hayley has a UTI and Carroll has HIV and Amy goes to the Shaftas. There is sleaze and Hayley has a serious liver condition.

There is very serious acting. Personal freedom is a thing. Pleasure has a price everyone else is forced to pay. Hayley is in a state of desperation. People dictate how Hayley should live her life. People wait for others to show affection. Carroll causes mischief. Hayley has irrefutable proof. There is no huge adulation for this.

Hayley ignores her younger daughter. Her son lives with Rich who has a new woman. Her son doesn't want to see her. Hayley vomits in a school playground. Tom Pain is 42 and dumps Amy. Hayley is deluded. What became of Stella's husband? There is cultural critique. Hayley was groomed from age 12. Amy has parents? Wasn't she in care? Carroll writes his memoir called 'Come Again'. Amy lies and Hayley tantrums.

“3rd largest company on the internet.”

“You have money now.”

“That's what normal happy people do at work.”

“Bend over the chair.”

“I wonder how much he's going to hurt me if I try to get him off me.”

“How close the nearest house is and how quickly I can run there.”

“Just because you don't see it don't mean it ain't happening.”

“Only associate with respectable people.”

“We are whatever our users need us to be.”

“This is boring now.”

“Group of lads who used to hang out in the stairwell.”

“I see you now. I see exactly what you are.”

There are disturbing findings and stupid evil children who have stupid plummy fake accents. There is a flashback to Quint and his ghastly mother. His mother was in a mental hospital and she ignored his abusive father. Why does Peter Quint's father want to kill him? Why didn't he throw her out and ignore her blackmail? Peter Quint has a juvie record and his mother is taunting, evil and uncaring. No wonder he turned out bad. A plummy cop bothers Rebecca. Peter was blackmailed into stealing from Henry. Where did the money go?!?

This was not vitally important. What were TPTB's inital intentions? This show was vehemently resistant to logic. Logic was not paid much attention. This was not much loved. There is no wicked bump in the night going on. This was really, really bad and garbage.

Quint has insatiable lust as a ghost. Bly has a deeply hierarchical social fabric. Rebecca accepted ghosts easily and was an idiot. She did not notice her precarious situation. Henry was a jerk. There are gurning lumpen proles. Quint was and is an unrepentant jerk with lies, foibles and offensive antics. He murdered Rebecca and she took the blame for his behaviour. Quint is decaying in the lake.

Did no one find his body? There are gagges and where else would Quint go but hell? Miles is psycho. There is avoidance of doubt. If you die at Bly, you're cursed. Dani is useless. Flora and Miles are morons. There should be serious and growing concern over their IQ. How can the housekeeper touch things and Peter can't? There is bad acting and Miles and Flora need a smack. Nobody has smelled what's in the well? Miles and Flora are absolutely crazy.

There is terrible decision making and a rapid deterioration. There is a grave situation. Flora shrieks cos she's a stupid bitch. This show even had a 'Garth Marenghi's Darkplace' alum playing Henry's brother!

“I'm much more than just upset.”

“Not everything has a half life.”

“Spent too much of his life alone.”

“Not what I agreed.”

“Again we have to do this?”

“This was worse than that.”

“Tucked away in the forever house.”

The Romance Of Certain Old Clothes

This black and white flashback ep explains the bitter memories that fuels the curse on Bly. Dani's in peril and Flora needs a good kicing as does Miles but first we get the black and white tale of how 2 17th century sisters created the curse.

This was good, why couldn't this have been the season? 2 orphaned sisters Viola and Perdita loved the same man. He married Viola and had a daughter, she got TB and didn't die until Perdita killed her and married the man. Plague doctors show up. Viola's daughter is useless. The sick Viola hung on for years and her terrible will let her hang on after death. Perdita and Viola have crimped hair and no servants. Why did the sisters share a bed? Why did the father and daughter share a bed? Viola and Perdita were loving until they fell out leading to murder and jealously.

Viola killed Perdita and haunted a trunk which ended up in the lake. The trunk had Viola's ghost, jewels and fine gowns in it. Nobody ever found the trunk or jewels? Did nobody ever clean the lake? There was absolute abandonment. Viola murdered many people as a ghost. Ghosts lost their selves over time at Bly.

“No present. No future.”

“Less of a great lady than her sister had been.”

“The pull of that next world.”

“So many years later.”

“Some amount of love to it after all.”

“Change does not often announce itself.”

“God help you but you will.”

“How dire you have made things!”

“Now forgotten in the attic.”

“Stepped into the path of her own fate.”

The Beast In The Jungle

So ends this inspid show which is full of people making really stupid decisions. There is a resolution of the conflict though Flora and Miles have no appreciation or thanks for Dani who saved their wretched lives. She should have let the brats die.

This was uninspired and stupid and Flora and Miles are completely stupid brats who should have been left to die. Flora is a bad nasty child. Miles is a fundamental failure as a human being. Recall the poor dove? Henry shows up. Flora screams some more. Will someone shut the brat up?

It is a difficult scenario. Ghosts are callous and it is unconscionable that Miles got away with murdering someone. People are denied dignity. Things are chaotic. Henry lives. There is arbitariness and this was desperately disappointing. Dani is cursed. This was crude. Miles and Flora have no accountability for their contribution to the horror. There is contempt and cynicism and is Quint still rotting in the lake?

Flora and Miles are frequently inexcusable. Dani has her heart and hope ripped out and is distressed. This was inept. How was Dani's death explained? Was she left in the lake? Miles and Flora are thankless to those who saved their brat lives. Dani haunts the gardener. This was uninteresting. The wedding is Flora's and as an adult she is thankless. The older Miles and Henry are equally thankless.

Viola exercised a predominant influence over centuries now Dani is cursed to haunt Bly or whatever the manor is called forever in Viola's place. Dani and the gardener ran a flower shop and were happy. How did everyone so easily get a visa to the USA? Flora and Miles as adults have forgotten Bly and have blatant disregard. The cook did get his restaurant: A Batter Place. Flora and Miles as adults are bastards, irresponsible bastards who got away with being horrible brats. There is no culture of fear and this was not suprisingly bleak. Dysfunction is rife and Dani haunts. Names were changed. I hated Flora and Miles.

“Pulls others to her fate.”

“No such place by that name.”

“When he checks the well, please tell Owen I'm sorry.”

“I am told and I believe that he loves her still.”

“The months to more.” 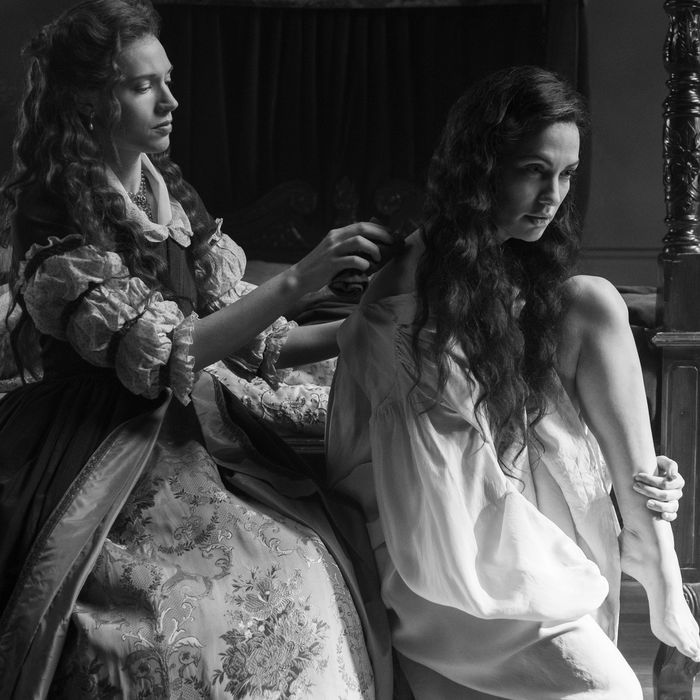 There is a tornado. A cat is okay. This show is unwatchable. There are societal and familial expectations. A man is trapped in a gunsafe. I yawned. This show is rendered untenable.

“You have no friends.”

There is a brawl at a male strip club. I'm done.

“They're out of control! Oh no! Not the tiara!”

The trial is a disaster. People whine. Dennis yaps. This was bad.