There is bizarre green, white and black art. Kato and Britt Reid are in peril. What year is this in? The Green Hornet has a jet? Space aliens show up. This was okay and tantalising. There is no contigency for an alien situation. A woman is missing in mysterious circumstances and an improbable threat shows up.

“I was feared by the corrupt and criminal alike.”

“It seemed like a good idea at the time.”

“It's your last chance to walk away.”

“You might ask yourself what posseses an upstanding citizen to risk everything----to skulk around the city streets at night dispensing justice with the business end of his fists. I wish I had some kind of secret origin instigated by some horrible, personal loss.”

“This car is your ideal of subtle?”

This is set in the modern day. What is Hornet vision? The 'alien' isn't. Another threat shows up. This was okay.

“I was just about to beat him up.”

“If you want to stay with the car I won't judge you.”

How is Zatanna alive? HOW? What are the unliving? Who is doing their hair in the post-apoc world? Damien's weird. Maxwell Lord has kept the class system in place through the apocalypse in a bunker. Trigon is coming, again. Swamp Thing nearly dies. Maxwell Lord gets his head popped off. Rich bastards plot. How did the rich jerks build the killer robots in an apocalypse? This was mmmm.

Civilization is lost to oblivion – the rich bastards are still unapologetically delighted with themselves. Things get abyssal. This issue is a bit mechanical and perfunctory. People ominiously promise and dark forces gather.

“Cold and calculating. Absolutely detestable in every way.”

“Your father wasn't a hugger.”

“He spoke implausibilities with certainty, and we just...believed what he said.”

Nobody is wearing masks or social distancing in the post plague world. There are questionable motives. There are obvious consequences and bitter experiences. The catastrophic event of the plague has been gotten over. There is talk of Belarus and Russia bashing. There is no endless marvellous delight. This was frustrating and discombobulating. This tries for dizzying implications.

“You'll be creating the very suspicion and fear you say you want to avoid.”

“Impossible. But still they came.”

“Plotlines that outstay their welcome.”

“A world abandoned by God.”

Daisy faces disturbing times and a sense of uncertainty and dread. What are Daisy's friends up to? What is happening at the end? It is Daisy's hour of desperation. Daisy is expressing distress. This was good.

“Shatter my air of cool mystique.”

Harley is confronted by the Joker. Harley keeps this a secret. The Joker prances. People give Harley no thanks. A rando is in peril. We see the day the Joker became the Joker. Where are Batman and Robin during all this? This was okay and a fascinating premise.

“You're the first person who has come close to finding me.”

“An impulsive attack on an experienced killer is too risky.”

“Zip-tied to a chair in my own apartment.”

“How does a kid grow up to be a monster like this?”

“The choice to give in to dark urges--”

“Fields where detachment and a lack of empathy are assets.”

“A killer who vanished and remade himself by changing his victimology, crimes, and signature.”

People run around what was once America. What is a gray state? There is incoherence in this crass and garish issue. Things go farcically in this egregious and atrocious title.

“He just likes to sound all deep.”

“I learned things I didn't want to believe.”

“What the hell have they been doing since?”

This one shot is set in the coinless universe. What is the Master Arch? Rangers wield big guns and Kim contorts her body into porny boobs and butt poses. What is Finister up to? Scorpina plots. What are spirit hordes? Drakkon's gone, for now. Kim's old troop don't trust her.

Where do the Power Rangers keep their power coins? Bulk lumbers and the Command Centre is Rita's domain. Trini's thick and Zords have escape hatches? Lord Zedd shows up, changed. Kim is the new Drakkon. This was good.

“This place is nothing but mistakes and bad memories.”

“Anyone who's gone in has never come back.”

“When you shatter someone's trust, there's no putting it back together.”

“I'm piloting a zord. This is the greatest day of my life.” 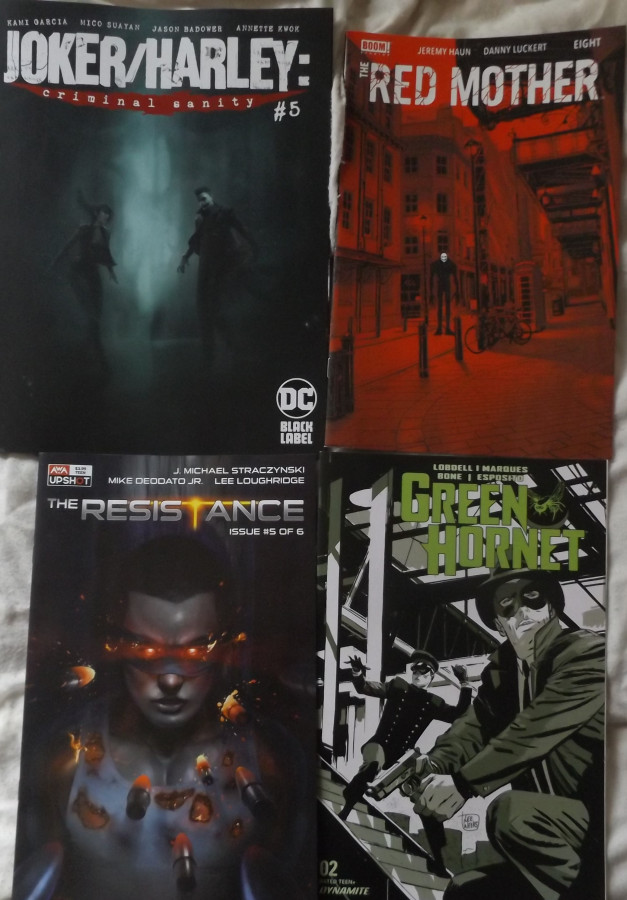 Tags: comics, the green hornet, tommy oliver
Subscribe
Comments for this post were disabled by the author