Lydia heads off to her mentor's house. Justice Hunt bothers Margaret. Lydia has a dark past and people revel in filth. There is no unthreatening comfort. Margaret has furious reactions and there is a whiff of scandal.

Margaret learns her brothel is considered a cursed death house. Woe unto them that call evil good, and good evil: that puts darkness for light, and light for darkness. Lucy sluts. Emily sluts. Violet feels sin. A dwarf hooker shows up. Is that 1 of the 'Derry Girls'? Why are we meant to feel sorry for Margaret? Charlotte has to service a vile man: Blayne.

“No business of yours.”

“Fallen as low as you have.”

“Fall on your face for 5 shillings.”

“6 shillings and a piece of cheese.”

Margaret is an idiot. An ignored begger child is ignored. Why are there sheep? Margaret is emotionally focused on Ludia. There are bums, wigs and fat men. Isabella broods. Men are howlingly appreciative of hookers. Emily keeps a horrified silence until she dosen't. Cherry (Francesca Mills ) plots. Lord Fallon (Ben Lambert) plots and Lucy (Eloise Smyth) is useless. Isabella has a bastard child. Lydia seduces the Lord Chief Justice!

“Treat her as if she were my wife.”

“Got the flap dragon.”

“Stay chaste within it.”

“Business with this harridan.”

“Where are you living? Under a wagon?”

“Long way from the docks.”

Worf shifts into alternate realities. How did Riker get back into Worf's quarters? Wil Wheaton shows up looking greasy as an AU Wesley. Troi and Worf are married in some of the alternate universes. Data doesn't wear his contacts in 1 scene. Worf is XO in 1 reality and Riker is captain. There are different comm badges and a different bridge and a Cardassian crew member. Who could see Wesley as tactical officer? One AU Riker is crazy due to the Borg taking over. There is exposition and aggressive Bajorans. There is bad acting and Worf gets back to his predetermined timeline. This was boring.

There is a Captain Picard day on the ship. Oh FFS. Riker went from the Academy to XO of the flagship in 6 years?!? Riker's former captain shows up and it's Terry O'Quinn (sigh). Did Admiral Pressman leave his crew of the Pegasus to die 12 years ago? There are secrets. The Romulans sneak. There is talk of mutiny and Picard thinks that is shocking and unthinkable. Picard whines. Shut up old man. There is a reveal. There is bad acting. This was okay.

There is a wedding and a societal fixation on war. How many fathers does Abigail have? Scylla plots and witch marriages only last 5 years. Raelle annoys. This has flaws and was not a powerful drama with significance. This was not ingenious. Tally is onto Scylla. There is death as the Spree attack and are fanatics. There is a long fight scene. This was dismal.

“Fail us and your future is bleak.”

“The daughter yet to come.”

There is viciousness and dominance. Why isn't Tally saying anything? There is admonition and dead witches who didn't know they were witches had their vocal cords cut out. There is unkind attention on witches. This show is a consistent failure.

This was desolate. The cadets do flying. There is a disturbing new strategy. Raelle screams and can't act. Where is Scylla? What was the hand thing Raelle saw? People have to live with consequnces of the battle. There are self-consciously dramatic shrill people. This was dreadful. Wars are allowed to create devastation. Who are the siblings? Raelle is told Scylla's dead.

“So lied the priests.”

“I doubt they knew they were witches.”

This ep was made to cash in on the release of 'GoldenEye'. Bashir is on the holdeck playing a super suave, 1960s Earth secret agent. There are stunts and you know his name, you know his number. The name James Bond is never ever uttered but MGM still sent legal letters. Boo! There are quips and Bashir takes out a baddie with a popped cork.

Garak shows up to annoy. Women have 'funny' names. There is holodrama and the mian characters do everything in this profoundly stupid ep. There is hideous interiror design and bad acting. There is nice music ropey vfx and the Bond pastiche is so blatant.

“Kiss the girl, get the key, they never taught me that in the Obsidian Order.” 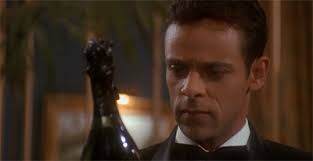