Set the weirdy dial to 11. This tries to be prescient. A POTUS loses re-election and he blames his campaign manager. Time passes and the former campaign manager sees an 11 year old youtube sensation who wants to be POTUS. He's utterly immoral and without compunction. But as he's 11 nobody notices, at first. Nobody has the highest integrity.

The idiot campaign manager (John Cho) has a negative impact and an irrational fixation with making the brat POTUS. Things go badly and the campaign manager ends up fearing for his safety and life. Aaron Douglas and John Laroquette cameo. There are disturbing cirumstances and a moral reckoning is coming. Things are increasingly ominious and the brat is not a believable meance.

This is not enlightening generations. The brat and Cho are are impetuous morons, never shy of courting publicity and they push the boundaries of the impossible. Cho ends up frightened about what the future might hold and the brat's resentment festers into something far worse. The kid's parents are idiots. The kid makes his displeasure clear. Cho wants to feel virtuous without requiring action. The kid gets a frighteningly positive response.

What is the relevance of this? Public frustration makes the brat kid POTUS. Cho was once ridiculed. The kid has no interest in complying and the brat is inexplicably perceived as reshaping history. This gets woeful and is a cataclysmic failure. Oliver Foley the brat kid ends up POTUS despite Cho getting around the age rule by having Oliver's mother as his proxy. But wouldn't that make her the POTUS?

There are false ideas and Oliver has widespread affection and he savours this moment. He stand son the Oval Office desk and revels in being POTUS. He has a swing and popcorn machine in the Oval Office. This is not a far sighted, radical reformer POTUS. Things get tawdry. Oliver is not the most honourable. This was irrelevant despite being okay to start with. People love the POTUS and Cho comes to a bad end.

“I want Justin Timberlake to play me in the HBO movie.”

“It all started out so well.”

“You can come back from this.”

“Lost and regret it.”

“The mean streets of rural Iowa.”

“A stable person would have seen what was happening.”

“Tried to do the right thing for once.”

“Don't want you crying in the bar again.”

“Get other people to get it done for me.”

“Wants a military parade for this sister's birthday.”

“Society is a fragile ecosystem.”

Worf meets his very grown son, Alexander, by K'Ehleyr. Alexander is dumped in the Enterprise daycare. Robert O'Reilly debuts as Gowron. The list of writers for this ep fills the screen at one point. This was wretched and unsatisfactory. Worf gets confrontational. The Klingon Empire is at a critical juncture, again. Worf is Klingon in resolutely obsessive ways.

Picard is the great saviour of Klingon progress. The Tholians are mentioned. K'mpec dies, never to be mentioned again. Men in dark rooms mutter. Worf has a really negative relationship with other Klingons. Worf is in direct conflict with others. Gowron does eye bugged out chair swiveling threatening.

Picard and Worf's ridic secrecy got K'Ehleyr killed. All to cause Worf manpain. Worf dumps his son on others after murdering Duras. Sigh.

“Has been coming for some time.”

“You won't even acknowledge that he is yours.”

“He knows nothing of our ways!”

“Accept the consequences of that lie.”

Anthony was and is a moron. We get flashbacks of Fred (Neil Napier). Luke and Helen scream. Henry's a tool who lies and is the definition of toxic masculinity. Anthony's still stupid. Henry is disgusting and Anthony's stupid and alive and hasn't aged. Fred dies and Fred wants revenge from beyond the grave. Anthony doesn't look 2 years older and has no trauma. This was pretty miserable.

“You have judged me my entire life and all you have given me is your distain!”

“Deprive him of love.”

“Deprived me of my mother's love.”

It is Conscription Day in an alternate America. A witch kills people. She is part of The Spree, a terroristic witch group. Witches made a deal with the authorities 327 years ago via the Salem Accord.

The flag looks different and witches have to serve in the military. What is the Cession? There is talk of Matrifocal Allotments. Witches go to military school. General Sarah Adler is over 327 years old and she signed the Salem Accord. Tally Craven, Abigail, Scylla and Raelle are at military school. There is talk of marks and salva. Raelle and Scylla bore. Who is the They? There is rain and Raelle is a dumb moron. This was better than 'Coven'. There is an obvious Spree mole. I am interested.

“It's how they do combat drops.”

“Before we were even America.”

“Just like your mothers and their mothers before them.”

“Agents of The End.”

The POTUS visits the witch school. WTF are forbidden workings? What are fosterlings? The cadets go off base to Gallows Hill. Who are the old biddies? Mmmm.

“Maggots will reject your fetid corpse.”

“Don't let her take your joy. That's what she eats!” 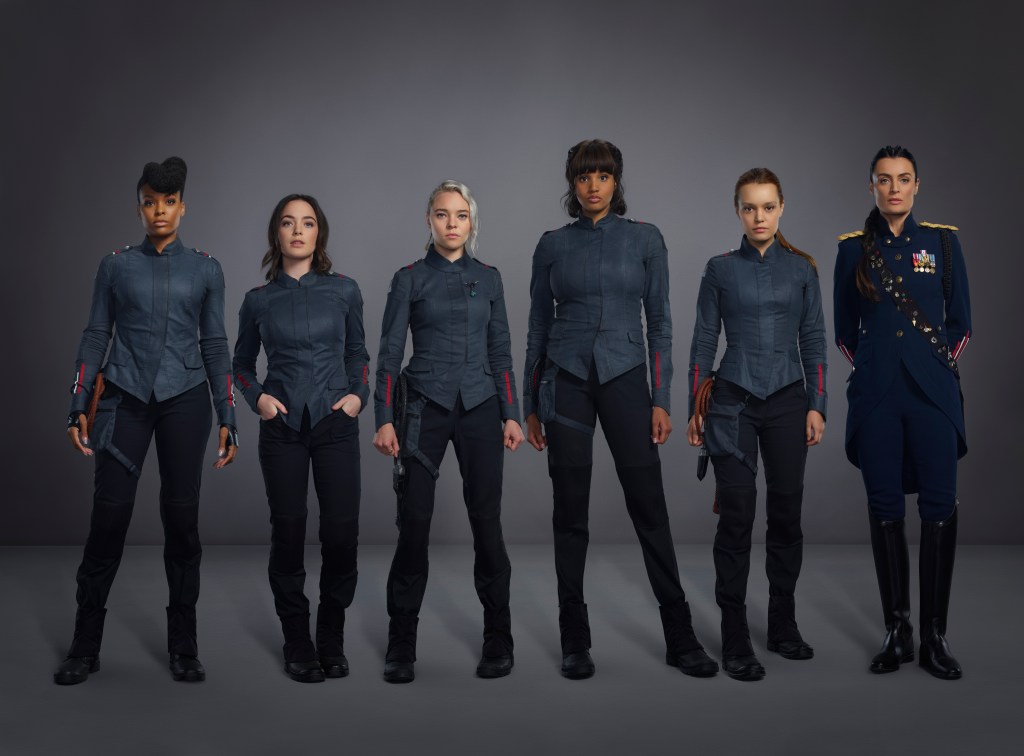 All The Time In The World

The final ep of this show. Of the cast, Bradley Cooper became the biggest star of all. Vaughn's alive. Sloane is evil, again. Where is Sydney and Vaugn's baby? Tom's dead. Lena Olin and Michael Vartan guest star. There are flashbacks and David Anders. Ugh. Amy Acker fears snakes. Decisions need to be made to safeguard the future. Sydney's doomed best friend shows up in a flashback and her doomed fiance is mentioned.

Nadia's dead and Sloane achieves Rambaldi's ultimate endgame. There are no moral victories. Baddies cause distress despite being totally ineffectual. Spy daddy always had a frenzy of anger and was hysteircal and tyrannical. This show had a pretence of grandeur. Spy mommy is alive and then she isn't. Spy mommy spectacularly falls out of favour.

There is hypocritical bleating by people who are wrong ethically and morally. Integrity and credibility are damaged. Did Irina hint that Rambaldi is still alive and immortal somewhere? But doesn't he have a tomb? Huh? This was an irrelevance. Irina is selfish to the end. How poor the judgment of others still is. Sloane faces a terrible fate, that is an image that sticks with you.

“Don't have time to mourn.”

“I am through being disappointed by you.”

“Such a complication in my life.”

“Stars will fall from the sky.”

“It's not every day one gets to be a part of global genocide.”

“Too late to be stopped.”

“This is my purpose.”

“Able to live with that.”