Phyllis and co think that American women are in their kitchens clutching their pearls, sheltered in the burbs in their gingham aprons, waiting for their big, brave breadwinners to come home and protect them from the chaos of feminism.

Phyllis is wildly jealous of Bella and wants to be in the White House. Republicans were once moderate and Phyllis is awful and gets a pie in the face. The logic people spew with such confidence. It is finally noted that Phyllis spends remarkably little time at home and does no housework and her children are background characters in her life.

Phyllis is losing her place as unquestioned leader of the movement to Rosemary and won't step back and look at her own actions. Phyllis and co plot to sabotage the feminists because they are awful. Phyllis has the KKK as security.

“You clearly have Carter's ear, use it wisely.”

“How truly horrible those libbers are.”

Alice spews Phyllis' bully language. She goes to the Womens Conference and develops moral misgivings. Coretta Scott King spoke at the conference. Satan checks under his bed every night to see if Phyllis and co are under there. Alice whines. Pamela is abused by her husband and Alice finally decides to help her. Alice is angry and aggressive to NOW women until she realises they have a point. This was remorselessly terrible and preposterous. It is 1977 and Alice finally feels guilt and frustration about her platform.

“Damage the fabric of family life.”

Phyllis is ghastly and Alice is a grandmother. Rosemary is such a bitch. The feminists are mocked at a political gathering. Phyllis lords it over said gathering celebrating the death of the ERA. Phyllis thinks she'll be in the cabinet. Bella is fired. Phyllis gloats. There is a mass resignation by women to protest Bella's firing. Phyllis thinks she is going to be thanked. Phyllis hates Bush snr. It is 1980 and Ronald Reagan becomes POTUS and will not give Phyllis a job. She's left in the kitchen to have dinner ready by 6. Ha ha ha ha ha.

“Take our country back!”

“Modern liberal era is over.”

This ep is apparently shown to US Air Force cadets to demonstrate the Honour Code. Picard can't pronounce Betazoid. But of more importance there has been an accident at Starfleet Academy just before graduation. Picard rants. Beverly barely reacts despite Wesley being involved.

This ep had a significant impact on Wesley's future. Ray Walston and future 'Star Trek: Voyager' costar Robert Duncan McNeil guest star. Why wasn't Beverly told personally of the accident? Picard was told, not her. Wesley is a member of the Nova Squadron flight team alongside Locarno (McNeil), Sito (Shannon Fill), Hajar and Josh, sadly Josh died in the flight accident that is the subject of this ep's narrative arc.

Is is stll debated why McNeil ended up playing Tom Paris on 'Voy' who was an identical character to Locarno with a near identical backstory, rumour has it that the fact TPTB would have had to pay rights to the writers of this ep for every 'Voy' ep aired led to Locarno morphing into Tom Paris for 'Voy'.

Wesley comes in for intense criticism. There is no dream of space. The UFP is a paragon of civilization and Starfleet has a highly militarised lifestyle. Sito, Wesley, Hajar and the late Josh acquiesced to Locarno's urgings. This ep would also have a profound effect on Sito's future as demonstrated in the later ep 'Lower Decks'.

Wesley doesn't seem to care for his mother. Why does Welsey never really talk to his mother? Picard is all but yelling: DISAPPOINTED in Wesley's face. There is no palpable sense of momentum but this ep is good. Picard also cannot pronounce inquiry. The plot is all about Picard and not Beverly reacting to Wesley lying and partaking in a coverup.

Picard feels personally connected to the incident and has a sense of disappointment in Wesley. The wise garderner utter gnomic wiseness. Picard says he wouldn't have graduated if not for the gardener?!? Nova Squadron faces its downfall in this ep, but 'DS9' showed that it was replaced by Red Squad which also had a downfall.

Locarno bosses Wesley, Sito and Hajar around, Locarno's fate would be revealed in a novella but Hajar's fate remains unknown. There is dated VFX and the cadets assert their own allegiance to each other. Flight teams have emergency transporters not escape pods. There is aspiration and personal connection and poor treatment and how did Ro and Sito get into Starfleet as non UFP members? Nog as a fellow non UFP member was nominated by a command level officer namely Sisko on 'DS9' – so who nominated Sito and Ro?

There are awkward silences and dead Josh's father lumbers around. There is wooden acting and naturally it was Wesley's flight recorder that survived. Wesley and co are cautious and disaster looms as the plot comes to a boiling point. Picard is all but yelling: SHAME at Wesley. Oh piss off you hypocrite.

There is a long running dispute and Picard meddles and this is allowed. There is devastating news and this was not deliciously evocative. Locarno would never be mentioned again on this show. Wesley was wishing to act with the very best of intentions. What are the Starfleet Academy entrance requirments? Truth is sacrosanct, except in the movies where Picard has a totally different personality and in 'DS9' and no doubt in 'Star Trek: Picard'.

Locarno smugs and has venality which Sito, Hajar and Wesley do not see. Picard wishes to shed light on a murky corner as if the SA top brass do not know what is going on. There is a sneery Vulcan and logistical challenges and no relevant precautions or systems. Locarno is a fading myth after being a big man on campus.

There are ridiculous arguments and Wesley has long standing issues and there is public outrage over lies. It is a volatile time. Picard treats Wesley as a disappointingly lazy cop out. There is talk of a coolant interlock and how Nova Squadron were inimitable talents and hotshots. The obvious reasons for the lies are uncovered: Locarno got his team to attempt a flashy and difficult and banned flight trick called the Kolvoord Starburst which involves igniting their plasma trails.

Josh was killed as a result of Locarno's abundantly obvious wish to graduate as a living legend. Why does Wesley have such sustained promience on this show? I wish Picard would shut up. Fill who played Sito is now a social worker. Beverly is milquetoast and one is cynical about Welsey and Locarno's actions at the end of this ep. One doesn't watch with baited breath. Lies engender an antipathy to Wesley, he never did become an outstanding officer.

Picard's temper has a violent escalation. Call his bluff Wes! There is complexity, uncertainty and ambiguiy and this was oddly compelling. There is devastation wrought by Picard. There is no rational investigation. Locarno is manipulative and why didn't the SA brass figure out the truth?

Wes turns snitch and things are deeply off kilter. Beverly has zero reaction to anything. Nova Squadron are held culpable. It is jarring and disconcerting how much of a bully Picard is. There is no consideration and Locarno is expelled just before he was to graduate. Sito and Hajar and Wes are left behind to be held back a year and be treated as pariahs by their classmates.

Picard needs to shut up. Wes clarified the cirumstances and responsibilities but the ending the writers wanted was that he didn't. Which would have been interesting. The punitive Picard is an imposition and his message is not subtle. Questions of duty and honour arise. Picard did deliberate, cynical and emotional manipulation. Thankfully Starfleet had flung him out by the time of 'Star Trek: Picard'.

“There's nothing to tell.”

“Captain Picard. Of the Enterprise, no less.”

“On course for Titan.”

“We all agreed not to lie to them.”

“On my port quarter.”

“Your unwillingness to offer an explanation.”

“Direct cause of the crash.”

“Suspicion is not proof.”

“They know what we did.”

“Big story about duty and honour.”

“Playing on my ship.”

“Everyone knowing what you did.”

“You have difficult times ahead.”

“To the other cadets, the members of that team are gods.” 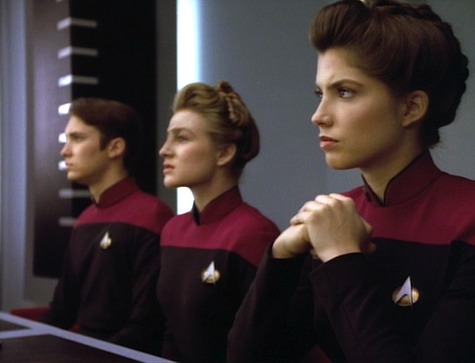 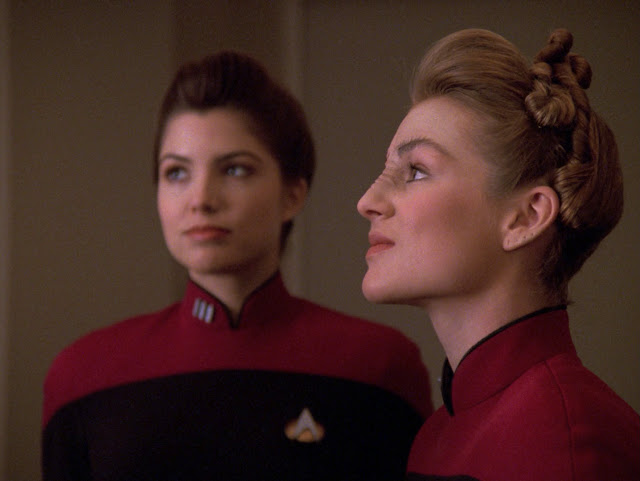 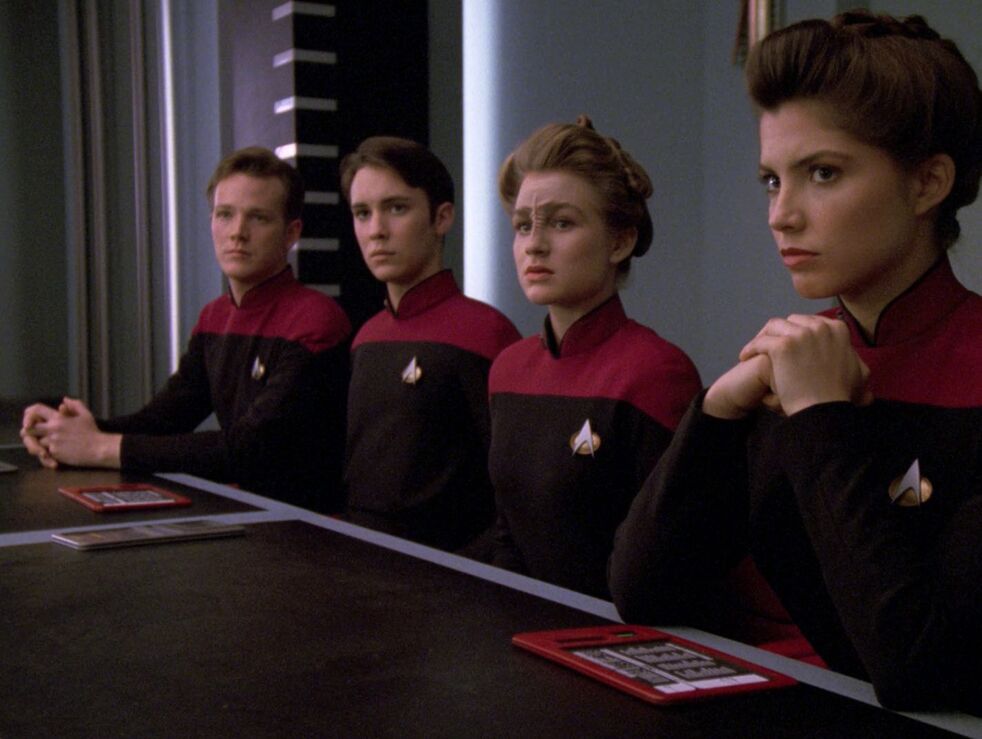 2 years have passed. Henry has a wall of crazy and anger issues and he does late night tree chopping. This was idiocy and absolute nonsense. Neil Napier of 'Helix' is in this as a patient of Katherine's. Henry rants about an extremely rare tree and may have dementia and is contentious. Neil Napier and his shaved head does stuff.

Henry is aggravating. Katherine is yelled at. Henry slaps his useless drunk son Luke. This was not compelling and Henry thinks he has righteous anger. Luke has man pain hair. Henry yells an awful tirade of abuse, it is a tumultuous time. The ex wife's new man left her. There is talk of dead pets and Susan finds something odd. There are flashbacks to kid Luke and Katherine – who was the woman Henry gave money to? Who was her kid?

Henry screams at Katherine as she tries to relive a family memory. The ex wife is pregnant and Luke dosen't want her to have it cos Anthony would be jealous. There is a sighting of Anthony. Helen has issues and there is talk of crime. Henry can't act affectionately and maybe Anthony is a child psycho who ran away. Or did the animal abuser kidnap him? Katherine bears her father's scorn with sad, unsuprised eyes.

This was was not a terrific monent in tv. There are damaging consequnces. Does Luke know Henry isn't his bo-dad? This wasn't a real delight. There are significant consequnces. This was inherently improbale and Henry's rigid moral absolutism inflicted pain on people he does not care about. There was a constriction of hope and ambition.

“The area got kind of low rent.”

“Moved on to bigger game.”