This is a bad zombie movie set in Reno. This was aggravating as TPTB mistake ennui for depth. Logic and quality come too low in TPTB's priorities. People are not too bright and there is no fondness. There are stock moments in this hilariously dated movie. This is ponderous and it has vapidness and petulance and it was limp and disheartening.

Kevin Spacey puts on a weird accent to play Nixon. Michael Shannon is Elvis and dislikes hippies. Elvis has delusions. This was inspired by the real meeting of Nixon and Elvis – what did they talk about? This tries to show the real Elvis beneath the ugly suits, bad hair and garish jewellery. Alex Pettyfer, Johnny Knoxsville, Colin Hanks, Evan Peters and Tate Donovan co star. Nixon is told to meet Elvis to improve his image problem with the youth vote. Elvis whines about being a commodity. Nixon rants about being ruined by a nasty man telling stories – oh the irony of Spacey uttering that line. This was very good.

“You swear this isn't a joke?”

“Take that Woodstock for example, what the heck was that?”

This is a very obscure UK horror co starring the guy was who was 'Brat Farrar'. Coming up to her weddingb to a Falklands war hero, a woman has bad dreams. Reporters bother her and the virginal bride to be makes an American friend. There is bad acting and a demon. This was okay and Jimmy Nail and Timothy Spall are in it! 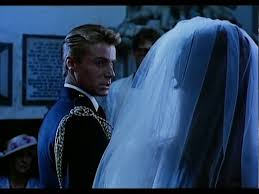 Tags: brat farrar, house of cards, movie review
Subscribe
Comments for this post were disabled by the author