Movie Reviews: Scandalous! + A Fantastic Woman + Story Of Fire Saga + From A House On Willow Street

A documentary about how a sports rag became a gore paper and rose out of the gutter to become a celebrity/true crime tabloid known as the National Enquirer. The history of this supermarket staple is told by people who worked there. The tabloid won an award for its OJ coverage but the death of Diana and 9/11 and a new owner caused its downfall. This was good. Mainstream media annoyingly sneers at the tabloid. There is talk of war and Arnie and Bezos and an appearance by Ronan Farrow. People claim the tabloid became partisan propaganda clawing at the dregs of its earlier success.

“How to tell if a child is a potential hippie and what you can do about it.”

“When the child begins showing the 'hippie' signs. Discipline at that point might make him more hostile.”

“Furiously on the phone.”

“Stick it up your junta.”

“Envy was a very key factor.”

“Betray you for money.”

“Gone after Donald Trump and got him and she was Mrs Trump.”

“Have affairs with interns.”

“Be a little grander than he was.”

“Being a friend of powerful people.”

“War effort that was coming.”

“Any relevancy in today's world?”

“Very shameful aspect to it.”

“Bad stench to this thing.”

This offically sanctioned movie focuses on a singing duo who want to win Eurovision at any cost. People are publicly hostile to the wannabe Icelandic singing duo who call themselves Fire Saga. Eurovision's hold on the popular imagination has faded.

There is lots of singing and the duo's declaration that one day they will win Eurovision is widely disbelieved as lunatic ravings. Lars has an odious, monstrous, controlling father (Pierce Brosnan). Lars faces extreme hostility and is pathetic, whiny and friendless. His bandmate is his ideological ally and his dad mocks them with his silly accent.

There is a chaotic, trauma filled situation and people have discourteous disregard. Past winners lurk and there is an increasingly sympathetic public attiude to the duo. There is stress and distress and Fire Saga lack key skills. Iceland plans to throw Eurovision and so send them. A boat blowing up helps too.

Lars (Will Ferrell) and Sigrit (Rachel McAdams) carry ruin and act performatively and they're subjected to ridicule. There are no calm reassurances. This not emotionally textured and is a bit inadequate. The Eurovision is being held in Scotland?!?! There is no public outpouring of respect and admiration. Dan Stevens plays a cartoonishly sinster Russian entrant. He also never wears a shirt.

People have complete indifference to logic and sense and taste. There are stagy flourishes and the duo are comically unsophisticated. There is credulity in this satisfactory dramedy. There is singing, Graham Norton and Demi Lovato. There is absurdity and obliviousness. The duo are routinely jeered.

One grimly attends to this. Lars dad hates such trangressions as merriment. This was mid level. People are largely disdainful and this was a ruthless parody full of whining idiocy, jeering and emotional challenges.

“Draw attention to my groin area.”

“These guys are awful!”

“Played music at your 1st wedding.”

“Why they're here is anyone's guess.”

“Your father is ashamed of you!!!”

“You have wasted your life...your life is a joke!”

“Ask the elves to help us.”

“My older brother went to school with you and he told me that you were weird.”

“The elves must hate us!”

Thieves plan to abduct an heiress in this South African horror. They're cold and wannabe hardcases but their brilliant plan goes awry. The house is full of horrors. There is talk of a book written by God and an exorcism. This was dumb and full of bad acting.

“Walk or crawl out of hell.”

“No going back from this.” 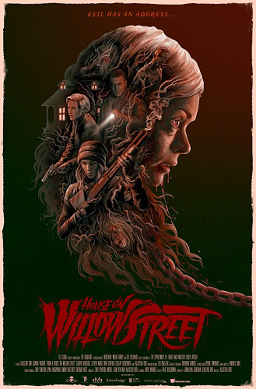