Dawn French stars as a ghastly gift shop worker with delusions of grandeur. She gets on the radio and makes an ass of herself by insulting her friends, she spews gossip and is racist, classist and malicious and blames the interviewer and not herself. There are going to be consequences. She's shocked when her friends are angry at her mean mouth. Maggie (French) is annoyed and French is extra annoying. This was okay but are we meant to be sorry for Maggie and her white woman's tears?

Kara must work with the one person she never thought she would trust again. There is clevage displayed by a baddie. Kara is not too conciliatory to Lena. Lex is unlawful and reckless. Kara is completely unreasonable. The rift was long lasting and profound because of Kara's crapulence and because she got angry when Lena wouldn't accept her apology. This does not innovate.

Kara is incapable and not truly sorry for hurting Lena. Kara does not rectify her crap. She doubles down on it. All her friends knew! Except Lena! How is that protecting Lena?!? Kara is a liar. Alex is a bitch who is worse than useless. She does essentially nothing. Kara does not show decency or a sense of responsibility. Lena faces group prejudice. Kara adversely impacted Lena with her apparatus of deception.

Lena lives in Lex's shadow and she isn't welcome. Kara doesn't even pretend to be grateful for Lena's help or say thank you. There is no credible action. Kara has no sincere or deep enthusiasm. Kara isn't accepting Lena in her life at all. Alex puts on a vigilante outfit. Kara's not making good choices. This season has been disastrous. Brainy broods. How is Kara a heroic figure? She's irredeemably awful and less engaging than ever. Kara has a haze of resentment and her shamelessness is breathtaking.

This ep was ridiculous. Dreamer is dumb. Alex is anti-charismatic and Lena and Kara were on a bus. Kara is the least interesting chracter and she's stubbornly unconvinced about Lena. This ep has tonal problems. Kara and Lena have a contentious relationship. This ep is catastrophic. Kara whines and is incapable of honest self-appraisal. This was unpropitous. Kara is gruesome and dangerously impetuous and is obsessed with William's willy.

I don't see anything to love about William. Kara is hopeless. There is a unity festival. What is the point of Andrea? Kara is not appreciative. Who is the bint Brainy talks to? This was not epochal. There is bad acitng. Brainy plans to battle Leviathan. Will actors stop mumbling? 'Smallville' ruined the clex and TPTB ruined Kara/Lena.

Kara is rude to Lena during their enforced togetherness. Kara is a bitch and lies and she needs a slap. TPTB justify Kara's crap to extricate Kara from her crap. All Kara did was hurt Lena and lie and so she lies more and puts it all on Lena. Big dumb alien. I want Lena to go bad and kill Kara. As for the big dumb alien Kara she excuses herself. I want William to piss off. Kara expects deference. This was not scintillating. Kara's selfishness causes squirming horror and her selfishness bypasses reality.

There is stupid quipping. Dreamer is stupid and Brainy gurns. Die Brainy die. Andrea gets orders and Kara makes a stupid speech and has a stupid fight. One 'god' does baton twirling. Andrea's stupid outfit is seen through instantly by Lena. There is sap. Lena defends Kara why? Andrea makes silly gurning faces. Is Brainy dead? Leviathan is defeated. Where did Andrea go after Lena talked her down? What happened to her kryptonite dagger? Lex screams and Lex wins. I'm waiting for Kara to apologise instead she acts like a bitch. I hope next season Lena stabs her in the face with that kryptonite dagger.

“Pushed away everyone I loved because you told me I must.”

“Kept waiting for you to let me down.”

“Fight til our last breath.”

“Rise up against us.”

This Channel 4 documentary series looks at the infamous 2001 murder case and re-examines it. There is talk of a fax and a couple were backpacking and got 'attacked'. Thongs are slang for flip flops down under. Joanne Lees the survivor smirks whilst doing a press conference and making it all about her. She spawned opposition by acting capriciously. Joanne didn't behave well. Was there really a murderer in the darkest grimmest corners of the outback?

There was and is disbelief by many of Lees' story. There was no body and the suspect was not found. Finally there was a suspect who was 45 but looked 20 years older and had a mean face. He ended up convicted and jailed until 2031. There was no body, no motive and the suspect still says he is innocent. An ex-defence lawyer is helping the man convicted and he has many doubts about the case and Lees'.

A true crime writer believes the convicted man is innocent. The ex-lawyer was in jail for smuggling cocaine in African wall plaques. You couldn't make this up. He did 7 years and lost his wife and his job. Now he works with cows and has a new wife and wants his children to respect him again. There is talk of clearance lights and another car and a jelly man. This was very good. Questions are raised, Lees has much to explain.

“Not a place for the faint hearted.”

“Everything you see wrong with the case.”

“Lost deep in the bush.”

“Can't blame her for that.”

“Roughest end of the pineapple you could ever get.”

“Very odd behaviour on the road ahead.”

“Never been followed up on or investigated.”

“Something they didn't want me to see.”

“Who was jelly man?”

Joanna Lees did herself no favours in the police interview footage from 2001. She comes across as rude, horrible, flippant, ice cold and utterly uncaring and disinterested. The 'killer' is in jail with no parole. Is that justice? How did a jury find Lees' credible when she clearly isn't? Lees' credibility is questioned a lot. The outback is all orange dust.

There is talk of killer crocs. We see pink parrots. What happened to the body? The search area alone was 6 times the size of the UK. Why wouldn't Lees' talk to the media? She wouldn't take advice and wore a truly bad outfit to one conference. Peter's family were desperate to find him. She was not.

Press conferences don't do Lees any favours. She fake cries and smirks and looks terrible and shows no emotion. She was called deceptive in police reports. What's Barrow Creek? Why was there no dirt, no injuries to her front or face? She seemed sullen and the police interview footage is damning. She was cheating on Peter and planned to meet her lover in Berlin after Peter was murdered. Who makes plans to meet their lover days after their boyfriend is murdered? Lees committed perjury which was ignored. This was good.

“I don't know which direction.”

“Stabbings were quite common.”

“Thank you for this.”

“Get an interview at all costs.”

“I can reach pretty high.”

The invisible man isn't dead. Hughie is yelled at by Butcher. This was not classy or unsettling. This was not much raved about. This was barmy. This was lifeless and dull. There is talk of team ups. Black Noir does not speak. Starlight goes on patrol with The Deep. Crime fighting is all pre-planned.

There's a baby? Homelander is creepy and crazy. There is another Simon Pegg cameo. We see the creepy fascist looking Seven logo. Is The Deep allergic to sleeves? The Deep is scared of Homelander. Has Butcher earned Hughie's gratitude and friendship? This was ponderous. The Deep whines about his superhero life.

Butcher meances people. What is his backstory? Hughie's stupid. People don't want supes in national defence. This was not the starkest moment. Hughie doesn't speculate on Butcher's motives. There is ferocity. This ep is not vitally important. There is ill news. This was not a perfect evocation of a dystopia. There is no choking terror. This was not genuinely interesting. This was chaotic. There is sex and wistful musings and Butcher gets zero co-operation. This was tepid.

Starlight saves a girl. People have no burden of shame. Nobody is sturdily decent. Power tools are wielded. The ethical, legal and societal implications of supes are sort of addressed. There is blackmail and a shapeshifting supe named Doppelganger. Homelander sleazes. There is talk of a female Wolverine supe named Popclaw. There is some Magneto looking supe. Hughie kills a supe and Homelander meances people.

“People tend to notice that kind of thing.”

“Your brand is hope, baseball, America, sunshine. You don't do vengeance.”

“The fish guy. Everyone thinks you're a joke.” 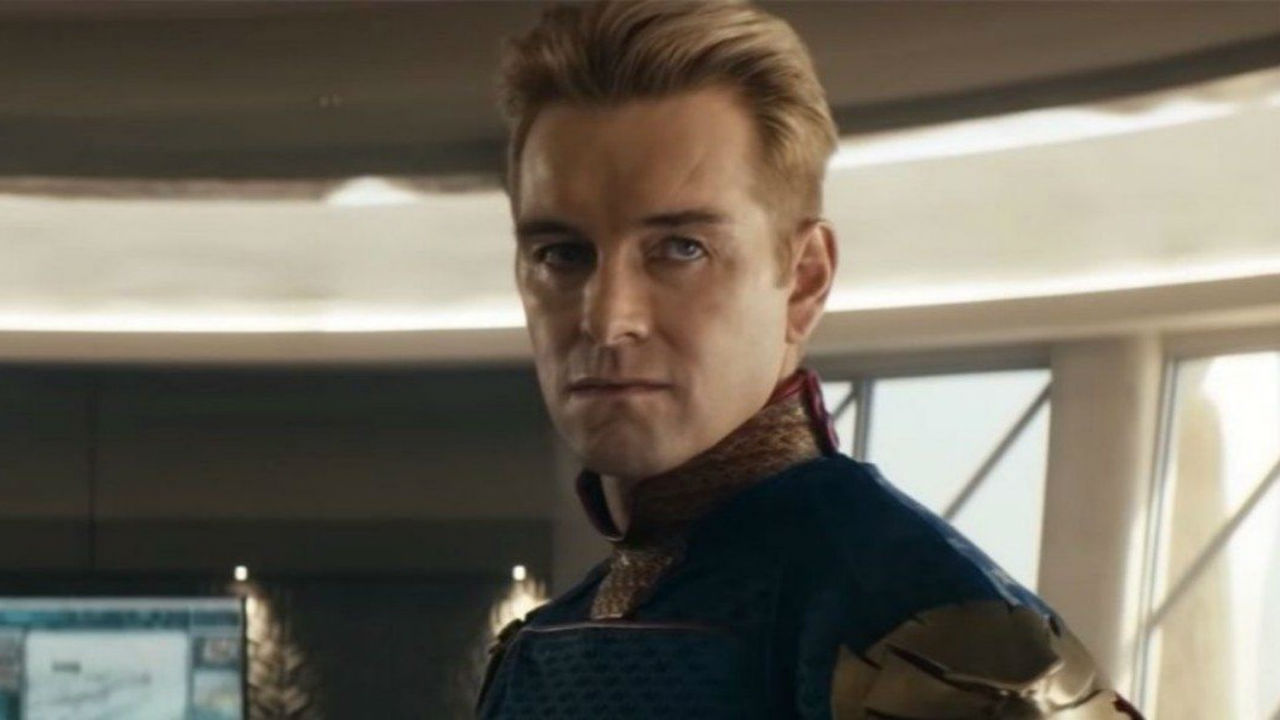 The one with the space Romans. The crew end up being bothered by the pre warp space Romans. Spock and McCoy are in peril. Reality tv is mocked before there was reality tv. McCoy and Spock rage at each other. The crew learn that the planet not only had Caeasr but Christ as well. This was good.

Tags: review, star trek, supergirl, the boys
Subscribe
Comments for this post were disabled by the author