A mythical figure returns to a planet to fulfil a 1000 year old contract in this script which was recycled from the aborted 'Phase II' show. Marta Dubois guest stars as a Federation science station is under siege from an angry mob.

A devil woman name Ardra (Dubois) and her huge 80s hair shows up to claim the planet. Picard will not let this go unchallenged. There is bad acting and Picard mocks such silly superstitions. There are hostages and Ardra promised a 1000 years of peace and prosperity but on her return, would enslave the planet. If it is bad luck to speak her name, why do people keep saying it?

There is a collective gasp as Ardra returns. Picard's speechifying is an inevitable requirement. Ardra has audacity and Picard patronises the natives. An entire planet has apocalyptic views, Ardra wants to subject them to servitude. There is no desperate uncertainty. Picard has a determination to be unimpressed. This was overblown and done in all seriousness.

There is no cosmic wonder and Picard is unintimidated. People wonder is Ardra is a Q. Ardra has orchestrated her mystriques. People are gravely concerned. Ardra wears pleather and large hams yet the sexist Picard rejects her totally. People on the planet are terrified of the consequences. Ardra makes S&M jokes and is an absolute impossibility. Ardra expects complete capitulation.

This was not plausibly uncertain and Picard says the myth of Ardra was created to motivate change. Picard sees her as a hussy and a con artist. This was okay if not supremely competent. Picard is unfooled by Ardra's pleather thong. Worf bumbles.

TPTB hint that Picard fancies Troi. What are Z particles? Picard takes the devil to court. Ardra pants over Picard, she'd have had more luck with Kirk. Data's role in this ep would have been Spock's or Xon's. Is there no JAG officer on board? This does not evoke wonder and this was not audacious and it is not a coherent whole.

There is no intoxicating impact, this was asinine simplicity. Ardra is meant to threaten. The locals spew hippie talk. Ardra is a terrible imposition and there are misconduct allegations and vindication for Picard. The ending is an ass pull and Picard constantly refers to Ardra as a “woman” with open disgust.

“Turned their backs on technology.”

“Ardra is coming back.”

“Shaking of the cities.”

“You shall regret that.”

“All that displeases you.”

“The advocate will refrain from making her opponent disappear.”

Kirk, Spock and McCoy encounter Old One worshipping space witches in this iffy Halloween ep. The trio end up chained up in a dank dungeon. Kirk/Spock/McCoy were true companions; part of the generally accepted patterns of life. Yet in 'Generations' Kirk died alone and did not attempt to rejoin them. The finality of his old life. Also Scotty ended up in a transporter buffer til the 'TNG' era and Spock ended up in an alternate timeline and saw Vulcan blown up. Kirk beats up DeForest Kelley's stunt double. 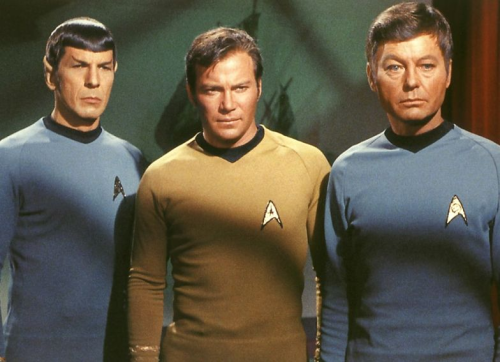 Liz has met her mother but she isn't aware. Red bothers people. Red isn't Red. Harold and Red stroll around Iran. Harold lies and set up a friend. Liz ignores her child. Red is Ilya. No.

“Burn the city to find him.”