JJ leaves a trail of chaos behind him. He's unruly and there is impassioned self aware speechifying. None of John B's gang is the deep clever type. The cop has complete distain for JJ and his catalogue of poor behaviour. JJ's dad is rather more threatening. There are dark events and JJ's dad beats him bloody in a car outside the police station. This active abuse causes no public revulsion, outrage or anger.

The island is a hotbed of cliques and social tripwires. John B goes to school only to get a teacher to translate the letter. The cop has a secret. John B has a relentless quest for the gold. There's some useless island celebration. Sarah dislikes her stepmother. Sarah's rich dad annoys. JJ runs away from home. Pope's dad is enormously frustrated.

People have rage that doesn't count the cost. This show is increasingly dull. People groveled for 12 years to get into the Island Club. There is a disconcerting prevalence of out of touch rich kids on the island. Sarah's boyfriend and brother have been shaped into a twisted patriarchal ideal. Sarah's boyfriend is pressuring and punishing her by being disrespectful, emotionally distant and angry as a form of coercion.

Sarah is being incapable of being affectionate, appreciative, communicative, respectful and loving or complimentary. There is anger, pressuring and emotional backlash. JJ is beat up by rich brats with enduring resentment. Things aren't healthy or sustainable. There is entitlement and no acceptable compromises. John B plans to hang out with Sarah.

Decisions have no gravity. Rich kids get away with continued abusive deplorable behaviour. John B thinks he knows where the gold is. John B is impervious to criticism. This proves so dull and there are negative associations and self imposed pressure. The poors live in semi-servitude to the rich who live in exquisite pleasure.

The rich are a touch unkind. Sarah's dad is bad and he has the compass. There is no sense of awe. This was rudimentary. This was not hugely affecting and this was not winningly absurd. The ethically dubious rich people annoy. Sarah's sister is a tattle tale. Sarah is not fundamentally transformative or hugely beneficial for John B.

This was not relevant. John B is not reflective. There are no visceral reactions. Sarah has a damaging long term effect. Nobody has insight and there is no dramatic exploration. There is no isolation or claustrophia on the island. Sarah's boyfriend shoves John B off a tall place. Sarah's trouble.

Who is paying John B's medical bills? John B is a moron. Sarah's dad sleazes. Why does John B fear DCS so? Sarah's dad says he'll be John B's legal guardian. This was idiotic and dreadful.

“Here we go again with this.”

“Send you to autopsy school!”

Nobody is dignified in reserve. The rich live a rather indulgent lifestyle. John B is hopelessly reckless. One is a complete loss to understand how dumb he is. Why isn't Sarah's casually cruel, annoying, obnoxious, argumentative, self righteous, arrogant tool of a boyfriend been arrestred for GBH and attempted malice murder?

Tension hangs in the air. There is no intense chemisty between John B and Sarah who have very different social standings. John B ignores the girl he previously kissed. John B and co continue their catastrophic treasure hunt. This was drivel and nobody is eminently sensible.

The rich are incredibly devious. Sarah's boyfriend faces violence with cruel suddenness as angry drug dealers want their money. He's really really desperate. John B is of the roughest, most ignorant sort. This was not hugely entertaining. This show is becoming tedious. John B has a life of fighting and general mayhem. There is talk of a murder.

John B is damaged, defective and squalid. The boyfriend gets no savage rebuke. There is no excepional charisma. Sarah's dad is so obviously a baddie. Sarah's boyfriend yells slut a lot. The cops head out to a spit of land. There are no major decisions and it is immensely challenging to care. Sarah has entitlement and superiority. John B can't be self denying and Sarah has self gratifying predatory exploitation.

Sarah's abysmal and John B declares Sarah his girlfriend. There is viciousness and a deluded endeavour. This ep was totally excruciating. Sarah smugs and bullies and there is no personal transformation for John B. Sarah's brother steals. There are no good intentions. John B is thwarted through bitter experience. Illusions are shattered and hopes dashed. There is no eye opening insight.

This was trivial. There is expository dialogue. This tries to evoke sticky heat but it does not resonate. John B has facetiousness. John B obsesses over Sarah. There is little substance and the cops make connections. There are contradictory complexities. Sarah's dad faces off with the drug dealers. This was underwhelming and this was not compellingly plotted. I don't care about John B's life of suffering.

This ep was a complicated mess, John B is hurtful and this is not compelling. Sarah's brother is disowned. This was not engrossing. John B, JJ and Pope pull a stupid prank. This was crude, blatant and clumsy. Sarah yells and John B's ignored female friend has bitter experience of a friendship with her. Sarah ghosted her. Ghosters are scum. Sarah ghosted and abandoned her one time BFF. Sarah loves bitter disputes and one feels horror at her behaviour and relentless campaign of being moody, rejecting and cold.

This was daft and Sarah is a shameless hypocrite. John B drools over Sarah who bullied his friend? Scumbag. Water finds its own level. John B needs a kicking. There is an anxiety ridden holding pattern.

This ep goes to farcical extremes. I don't care about John B or the adventures that befall him and his gang. Adults are petty, taunting and corrupt. This has a dearth of dramatic incident – this ep was creeping tedium. John B is stupid. For John B, no other answer than giving into his every want is acceptable. He's a selfish psychotic narcissist. This was epic incompetence.

John B and co behave atrociously. John B treats his 'friends' with an indifference tending to cruelty. Only John B's deranged ambitions matter. He is loathsome. There is an absolute breach with sense. John B's pernicious fantasies, deceits and absurdities go on. The gang home invade an old woman. This was turgid and John B has maniacal self-involvement. John B thinks he's found the gold.

“You ripped the front door off its hinges?”

“What kind of water?”

“I would rather drown than stay here with you.”

“They're not coming back for you.”

“Why are we always getting shot at?”

The Norway seed vault is raided and seeds stolen. There is talk of the Irish famine and an economic hitman. Sasha Roiz is menaced by Eve. This show is silly.

One struggles to find something to like about Sophie. Jacob doesn't apologise for his crap. The Joker aka Jack Napier is mentioned. Jacob is wifully muted. Sophie sparks disbelief at how awful she is, one is deeply disinclined to care about her. Where's Gordon?

Sophie's used up all her goodwill. Why isn't Jacob divorcing Catherine? I cannot see a single benefit Sophie brings to this show. Sophie has no moral courage. Sophie knows Kate is Batwoman. Sophie isn't contrite and planned to tell on Kate. Mary babbles. Why wasn't Catherine arrested for trying to murder Alice?

Catherine built a weapon to penetrate the batsuit. Why isn't this bitch being arrested? Will someone do something about her? Luke bores. Penguin was mayor? There is bad acting and Sophie needs to be chastened. I don't like Sophie, not a bit.

Luke is a selfish moron. Alice has an annoying sidekick. This was dire. A killer will not have mercy on the corrupt. Jacob is blatantly wrong. One feels fanatical hatred for Sophie in this disastrous ep.

“Might as well hand it over to the crazies.”

“Brought out all the crazies in Gotham.”

“Worst people Gotham ever spat out.”

“Add Batwoman to the list of people you hurt.” 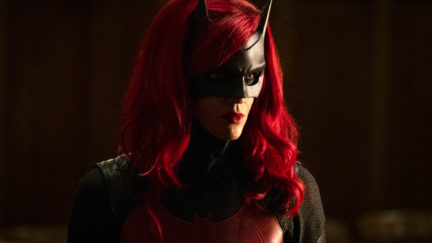 A shape shifting alien creatue/salt vampire drains the salt from humans. The alien planet looks like a set. McCoy thinks his ex is around but it is the alien pretending to be her. The title is a bad pun. People see the salt sucking alien differently. The alien wants to shag McCoy and he looks mournful. This ep makes McCoy looks like an absolute idiot.

The alien does devastating acts of destruction. People are petty and unhelpful and Spock sits in the captain's chair. This was devastatingly dull. Things get fractious and Rand and Uhura wear dangeorusly short skirts. The alien is tempted by a handful of salt tablets. Spock yells and slaps the alien around.

“It's killing the captain! Shoot it doctor! Quickly!”

“What you want is unimportant.” 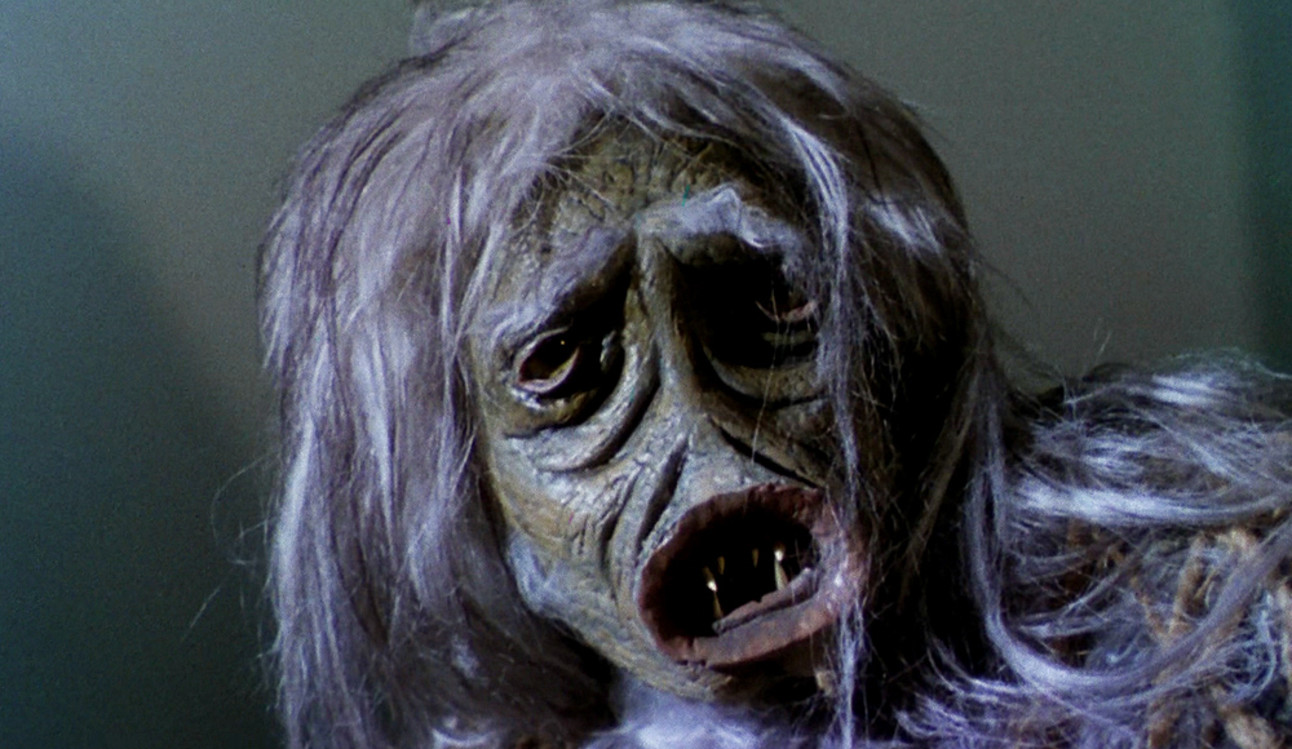