The final ever ep. Oliver is Spectre. I'm laughing. Moira has been brought back to life. How do people remember the Crisis? Dinah is SCPD captain but in 8x09 she wasn't and had been erased from existence. Here she hasn't been.

The 'Emerald Archer' documentary is seen and people are mournful for Oliver. This was not affecting. Lance is alive again and Paul Blackthorne is still bald. Laurel lurks in this tranquilisingly dull ep. Lance (the former jackass) is mayor. Oliver never expressed regret for his multiple murders. Sara lurks. Oliver didn't save his Laurel from death. Mia needs to desist from annoying. Thea and Roy broke up. Emiko is alive and not a baddie.

Felicity bores and she was a bad mother. Oliver was an ass, he deserved whatever bad things came his way. Oliver had horrible intent and walked a lonely path. There are no moral or ethical stakes. Mia appears after the cliffhanger of 8x09 – where is William? She doesn't seem concerned.

Meanwhile William has been abducted in the present. Thea bitches and there is no desperate heroism. What awaits on the far side of the Crisis is not pretty. Felicity mumbles and there is no scrupulous regard. William was bugged by Felicity?

There is a Kord mention and Thea needs a good kicking. Roy proposes. Ragman shows up. What became of Athena? Diggle wears his stupid helmet one last time and Lyla gets hysteircal. Mia tries to be threatening and Oliver was never reticent about killing poeple. TPTB impose respectability, reverence and unquestioning respect on Oliver. But it is a joke. There are fight scenes and incoherence and I've no idea what is going on.

What rights should a citizen expect from the state in which they live? Not to be murdered by an unrepentant vigilante who is then proclaimed a hero. There are social tensions and Oliver acted like murdering people was a justified response to everything. Doesn't William remember this abduction or meeting Mia? Oliver oppressed people that were already oppressed.

Oliver never encouraged good behaviour and people excused him. Oliver was indefensible. Diggle tries to show how tough he is – get a real job! How did the Queen family get stately Queen manor back? What happened to Thea being a junkie? Did she ever graduate high school?

Tommy's alive. Will he appear in the Mia spin off? Thea and Tommy never speak or mention being half siblings. Where is Slade and his sons? Diggle moves. What qualifications does Rene have to be mayor? The Arrowcave is shut down and Oliver was not a founding moment. There is no calm resolve.

The candlelit vigil and statue at Oliver's funeral makes me want to puke. Lance has to apologise for doing his job. Oliver was not a good man. Lance does a stupid speech. This was verbose yet content free. Oliver didn't fix his father murdering the other man on the raft. Thea and Emiko chat – they aren't related! Moira is nice to Emiko. Tommy and Black Siren chat. Tommy's shaved off the beard and he married Laurel! So Oliver didn't steal her in this post Crisis world.

How did Laurel die? Much has changed since 1x01. Talia and her sister show up. William is barely acknowledged at the funeral. Barry's there. Why didn't Oliver undo the death of Tommy's mom and William's mother? Kara and the Russian are there. Dinah bikes down Oliver Queen Memorial Drive.

Felicity ditches Mia and William to spend eternity in a crappy looking afterlife with Oliver. Selfish to the end. Diggle does Oliver's eulogy. It should have been Tommy – his BEST FRIEND! Sara Diggle is back and Diggle has an encounter in a Green Lantern homage. This was unchallenged crap.

“Killing him is justice.”

“A new generation of heroes.”

“We buried a casket full of momentos.”

“Take that mission to the rest of the world. Maybe even beyond that.”

“Brought heroes into the world.”

“Where I'm taking you. There is no return.”

There is a lack of discipline or resolve. People are vindictive tools and this final ever ep was umimpressive. There is pain, despair, fury and vicious and overwhelming hatred. Dillion is told the truth again. People end up in the hell they made. The bad guy does unpleasant things. This was unremarkable and an utter bore.

This is a dreadful warning of how a show can go downhill. There is death and a baddie kills his own daughter with a screwdriver. Mercy is out of the question. The world won't miss these people. Brad's words are poison. Nutjobs are pitiless. There are no moral concerns and will someone kill Brad already? Nobody has integrity. Assertions are made and 1/2 this ep is idleness.

There are too many negative associations. Kiera thinks she's god's will made manifest. There is chronoflow and the currents of fate have their own plan. There is desolate cold and inflexible rage and more death. Kiera heads back to the future. Why isn't Brad dead? Carlos and co plan to build a better future. The bad guy is dumped into the distant distant past. What'll become of him? Kiera is home and exposition flies.

Old Alec greets her and there is no Liber8 and no bad future. This was really bad. There is a memorial park for Carlos. Alec married Emily. Kiera sees her son Sam but there is a but. The new timeline's Kiera is his mother. Kiera has to held back and cries. All for naught! Julian helped build the better future. Actions figures move by themselves and the price for changing the future is that Kiera can't be with the son she has been trying to get to since 1x01. She cries. It ends.

“Treated in a manner defitting your importance.”

“Screwed up my life.”

“A barbaric and uncivilised age.”

“Made a better world.” 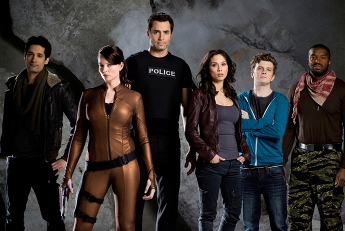 Dee Dee and Gypsy have an insular relationship. Dee Dee counts money and men show up. Gypsy dresses up as Belle but Dee Dee makes her change into Cinderella. Why do they go to the cons? Dee Dee is the greatest shame. She lies to Gypsy about her age. Gypsy's baby voice annoys. Dee Dee gets a man friend as does Gypsy.

This was appalling with no functional relationships. Gypsy is dumb. This was not fascinating or disturbing. Dee Dee has hysterics and causes indignities and inconveniences. There are terrible secrets and Gypsy looks at fan art and gets a phone. Gypsy and Dee Dee have a shared Facebook account. It is 2011 and Gypsy is defeated and subjugated. Dee Dee undermines and withholds and pretends to be impeeccable. Gypsy is property. This was grubby horror and Gypsy is 19 and this was nigh unwatchable.

“Take me far away from here to someplace really special you know, like Arkansas maybe.”

It is 2013 and Dee Dee gravely intones and gaslights. This was not remarkably effective. There is no rational functioning and no just no. This was morally polluted. There is domestic unease and I turned this off about 5 minutes in.

The crew meet an organic starship. This has dated vfx and is dull.