This show needs to kill off Sophie. She's just awful and given to brutal slights. It's been a few weeks since 1x01. Tyler bores. Sophie is an emotionally trying liar. Kate chats up a blonde bartender. Jacob is not insightful or erudite. Alice plays the cello and the evil stepmother needs to go. Tommy and Bruce were BFFS? This was mmm.

Kate suits up in her red detailed suit. Where did she get the wig? Ruby Rose looks great and very comic accurate in the suit. How does the wig stay on? Tommy is lame.

“Your batsuit knock off.”

“I want Batman not his sidepiece.”

“I won't let you forget me Commander, not again.”

“The villain of your story be the hero of your city.”

“Kick his ass on your behalf.”

“Taking you to Arkham Tommy. Good luck buying your way out of that.” 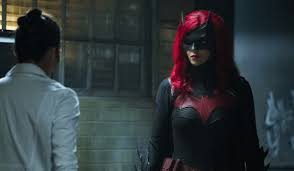 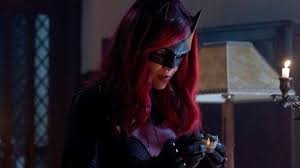 The Enterprise C emerges through a rift in time changing history. The Enterprise D now looks better with better darker lighting and snazzier uniforms. There is no Worf or Troi. Why is Guinan still there? Guinan and her never explained powers knows something is wrong. Tasha Yar is back.

The new layout of the Enterprise D bridge is far better. Picard has over confidence in his own righteousness. The Enterprise C was meant to be destroyed defending a Klingon outpost from 4 Romulan warbirds 22 years ago. The Enterprise C agrees to go back in time and set history right. They took on 4 warbirds!

So the UFP/Klingons were still working on the peace treaty 22 years ago? What about 'The Undiscovered Country'? There are 6000 troops on the Enterprise D. Tasha has a differnt hairstyle. Hair gel must be a requisite. 40 billion have died in the war. Picard bellows. Only rations called TKLs are served. Tasha gets a boyfriend from among the Enterprise C crew.

Of course the female captain of the Enterprise C is disposable. What is a time rift? This was okay. Tasha Yar learns of her stupid death in 'reality' so goes back in time with the Enterprise C. But she didn't die with the C and ended up on Romulus and had a half Romulan daughter: Sela. Riker dies, Wesley is a child solider and the Enterprise C moves very very slowly back into the rift. The D's bridge goes on fire. Luckily all is well.

“Where and when they are.”

“Alter the flow of our history.”

“A federation starship rescuing a Klingon outpost might have averted 20 years of war.”

“1 ship could have stopped this war before it started.”

“I'm not seeking your consent.”

“Weren't meant to know each other at all!”

“This is not the way it's supposed to be.”

“Far worse than is generally known.”

A doctor sees through Dee Dee. A social worker visits and Gypsy is drugged to prevent questions. Dee Dee has Gypsy's teeth taken out. Dee Dee makes it all about her. This was BAD. Gypsy is an idiot.