Jessica Walter, Clint Eastwood and Donna Mills star in this stalking drama. Eastwood's horrible costumes receive a special note in the credits. People have big poufy 70s hair. There are pretty scenery shots, endless shots of roads and scenery and Eastwood's car. This is a cultural artefact of the pre MeToo era.

This is set in Carmel, I've been there. Eastwood not only starred in this – he directed it too. Eastwood plays a DJ named Dave whose affection is not hard won. You've no idea why or if he's happy and he faces terrible resprisals from a fan. Dave is seen as a decent member of the community – yet is never depicted as anything other than low-key menacing.

People talk to him in reverential whispering. There is no sense of foreboding just flares, cheating and sexism. Dave has a one night stand with Evelyn – he doesn't stay for breakfast after boning her. Dave has moral indignation and annoys with diligence as he finds Evelyn won't leave. She wants commitment.

Why is a barman acting as Dave's messaging service? Evelyn is a nutter. Why does Dave have poetry on his show? Dave shags Evelyn again and she goes crazier. There are tape reels. Rejection is taken badly and Dave shows off his nips. Scenes are made as Evelyn goes full throttle crazy.

Dave expresses dismay at Evelyn's declarations of love and wants to get back with his ex. Evelyn demands that Dave love her and he has no intention of doing so. Nobody seems to find Evelyn's actions (like self harm) inherently worrying. He's not without blame. Evelyn tries for 'terrifying hideous rage'. Dave lives in seclusion.

Evelyn is all: I belong to you, I'm yours but is emotionally damaged. Evelyn is not extremely menacing but does not cause mounting terror. Evelyn is absolutely distraught that Dave doesn't love her. Dave does frequent cruelty and reacts with fury and has austere dominance. Evelyn's unstoppable. Nobody has heightened concern. People mumble unintelligibly. Dave is miserable at her cruelty and misery and has distain.

Evelyn's volatile and the more she demands affection and gratitude, the more Dave resists. This film is insufferable. Evelyn utters low hows of despair in raging defiance. Dave has horrified shock as Evelyn takes joyful revenge and makes threats. This film is not an improver of life. There is no unimaginable distress or bitter regret. This is a downbeat experience. People are unconcerned. Evelyn finds what is precious to him and threatens him with losing it.

Intention counts. Poe is quoted and there is fake blood. Dave is barbed wire in human form. Dave manhandles Evelyn in public, tries to appease her and she stabs his housekeeper. This was not effective. Evelyn wants to achieve his destruction. The cops mock him. Dave lies. This was not very elevated or intelligent. There are dysfunctional choices and nobody behaves their way to success. This leaves you exasperated. A music festival is seen. Finally Dave punches her out of his house, through a window, off a deck and into the ocean.

“He left me payments.”

“This is a later time pussycat.”

“Hack up your wardrope and your cleaning lady.”

“That's picture's got nothing to do with you!”

“Get off your back? That's where you've been keeping me!”

This forgotten horror is effective. An old polaroid camera is haunted and whoever has their photo taken with it dies. This has a vintage look and is good. There is no civic engagement and no responsible language.

This was on the shelf since 2017. A 'Riverdale' star plays the dead star walking. This tries very hard to be a serious contribution to the horror genre. A yard sale sees the cursed polaroid move on to a new owner. Also film comes with the camera. People die after being photographed.

This film went largely unremarked. People just wander into each other's houses. The heroine is named Bird but people call her scarf girl. Mitch Pileggi >spit< is in this. There are barely any adults in this film.

A shadow appears in the photo. There is a killer sheet and evil unassuming junk. There are causative agents, self-absorbed teens and a useless cop (Pileggi) lurks. Evil hands lurk and there is death. There are emotional appeals and Bird rants about her evil camera and there is rapid proof that she is right. There are flashbacks, an obvious twist and then another twist. There are lies, people hiding in the shower from the ghost killer and Grace Zabriskie. This was good.

“They don't even make them anymore. They made them for a couple of years in the 70s!”

“Pics or it didn't happen.”

“What are you dressed as?”

“Not a magic camera.”

“Submit that sh*t to CreepyPasta.”

“I think if it takes your photo, you die.” 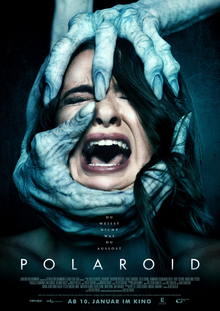 Idiots babble. This was okay but these people's first world problems are no concern of ours.

“Last time I saw you, you were hiding in the bushes.”

“My ex-friend and nemesis.”

“I wish all bad things on you.”

“Force affection onto me.”

“The world was changing and her kind didn't have anywhere to do.”

Tom Berenger and Ernie Hudson stars in this action film that spawned 3 sequels. This looks 80s. A school is full of gangs and the Vietnam vet turned mercenary pretends to be a teacher in the school. This was violent, crass and full of constant swearing. He runs around the school in his vest with a gun and throws students out a window. This was crap.

The sequel nobody wanted! There is mumbling and a stripper reunion. Why is Kevin Nash in this film? He can't move! A stripper rubs his shirtless self around a store – I'm amazed the clerk didn't mace him and call the cops. Channing Tatum's girlfriend from the 1st film who can't act is gone. There is sleazy dancing. This was okay.