The best (and only good ep of this season so far). Andrea works for Leviathan. This season has been atrocious and disastrous. Lena has had a challenging and traumatic life. Andrea tries to 'rescue' someone. Flashbacks show Andrea and Lena's friendship. Lena has a resentment that seems very dangerous.

People have dark purposes. Alex wears a spy catsuit and is a twit. Andrea stole Lena's boyfriend and was a liar and a bad friend. There are unpleasant events. Andrea connives at cruelty. Lena has sinister intentions and lingering ill feeling. Andrea and Lena bonded as teens at boarding school over 'Titanic'. Where was Roulette in the flashbacks?

There is a Lord industry mention. Andrea and Leviathan ruined it. Argentinas speak English. Lex and Lena had a falling out over Superman. An uncredited Jon Cryer makes a cameo. Steven Bauer is caked in fake tan as Andrea's depressive loser dad. Superman only emerged 5 years ago.

Rip Roar is a stupid bad guy name. Rip Roar dies. Andrea learns her super-powers came from her being inherently evil. This was good. Now that he's gone bust – where is Maxwell Lord?

“If I don't help you murder Superman you're firing me?”

“In desperate need of a worthy adversary.”

“Our friendship was the curse.” 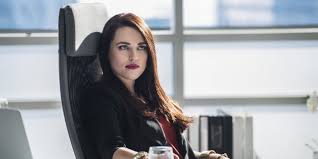 Monks eat well. Adso is suspected. There is mumbling. Adso shags a woman. There are menacing people and people debate. WTF is going on? Monks fist fight. There is glowering, self harm and weirdness. Abuse is overlooked. This is so bad.

“Stink of the devil.”

“They're exceptionally protective of their mother.”

“With good reason in your case.”