Episodes 1&2
Barbara's in jail and her cellmate is an aggressive chav named Donna. Barbara soon establishes herself as topdog by smacking Donna around with a bar of soap in a bra. Meanwhile Jeremy hosts a visiting group of policeman from five hell hole cities around the world who want to see the crime free Little Stempington for themselves. The American cop (from Miami) soon sniffs out what is really going on.
Meanwhile a visiting male ballet troop demand asylum. Camilla soon sets them up in a vice ring operating out of the sheds at the garden centre. Joyce who is leading (badly) the good housewives decides to put a stop to that. After all one can't have asylum seekers hanging around Little Stemington looking swarthy can one?
This was okay. But it lacked a certain something, it lacks the daring fizz and nasty dialogue of series 1. Instead of being funny, most of the characters just come across as jerks.
Best Lines:
"Do you think it's all those unstable nuclear power stations that are responsible for their unfeasibly large codpieces Sir?"
"Loverboy costs £200 an hour. If you like them even bigger, try Yuri in Shed 4."
"Can I put it on my Switch card?"
Episodes 3&4
Camilla is out for Joyce's blood after having her asylum seeker vice ring shut down. So she lures Jeremy to her house for a problematic revenge and an enraged Joyce beats the snot out of Camilla.
Meanwhile Barbara and Donna are paroled and head to Little Stempington. Jewel fails her audition for drama school despite performing a monologue from 'I Know What You Did Last Summer'. Hilary drugs the local Independent MP and films him cavorting with rentboys so he can be blackmailed into approving a super-casino to be built on Little Stempington's Wetlands.
This was okay. The new heavy the corrupt Miami cop Rodriquez is even more unbelievable than series 1's French druglord and Camilla being evil at 15 doesn't tie in with the back-story revealed in series 1. This series just isn't as good as series 1, the violence and the nastier tone aren't helping.
Best Line:
"Peddling cheap housing to idiot poor people."
Episodes 5&6
Series 2 comes to an end as the groundbreaking on the site of the supercasino leads to the body of a burglar Barbara and Camilla killed two years earlier being discovered. Donna who has been initiated into the good housewife gang is assigned the task of stealing the body, which she does only to learn the body is that of her beloved brother Daz. This causes Donna to erupt into murderous psychosis and she kidnaps Barbara and Camilla to enact some vigilante justice on them.
Meanwhile Joyce who has gone loony manages to achieve something: the good and bad housewives team up to take her crazy ass out. However Joyce manages to triumph over them but her moment of glory is spoiled when she learns Jewel is pregnant with Bill's baby.
This was okay. Seriously though the ongoing Bill/Jewel saga is tedious - despite the fact RUTH WILSON plays Jewel and TOM HIDDLESTON plays Bill. Who knew the 2 big stars to come out of this forgotten sitcom would be Bill and Jewel FFS?!? What became of Officer Rodriquez's body? Joyce is an utterly uninteresting character now. And how does Jeremy not notice there is a rotting corpse in the deep freeze? And so it ends, no series 3.
Best Line:
"Keep a lookout for posh bleeders."
"I didn't want to go to the police station in case they didn't let me out."
"Death by trailer trash!"
"Confeshon from evul posh cow." 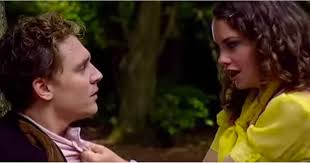