June and co are in Washington DC. In the book and so far in the tv show: Boston is the HQ and heart of Gilead. So why are they in DC? In DC, Handmaids mouths are sealed. This has no narrative drive. Serena Joy is all dour faced cold calculated great silence. There is no great sense of plot or pace. There is emotional violence. A new Commander (Christopher Meloni) shows up. June's obvious intensifying resentment makes her particularly unpleasant and profoundly disliked.

The new Commander has 6 children (some obviously stolen). How does he have so many? June gurns and does wilful violation of common sense in a perilous city. There is no narrative drive. Fred seems ever more unneeded. How do the Handmaids with sealed lips eat and drink? Why are no Handmaids pregnant? June has plot armour. Why isn't she dead? There is performative piety and June has wilfully ignorant intent.

Nick shows up. Why do the Gilead lot never mention Jesus or go to church? What is that scar on Nick's forehead? Why hasn't Fred been assigned a new Handmaid? Serena Joy's promises are hollow. June categorically refuses to comply. Does she have pathological demand avoidance? June should be under permanent scrutiny and in unkind conditions. The flag of Gilead is seen. Where are all the Econowives? June is unencumbered by sense and has an outright refusal to be smart. The anger in her face is obvious. She's surrounded by mortal enemies and has no sense. It's utterly perplexing why TPTB keep her around.

June learns Luke turned over the tape to the governement. Luke is a tool. Canada wishes to avoid conflict with Gilead. Canada wants info on the black box that is Gilead. The Canada lot won't listen to Nick because, reasons. FFS. This ep causes no ferocious excitment. Canada describes Nick as a war criminal. I roll my eyes. This was not captivating or morally fascinating.

The new Commander is named George and he hits on Fred. Why hasn't Nick been assigned a new wife or a Handmaid? George has quiet menacing confidence. George's wife loved Serena Joy's book. George and his wife were once corporate lawyers. It's taboo to discuss Serena Joy's book now. June stares. Nick can just visit June with no serious consequences. Fred has no guile or manipulative skills.

Nick doesn't seem overly concerned with his child. It's starkly evident TPTB are making it up as they go along. So much is underexplored in this show. The Swiss can't be trusted. The allegations about Nick make no damn sense. He got in with the Sons Of Jacob because he needed a job and then he was a driver for Fred. June seems to think Nick is a war criminal now. Oh FFS.We see soliders (are they called Angels are not on this show? I forget) jump to attenton for Nick. I roll my eyes.

This show makes no sense. Aunt Lydia aka the only Aunt in Gilead lurks. The punishingly stringent Gilead doens't punish June – she's unaffected. Enjoyment occurs no more. In the most memorable sequence in this ep: we see the Lincoln Memorial has been defaced and that the Washington Monument has been made into a cross.

“They don't stand for disorder.”

“How did he serve Gilead?”

“He was a solider in the Crusade. We wouldn't be here without him.” 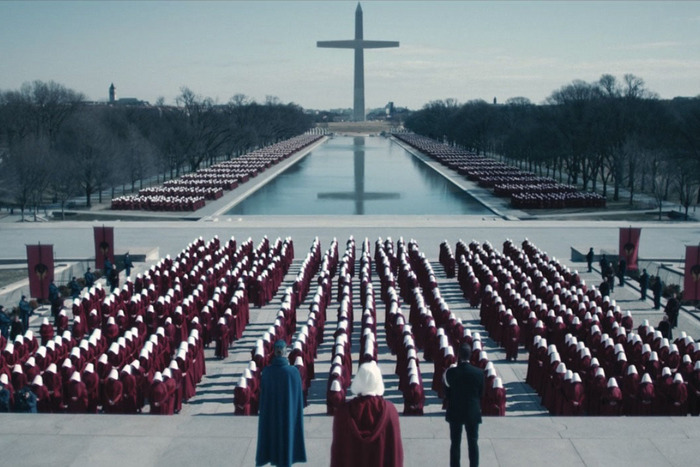 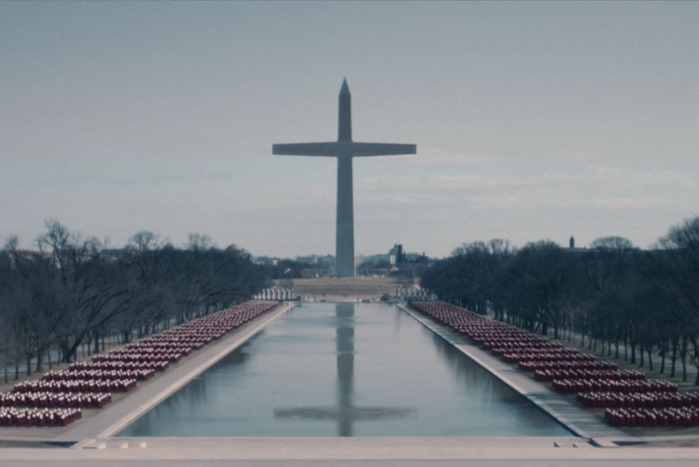 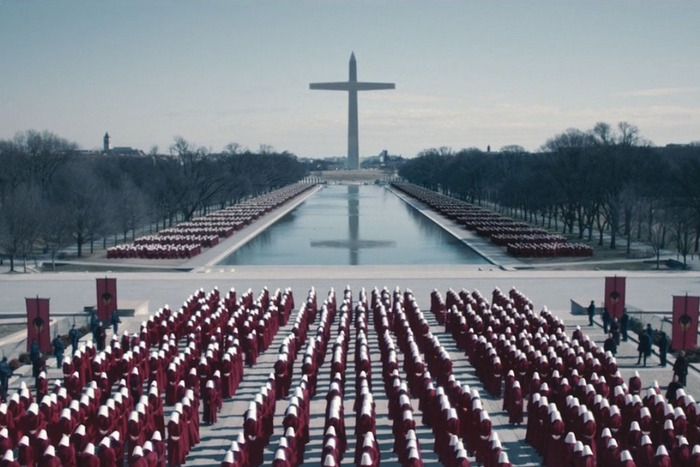 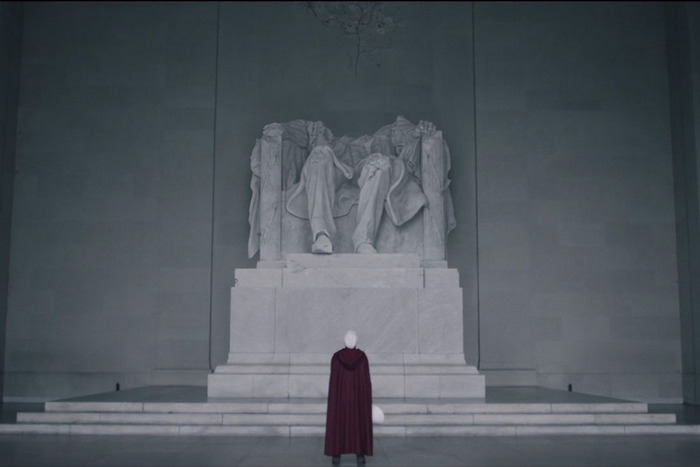 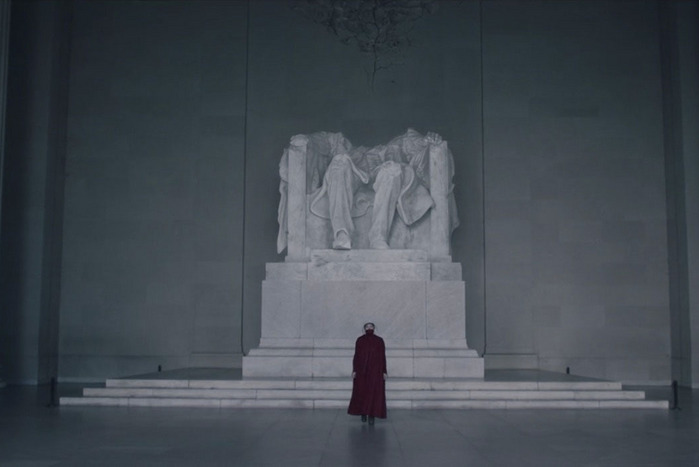 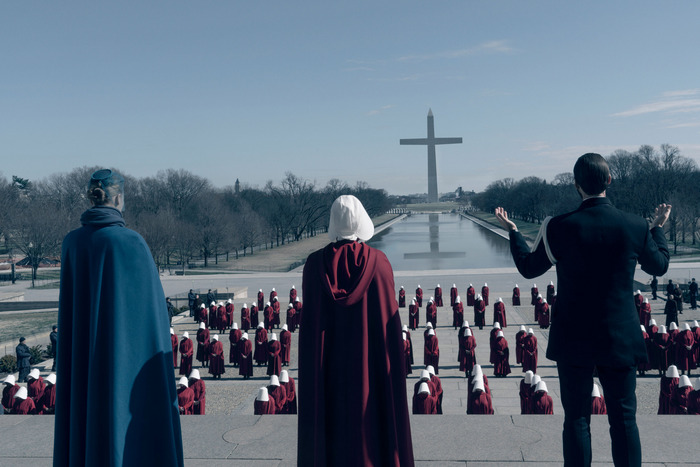 In ep 6 of 6, fleets face off as the UFP aims to retake DS9 and the wormhole. O'Brien and Bashir start reciting poetry on the bridge. Why do the reptilian Cardassians have human teeth? Dukat cares about Ziyal. What about his other posse of children? Quark, Kira, Jake and Leeta plot. Damar is a thug. Where did all the Dominion ships around DS9 go? Dukat's gimp suit looks uncomfortable.

A guard faceplants in souffle. Quark takes out 2 Jem'Hadar. Dax's hair gets mussed and then is perfect again a scene later. The minefield is destroyed. Sisko comes up with a plan and asks the wormhole aliens for help. What became of the Dominion fleet that the wormhole aleins sent away? The Dominion leave DS9 and Dukat loses his mind and then Damar murders Ziyal which leaves Dukat babbling and curled up in a corner. Sisko's fate is foretold. Sisko pities the mad Dukat, which wouldn't last long. This was okay.

“Head for that opening. Anyone who gets through doesn't stop until they reach Deep Space Nine.”

“A true victory is to make your enemy see they were wrong to oppose you in the first place.”

“He will find no rest there.”

“I could never figure out why.”

There is violence against women in the first 5 minutes of this time travel drama. This was al mundanity with no challenges or tensions. This tries to be socially conscious by haivng a junkie in it. This was not fearless and it had no stark images. This was terrible and not emotionally devastating. The annoyance from 'Will & Grace' is in this as is Teryl Rothery.

People from the future do mental time travel. One ends up in a new mom with an abusive ex. This was not utterly charming. One ends up in a high school student/MMA fighter. The MMA guy has a bimbo girlfriend. This was ludicrious and not intriguing. There are messages on the Deep Web. An FBI agent looks into weirdness. One timetraveller ends up in a woman with an intellectual disability. People are stunned that she can suddenly talk and read. Her caseworker rants.

This was nto engaging or high stakes. There are no inventive thrills or artistry or imagination and this was not genuinely unexpected. A dodgy lawyer lurks. People from the uncertain future gather. This was incompetent. This causes disengagement. The characters seem like the biggest a-holes who ever lived. This was unsuccessful.

This was uniformly grim. The city seems sinister, unsettling and threatening. This was not absolutely compelling just sheer stupidity. This was authentically terrible. The violent ex is a cop. Why is humanity nearly wiped out in the future? How do they know when people died? The FBI agent is part of a twist. What happened to the FBI agent's real personality? This was ridiculous. What ruined the Earth? This was ludicrous. The junkie lets people die. What a jackass. This was an exasperating fiasco.

“Stay down man, he's better than you.”

“Making people look after her.”

“Live in a flophouse full of crackheads.”

“I've important work to do.”

“A mistake's been made.”

Who were the great sages? They didn't do nothing! A disease strikes. The sisters bitch bitch bitch bitch bitch. Hunter has been vanquished. Parker is going evil. The sisters are the c word. There is death, because. The Source shows up. Parker legs it. This show gets worse and worse. I'm hate watching it at this point.

~
The Trial Of Jim Gordon

Lee shrieks. Gordon is shot. Bruce bores. Jim hallcinates in a plot 'Earth Final Conflict' did in the 90s. FFS. Ivy shows up to bore. Catgirl beats up some gimp with sharp teeth. Why are they wasting time with this crap? Lee and Gordon marry.