Movie Reviews: Avengers: Endgame + Everybody Wants Some!! + Ghost In The Shell 😁😁😁😁😁😁

This was good, far better than the dreadful 'Infinity War'. Half the universe has been wiped out. The surviving Avengers band together to undo it via time travel and violence. But where did the flying horse come from? Thor is fat and Clint Barton (Jeremy Renner) finally shows up having lost his family, got a punk haircut and a sleeve tattoo, learnt sword fighting and turned into a badass vigilante who massacres people.

Captain Marvel has a new haircut. Tony never apologises for any of the crap he pulled. Almost everyone makes an apperance (not the snotty Martin Freeman though, thank god). Oddly Sharon Carter isn't seen or mentioned.

Clint Barton does grief and furious anger. There are space stones, stuff blowing up, Jarvis, Hulk jokes, emotional responses, fighting, Loki and restoring the loss is a motivating force. Are Spiderman's friends now 5 years older than him? Why is he still at school? Is T'Challa still king? This isn't intellectually challenging but it is fun and makes you forget the dreck that was 'Infinity War' and there is a hilarious bit listing all time travel centric media.

“Go to sleep or I'll sell all your toys.” 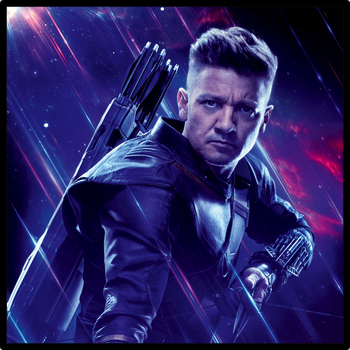 In 1980, badly dressed frat boys are boars. Tyler Hoechlin of 'Teen Wolf' and 'Supergirl' stars. This was undramatic and dull as hell.