The Nest by Gregory A. Douglas

This 1980 horror has been reprinted. It is a tale of mutant killer cockroaches that breed in the rubbish dump of an island and escape to eat people. There is casual racism, rampant sexism, toxic masculinity, men who don't listen to women, purple prose, a badly written sex scene, a morbid terror of punks who smoke pot, slacks, the force of cirumstances and the will of providence. Also there are roaches eyeing people with covetous eyes and ever more grimmer scenarios. This was enjoyable pulp horror full of trauma, ferocious roaches who are societal ills, disquiet, slighted and disrespected women and an ending that hints at far reaching implications. It is mentioned in a throwaway line that the island's population were sent off in evacuation ferries. But why don't the 'heroes' tell anyone about the roaches, the dead people or the fate of the sunday school picnic?. Also what is milk glass?

“I was in Vietnam and God knows I never saw anything as awful as this!”

“Destroyed to the last miscreation,”

“The roaches are in the graves!”

“My God, the roaches are here!”

“The life they could never now have together.” 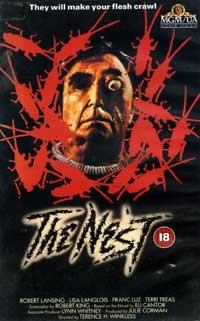 Tags: book review, buffy the vampire slayer
Subscribe
Comments for this post were disabled by the author