Three klingons from the 'TOS' era guest star, played by the original actors but with their makeup updated to the then present day klingon look. There is no intensity just trust issues. Kang, Kor and Koloth stomp around the station being mournful over the bad guy The Albino. Dax knew the klingons when she was Curzon Dax. She doesn't ask why they have ridges now.

There are moral stances. John Colicos and Michael Ansara guest star. Damaging words are uttered. The klingons recall slaughtering people in battle back in the day, which takes on ugly new signifigance with the advent of 'Star Trek Discovery'. Dax whines about an 80 year old blood oath Curzon took with the klingons to kill The Albino.

This was saliently depressing. There is emotional debate as Jadiza Dax decides to head out and kill The Albino. No wonder Ezri Dax sniffed at Jadzia's klingon obsession. The klingons have obsessive hatred for The Albino and have unshakeable will to kill him. This was dull and does not have a profound impact. The Albino is ill favoured and doesn't deserve mercy in Dax's eyes. Dax is personally compromised and this was forgotten in the Ezri aka tinkertrill era.

There are no searing words. People react abominably. Klingons blather about decades of blood soaked history. There are no dark manoeuvres. This was not unflinching. Dax has self importance and she annoys and she is shallowly stubborn. This was not fraught with ambiguity.

This ep has no deep sense of purpose. There's a twist and a cut rate battle and people conducting intrigues. The joined species aspect of the Trill is public knowledge. This was tedium and The Albino fortuitously dies as do two of the old Klingons. Dax and the surviving klingon do no open eyed howling at the deaths.

“Ears that reach across the galaxy.”

“The old Klingon ways are passing.”

“Come and be damned.”

This was tedium as people without ethics blather. This was done ineptly but with earnestness. This was not fascinatingly complex. People wander listlessly from scene to scene. People are ungrateful and does not build tension. There is no unapologetic nihilism just banality and ecstatic vacuity. There are paranoid delusional beliefs. Various social and cultural forces are at work. A man is notoriously unrepentant. There is no profound emotional investment. Working women are laughed at. This was not compelling and things continue inexorably along a grim path.

“Tears are so weak.”

“Will need and have earned your attention.”

“Not draw negative attention to themselves.”

“Tidal wave of interest in communism.”

“Your men are coming home.”

The Red Angel is someone form the future. Tilly babbles. What anamoly is she on about? Pike does know about Ash being Voq. Michael is on Vulcan. Pike is a purveyor of awfulness. Tilly is unconcerned with logic. Sarek and Amanda's house doesn't look like what you expected. There is a flashback to little Spock. Michael has an obsessive relationship with him. This was emotionally inert and lacking in emotional charge. Spock is not Michael's brother! Amanda has a negative attitude.

There is a time rift. This causes commensurate disinterest. Section 31 killed Michael's parents! WHY? Spock (Ethan Peck) lurks. There is a 'TOS' homage. Pike spews chastisement. The Red Angel has driven Spock nuts and he babbles about Talos IV. Spock had a learning disability. One feels amused distain for this. The Emperor killed her mother. Why is the Section 31 doctor wearing a clear plastic raincoat?

Sarek seems not to care for his family properly, or at all. This ep is not a vista of opportunities nor is it innovative. Spock's in significant distress. Pike and Ash are in a shuttle that falls into a time rift. The shuttle has external shielding. There is a Michael/Emperor catfight. Section 31 is unfeeling and the Red Angel better not be tied into the Temporal Cold War BS. A probe has inscrutable malice. The robot woman is affected. Ash is nobly suffering. Michael's overwhelming devotion is sick making. Season 2 is miserable times. This was false promise. Pike has undisgusied contempt for Ash.

“I accepted this life.”

“Do not over-estimate your value here.”

“Fight for the future.”

I wish Aunt Harriet would piss off. Even as a kid, I HATED her. Bruce wears a hideous cardi. There's a bank robbery and Batman does fake news. Zelda wears a fox fur stole that would show up again in 1x15&1x16. A death trap has a huge padlock. This was okay. Zelda is a magician with the stain of disrepute and evil intentions. Aunt Harriet is kidnapped. KEEP HER! This was okay.

“Holy hole in a doughnut!”

A Death Worse Than Fate

Robin describes himself as Batman's aide. A cut price Omar Sharif plans to rub off Batman. This was okay. Robin stands up in the moving batmobile. If Robin slides down the Batpole while in costume, what happens? We don't see. The ending is silly. This was okay.

“Out on a yacht eating sherbert.”

“We don't wish to undermine that little remaining faith you might have in organized society.” 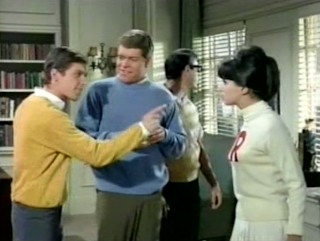 2 wrestlers rip their own lives apart and become cops fighting crime in this failed pilot. Roddy Piper and Jesse Ventural star in this rubbish that does not tantalise the imagination.

A priest hangs out in Oz, getting very attached to a young girl. Bogans are sexist and violent. Oz is a godforsaken hellhole. There is a LOT of sexual weirdness in this film. This caused a fuss due to the priest having it off with a woman but everyone overlooks that he first met said woman when she was TEN. This was CREEPY, seriously did TPTB not see the creep factor?!?