The cop is on to them. The cop wants the husband to kill someone. This show is improving.

“What reaction are you hoping for right now?”

“Will you be my friend?”

“How ever will it resolve?”

~
The Joker Is Wild

This show was inexplicably discontinued after 3 years. A sign in Gotham State Penitentiary says: Law Books for Hack Saw. A softball game sees the Joker literally spring himself from the pen. Joker wears his clown makeup in jail. Dick wears a vile orange pullover. Cesar Romero prances and cackles as the Joker. The GCPD continue on their lamentable, memorably disastrous way. Robin has fans and is heartbait.

Adam West gazes meaningfully into the distance. Joker's stunt double is momentarily visible and his hair is brown in one scene not green. This was okay. Joker has utility belt envy. People in bars watch opera. Dick Curtis has a cameo as a hilarious inebriate.

Joxer's teeth are yellow and his hair is brown. Robin is shorter than Alfred. Burt Ward's stunt double is seen. This was dull.

“We only have so much to give.”

Mr Freeze shows up (his name is not Victor Fries) and he can only live in temperatures below 50 degrees. Mr Freeze is chilly mcfreeze and played by George Sanders. Mr Freeze is German. He's not doing what Arnie or Nathan Darrow did. Alfred is as orange as George Hamilton. There is a giant lighted lucite map of Gotham city in the batcave. The duo get frozen in an adverse incident. This struggles for purpose and is imaginatively barren.

“No wonder his mind is warped.”

Batman and Robin are thawed. What about the other frozen people? A baseball player is in peril. This boxset came loaded with expectation. I can recall watching this as a kid and loving it. Batman is indomitable and he inspires hostility in Mr Freeze. Robin is resolutely determined. The uncivil Mr Freeze has dubious hospitality and does malicious actions and he has stony indifference and is portentous.

Batman preaches the wonder of super thermal long underwear. Batman and Robin give Mr Freeze fight. Robin meances a guy with a
stuffed polar bear. There is no depth or meaning or abundant possibilities. Mr Freeze does not pose a terrible threat. Aunt Harriet offers Dick and Bruce Baked Alaska (shaped like boobs) which they look amusing disgusted by.

It's bizarre how Robin has absolute loyalty to someone who puts him in life-threatening situations with troubling regularity.

“Do with me what you will.”

“Protector of our city.”

The Joker Goes To School

People want Bruce to run for Mayor. Bruce wears a HIDEOUS jacket. Joker's out of jail. WTF? Batman has enmity for Joker, who as usual has the worst intentions. Dick is president of the student council and wears the hideous orange pullover again. Chief cheerleader Susie stirs the pot. Bruce breaks out the bat loudhailer.

Batman rants upon the graver moral problem of high school dropouts and gives a slideshow. This was excellent. The Joker lurks on school property like a dirty old man. There are ugly suspicions and an awful situation. Batman ramps up his level of vitriol. How does Dick travel to and from school? He's 15! Susie fancies herself a badass. Dick goes on about pre-college exams. Robin does more leaping over car doors. Where does Robin keep a batarang in that outfit? There is a deathtrap.

“That most pestilent of predators.”

“You're the ward of that rich millionaire.”

“Another machine has gone mad.”

“Student morale is cracking up.”

“You lowlife, get away from me!”

“What an odd parting remark.”

He Meets His Match, The Grisly Ghoul

Robin is sad over Susie who he still fanices despite the fact she helped the Joker try to horribly murder him. Bad kids hang out at a candy store. Dick pretends to be 'bad' which he shows by wearing proto flares, a leather jacket, black leather gloves and a shirt with TWO buttons undone. Susie does a hilarious shocked face at the sight of him, she's wearing her tacky fox stole and rhinestone braclet.

Dick is hilariously inept at being 'bad'. The school has only 3 cheerleaders. Joker's hair is brown. Dick has questionable abilities as a bad boy. Joker plots to ruin the basketball team with devastating allegations of cheating. The batshield debuts. Where does Batman keep it? He invented kevlar!?! Joker's whole scam is based around a basketball game wager. The duo won't go into the women's locker room. Susie is poisoned and discarded by the Joker. Susie's off to reform school. Dick extolls the joy of a school for deliquent girls and carries her bags to the chauffeur driven limo taking her there. She tried to murder him! This was okay.

“Never had a weed in his hand in his life!”

“Discard you without mercy.” 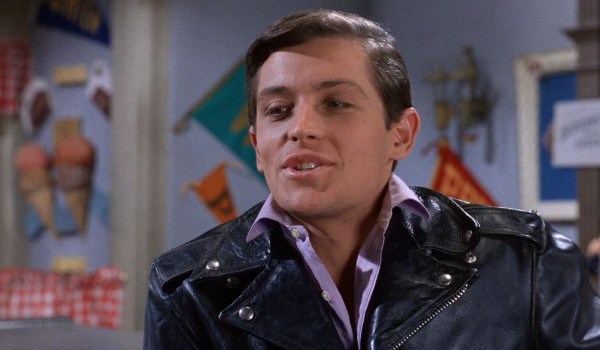 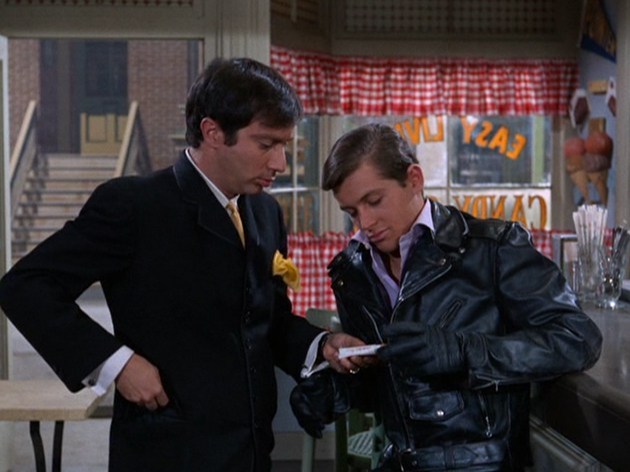 ~
The Flash And The Furious

Star Labs satellite created new metas and meta tech? In 2049 – Reverse Flash (wearing Wells' face) is in jail and is allied with Nora. Cisco looks bored, Snow is made up like a hooker and the latest Wells' has a silly accent and Iris wears a very short skirt. Wells looks into Nora and her lies. The city tries metacrime. Barry does something stupid and selfish, again. Nora is thick.

Cisco discovers a metahuman cure. Weather Witch is asked by Silver Ghost to rob ARGUS. Barry babbles about chrono-linguistics. There is a car chase and this was boring.

“Changed the course of destiny.”

“Stop with the sorry act.”

~
Night Of The Tarantula

There is voodoo in Jamacia. John Rhys-Davies runs a plantation until the heir Adam (Patrick Masset – who only seems to have ever had 3 acting jobs) comes of age. Davies is racist and plans an arranged marriage between Adam and the daughter of another plantation owner. Adam's brother Mark has an Irish accent for unclear reasons. There is reggae music which people are amazed at. Adam marries the daughter of a voodoo priest.

There is bad acting. Davies is strangled by a snake. Or is he? There is more bad acting in this magnificently ridiclious ep. People fake Adam's death and his apperance as a zombie to make the obvious baddie reveal himself. This was so very 80s.

“The grave cannot have him.”

A demon dad and his demon sons go on about a serum. One of the sons is Hunter and he's a full demon and the other is half-demon and is Parker. Who is Parker's mother? This seems icky. The demon dad runs Morningstar Biotech. Demon dad is named Kaine. The demon clan barely have any personality.

Rogue witches run around. One of them is a half witch/half whitelighter. The Elders are jerks. Will the actors stop mumbling!?! Hunter feels Parker up in a lavatory. Their dad is 3000 years old. This was generally awful and beyond a terrible failure. I have all the enthusiasm you could expect – absolutely none. There is a bug and an undercover plot.

“Feelings are for people.”

The Illusion Of Truth

The Shadow war is over, talk about a non-event. Zack heads security now. ISN shows up on B5 to do a story. The B5 staff are aggressive and violent and dumb – ISN doesn't have to work hard to make them look bad. The telepaths are still in cyro tubes. Where's Lorien? The reporter (Jeff Griggs) looks like Morden. What's hypertext?

Garibaldi annoys. Sheridan is AWFUL to Garibaldi. Londo whines, why wasn't he arrested as a war criminal? How is there sushi on the station? You can download a transcript of the ISN show but not the show itself. What's a trivid? There are unsubtle references to McCarthy. In 2018 – the foundation for the Luna Colony was laid in the Sea Of Tranquility. Ha! Garibaldi speaks freely about Sheridan's god-complex to ISN. This was okay.

“One day return to society.”

Rob Youngblood of 'Space Precinct' guest stars in this contrived narrative. There is bad VFX and giant worms and bad acting and vapidity and people wrapped in clingfilm in this mess. There are no tragic secrets awaiting discovery. A small town fearfully worships a worm. There is a town full of people with recalcitrant behaviour. There was a US/Canada border dispute. There is social failure in this town.

The locals do stuff without fear of repercussions. Why is Wade a redhead? There is exposition about a fountain of youth. There are no moral principles just derangement. Youngblood looks bored not redolent with evil. Quinn looks bored. This was vexatious emotional emptiness.

“Unpleasant to the point of nausea.”

“I heard you, I'm just not listening.”

“He wants a new wife. Someone to replace me.”