Sigh
A flashback shows a young Abby and Henry bonding making one wonder if Henry killed his parents. It also shows how far back Henry's icky obsession with his half sister goes. Wakefield and Henry continue their murderous plan. Sully sends Shea and Madison off in a boat, why the rest of them didn't pile into that boat and escape some time ago is beyond me. Shortly thereafter Henry confesses his deeds (he killed JD, the Reverend, Trish's dad and stepmother) to his best friend Sully and stabs him. So who put the deer head in Henry's bath tub then?

Jimmy's suspicious of Henry and so is Abby. Then Henry shows his dad who is the bigger loon by stabbing him. Henry burns down the church to make the FBI think everyone is dead. He sets up house with Abby on the island, somehow the FBI don't locate the big house full of windows. Henry reveals that he first met Wakefield seven years ago during Wakefield's rampage when his dear old dad nearly skewered him. Then dear old dad taught him how to be a serial killer. In flashback Wakefield gets to glower a lot.

Henry can't understand why Abby doesn't want to play house with him and so shows off his serious anger management problems. Can Abby escape the loon? How long has Jimmy being tied up in that room? In the end the legend of John Wakefield claims one final victim and the show ends with some video testimonials from the wedding guests on the boat (as seen back in ep 1).

This was very good, Christopher Gorham was really good as the loon. Hopefully after 'Popular', 'Jake 2.0', 'Medical Investigation' and 'Ugly Betty', he'll get a decent show. All in all I enjoyed my trip to 'Harper's Island'.

Best Lines:
"Let's say the psycho has a son. Are you saying he's a wack job like his old man?"
"Maybe he's just really pissed."

"His mom abandoned him, gave him up for adoption. Let him be raised by some loser family who never bothered telling him he wasn't theirs."
"Life's hard, grow a pair."

"You're creeping me out."

"John Wakefield's right behind you."
"How stupid do you think I am?"

"We've completed our search of the island and we found over 20 bodies."

"Wakefield killed my mom and Dad. She was your mom too."
"She threw me away."

"When I looked at him, there was a connection."
"Connection? With the man who hung my mother from a tree?"
"Kinda weird huh?"

"You destroyed everything I ever loved."
"But you have me."
"I DON'T WANT YOU!" 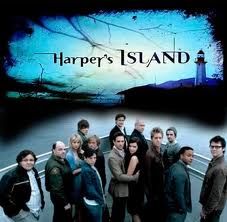