This has cosmic profundity. Baddies have devious pleasure. The GCPD are a toxic blend of indifference and incompetence. Oddly Batman isn't charged with child endangerment for putting Robin in danger. The Joker trying to kill Batman and Robin in a smokestack is creepy.

The Air Force looks into UFOS. What is out there? Crop circles, cave art, cameras, a skull and a symbol. This looks good.

Batman (voiced by the dude from 'The Club' and 'Due South') and Robin fight crime. The black and yellow cape looks good. Ahhh Robin. Why isn't this repeated?

“Kick his head off!”

Burt Ward could have been drafted during the 'Batman' run!

“Behaviour not expected or demanded.”

“Credibility will be entirely and irrevocably compromised.”

“Rests for all eternity.”

“If you're harming that carefully tailored image, you will face the consequences.”

“Kids my age get beat up for nicknames like that.”

On 'Hollyoaks': Mercedes is a trollop who gets her cousin shot and then makes out with him. Liam the rubbish gangster is rubbish. Sinead's husband Laurie targets Sienna. He thinks she is a meek victim he can toy with. Oh Laurie, you fool. 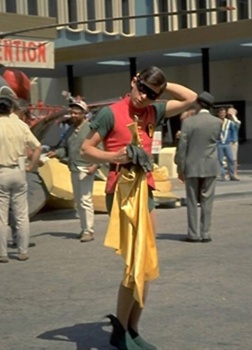