The Black Death by Gwyneth Cravens and John S. Marr

This 1978 novel (which inspired a tv movie) sees a girl bring Yersinia Pestis to NY. She is Patient Zero of a plague that will see corpses and rats in the streets as NY descends pitilessly into anarchy. This is dated as people talk about Jackie, Woody Allen, smallpox and display sexism and racism and have rabid paranoia about Cuba and Castro.

The villain of the piece (who gets away scott free) is slyly distainful and has no care or concern about the future consequnces to the state of NY. Civilisational meltdown and the precariousness of order feature and the ending has some ostensible triumph but also the potential for tragedy. There is a media blackout due to the worsening situation and immediate threat in the city. The WTC is mentioned and as exposition is dropped about the potential threats to the city – no one even conceives of a possible 9/11.

The plague upturns the existing order and it has a significantly negative impact on the city as well as various legal and social implications which aren't really discussed. While this book lacks enduring and haunting power, it is good as the city is nearly obliterated. This being the 1970s – an aura of sleaze and disregard for outside authority hangs over the city. A baddie makes divisive rhetoric and offensive speeches and is unchallenged to the end. The stark effects of the plague are only described in the aftermath and some are tawdry. There is fractious discord and simmering resentment in the city.

Though some have noble intentions, this should change the city irrevocably. There are damning determinations and a moral cost as established norms evaporate. There is a negative emotional impact, stark messages and it does not seem this book led to further glories for the authors. This is a fearsome tale.

“Much emotion and political portent are associated with these forms of warfare,”

“DDT would do the job just as well, and it's safer.” 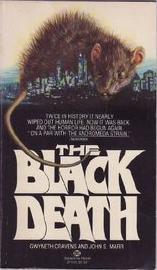