The Gamesters Of Triskelion
Kirk, Chekov and Uhura are in peril from knife-wielding nutters after being abducted. This isn’t a good day. They are being forced into games for entertainment. Again. Kirk gets acrimonious despite the collars of obedience. Kirk overacts in snarling, narcissistic fashion. This is a pitiless environment that needs them to have resilience, steeliness, stamina and integrity in the isolation.
The trio are profoundly alone and friendless. Kirk tries for lonely integrity. Uhura is menaced by a man. Shatner and his bad acting was somehow unsackable. There is a head melting version of morality. This ep was silly. The attack on Uhura is shrugged off. Kirk’s trainer looks like Lady Gaga. The people forced into games are intellectually and functionally separate from society as a whole.
Kirk does not have multitudinous ways of understanding the world; he’s led by his little Kirk. McCoy whines. This ep is wearyingly predictable. McCoy has idiotic entitlement and imperious rudeness. Kirk takes part in the proto Hunger Games. Kirk and co are vended. Kirk lectures more higher life forms on morality and frees the thralls.
Kirk gets his shirt ripped off. Kirk has no obeyance in difficult circumstances. This ep was insufficient. Kirk is fairly violent and particularly angry. The thralls are bred to increase the herd and this was dreadful. There is no civil society on the planet which is run by brains in a jar who are the venal elite. Scotty and McCoy seem close to mutiny. There are ruthless battles and a blatant brutal barter goes on. Also Kirk punches the Lady Gaga lookalike in the face. An Andorian is a thrall and the Gamesters are of severe ill repute.
Best Lines:
“Trinary sun.”
“I will instruct you well.”
“United Spaceship.”
“You are thralls now.”
“The training enclosure.”
“Drill thrall.”
“Wild aquatic fowl.”
“She who bore me.”
“Training harness.”
“Administer correction.”
“I do not think your words are allowed.”
“Landing force.”
~
The Leeches
A man who makes jet age electronics asks David Vincent for help. David Vincent is used to people questioning his integrity and covering up aliens. This was inadequate. What is David Vincent living on? The unnamed aliens abduct people and bluster. Major societal events are ignored. There is considerable uncertainty. A man yells at and dismisses a woman. This ep has endless problems.
Nobody has a sense of shame. The aliens suck out peoples’ learning or something. Well they suck out men’s learning. A bodyguard loves his employer/BFF’s wife and uses his BFF’s kidnapping as an excuse to take the wife. Then he changes his mind. Or does he? TPTB seem genuinely oblivious to the aliens. David Vincent is derided but has temerity. Who’s paying David Vincent’s medical bills when he ends up in hospital?
Genesis
A cop sees an alien and ends up catatonic. Scientists create primordial life in a fish tank. As to what it was all about I don't know. Classic TV, my ass.
~
A Voice In The Wilderness, part 1
B5 orbits Epsilon 3, Sinclair and Ivanova discover the planet has secrets, something nobody noticed before. Talia points out Garibaldi’s harassment of her, nobody does anything. Why does a male Minbari have a beard? How are they born with those boney crests? The Mars colony revolts.
There is talk of a dramatic shift on Minbar and talk of going to the sea and anti-establishment rage. The station’s fighters are called Starfuries. Garibaldi rages and goes on about an ex, Londo sleazes and Talia has to do a favour for Garibaldi. There is bad acting, 90s homophobia and sexism and idiot padding. What are the nets? Sinclair and Ivanova find the Great Machine on the planet.
Best Lines:
“Fired from my last 4 jobs.”
“Atmosphere curtain.”
A Voice In The Wilderness, part 2
Ron Canada guest stars and there is bad acting. Garibaldi assaults someone in a bar but gets away with it. Why does a recovering alcoholic keep going into bars? Unfriendly aliens show up. Delenn and Londo pull crap. Why didn’t Londo ever mention the Great Machine in later seasons? This was terrible. Joshua Cox shows off his 90s mullet. Delenn says Sinclair’s destiny lies elsewhere, Garibaldi doesn’t asks where. 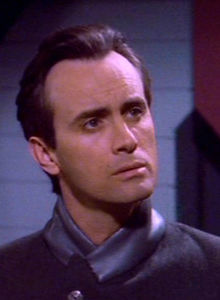 ~
The Money Shot (2011) 1x01
This French drama also known as ‘Xanadu’ has clichéd opening credits and people talk a lot about a famous 1980s porn star called Elise. There is nudity, sad middle aged people, unwanted lodgers and a family who make dated classy porn at their family business Xanadu. Elise was the star, her ex-husband and kids have issues. An actor called Brendon Hardon is sleazy.
Relatives are unfriendly, there are lies, one of the family members is an Andy Warhol spoofing arty wannabe, Elise’s grave is defaced with graffiti and there are family secrets and no date of death on Elise’s grave. A porn-tasche sporting saddo has fantasies, the pervy actor bores, there is a fight and why isn’t Elise in her grave? A woman gets a silly job, there is self harm, the Andy Warhol wannabe causes issues, the ex-husband has a new wife (also a porno queen), the saddo is a perv and an Elise obsessive lurks.
There is a shooting at an Elise exhibit carried out by the obvious suspect. Is the saddo dead? This was laughably dumb. There is no emotional connection just narky bitches and this has no reasonable grounds to exist.
~
Z Nation 4x07
Doc’s Stoned History
The talker food source production centre is located. Murphy mocks 10k and has no class. Petrol still works. George is injured and gets stoned. Where are Red and Sun Mei? Addy mentions her dead boyfriend. Where is Pandora? Doc gives a pot aided lecture on the US government. There are Canadians and the ‘heroes’ are awful. Who cares about Dante? Oh he’s dead - SO WHAT?!?! Warren obsesses over flour. This was not astoundingly confident or committed. In the zombie ravaged ruins of what was once North America, Murphy is still an ass. Season 5 is uneven.
Best Lines:
“Stump boy.”
“No go zone.”
“They don’t make anything. At all.”
“Mean like badger.”
“Roadkill brains.”
~
Hawaii Five-0 2x22
Un Hopu Caught
The extremely boring Wo Fat is caught. Why is Steve allowed to operate in Japan? Kono is shagging Adam (Ian Anthony Dale) - we never learnt how they met. Adam walks around shirtless and exposition is dropped about him going legit. Danno whines. Wo Fat and Steve do a badly choreographed fight in the jungle. Danno learns Wo Fat worked with the CIA.
Chin Ho is mean to Adam who broods and plans to murder Wo Fat. Adam yells that this time his father really is dead and tells Kono to look in the box and Adam tells her there are 5 more boxes. Wo Fat mailed them to Adam. Poor Adam gets sad and pulls a gun. Steve protects Wo Fat.
Chin Ho breaks into Adam’s house. Kono was left tied up in a room by Adam. Chin Ho finds out they’re dating. Why doesn’t Steve just let Adam kill Wo Fat? Kono saves Adam’s life, then he’s cuffed and hauled off but it doesn’t take. Danno is an ass. Wo Fat’s locked up, for now. This was okay.
Best Lines:
“Coming in dark.”
“A certain segment of our Asian population.”
“This where you’re gonna die.”
Tags: babylon 5, hawaii five-0, review, star trek, the invaders, z nation
Subscribe
Comments for this post were disabled by the author