City Of Endless Night by Douglas Preston and Lincoln Child
The latest ‘Pendergast’ novel sees the agent and his friend team up to find a serial killer terrorising NY. Why is D’Agosta still friends with Pendergast? The only experience he has of Pendergast is negative. The serial killer is wiping out 1%-ers in NY. The dynamic duo will solve the case.
A reporter confuses opinion with publishable fact. Who is the dysregulated killer? Does the killer have a plan for moral regeneration or a craving for novelty? Mistaken and false claims are made. This engages the reader’s attention. This culminates in a hunt through an abandoned loony bin. This keeps a grip on the reader’s imaginations.
Best Lines:
“All is discovered - flee at once,”
“All this is obviously calculated to create a particular effect-”
“I’ve developed an unfortunate reputation at the Bureau as an agent whose perps end up dead.”
“My opponent lost rather dramatically.”
~
Mighty Morphin Power Rangers Volume Five
Finister and Grace bore. We get a flashback to Zordon’s first MMPR team in the 1960s. There was a Russian on the team, he looked like Illya Kuryakin. The wildly annoying Grace sulks and whines and has no consideration. This was mediocre.
Best Lines:
“Power Rangers! Wow! You’re even more garish in person!”
“Crowverload.”
“Insert witty quip here.” 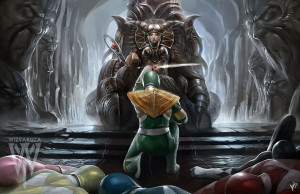