‘Chilling Adventures Of Sabrina’ trailer
This looks awesome.
‘Mary, Queen Of Scots’ trailer
Blood, a red dress, Mary lies and whines. She and Elizabeth never met. There is a gun. Mary runs her mouth. She always had the absolute intention of stealing the English throne. It went badly for her.
Best Lines:
“How did it come to this?”
“She comes ready for war.”
“Depose a sister monarch.”
“A woman with a crown.”
‘The Magicians’ season 4 trailer
Margo who is now Janet gets a visit from the dead Ember. He has a warning and kittens. This looks okay.
Best Lines:
“Great ill is afoot.”
“This is concerning.”
“Horned person.”
‘There She Goes’ promo
No.
‘Rizzoli & Isles’ opening credits
Mmmmm.
‘Mosie’ TV spot
Sap.
‘Finding Joy’ promo
No.
‘Malevolent’ trailer
2 con artists go to a haunted house. There are lies, blood and hitting.
Best Line:
“It’s all an act.”
‘Into The Dark: The Body’ trailer
A hitman lurks. The body moves, there is death and idiots and this looks good.
Best Line:
“The British American psycho.”
Chocolate fudge - yum.
Wasabi crisps - okay.
Peanut cocoa honeys - yum.
The guy who played Brendan Brady on ‘Hollyoaks’ has been cast on season 2 ‘Krypton’ as Lobo. There goes my interest.
Who saw ‘Secret Window’ or ‘A Star Is Born’ (1976) or ‘Good Burger’?
I hope to review ‘The X Files’ season 11.
Nathan Darrow was in an ep of ‘Quantico’?!?
Who read ‘Divorcing Jack’ or ‘The Twelfth Day Of July’?
Tommy was more popular than any other ‘MMPR’ - well duh.
I miss Meechum on ‘House of Cards’ even if he was FU’s sex slave puppet. And FU had a fetish for manipulation.
I want a Liya suede satchel, a Whitney chain shoulder bag and Sammy knee high boots. Also I want a Metropolis mini cross body bag, Hazel pumps and a Ralph Lauren handbag. I would also like a sparkly green dress. 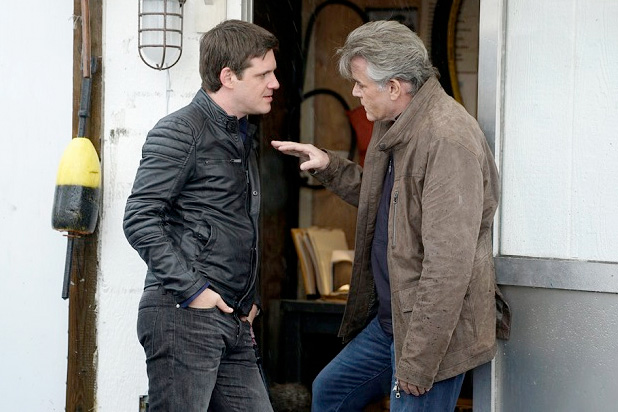 ‘Inside No 9’ Quotes:
“Makes me feel like I exist.”
“You invited a tramp in off the street and got pissed with him!”
“Sounds like the kind of sh*t they tour around old people’s homes.”
‘Mission Impossible’ Quotes:
“Boxing back in the hands of honest men,”
“Bang him one.”
“Like them bulky and not too bright.”
‘The Irish Times’ Quotes:
“Enforced hypocrisy.”
“A star on her own terms, and they aren’t his.”
“Cheerful hatred.”
“Stood in sullen groups.”
“Social advancement.”
“Contested story.”
“That no one needs and, increasingly, almost no one wants.”
“No shortage of social standing,”
“Relying on women’s anger.”
“Vanished mores.”
“Giving out on the Joe Duffy show.”
“Far too subservient to the European Union.”
“Fawned over on radio and television.”
“Did his country no service.”
“Stunning collapse in support.”
“Family reckoning.”
“Other world cities have been destroyed by crack.”
“They have no right to know what I did there.”
“Preoccupation and fears.”
“Those who had welcomed him into their privileged lives began to turn against him.”
“Forever boiling hams or throttling chickens while in mid-conversation.”
“Any recognisable human instinct.”
“Undertake forced domestic labour.”
“Hitchcockian neurosis in a cardigan.”
Service user.”
“Unemigrated.”
“The act of looking also becomes a responsibility.”
‘The Gloss Magazine’ Quotes:
“Trades sex for a place at the table, knowing she’ll never be allowed to work her way there,”
“Speech orientated culture,”
“Not given the opportunity to use their full bodily capacities.”
“Cultural features.”
“Questioning social expectations.”
‘The Magicians’ Quotes:
“Hedgewitch Buffy.”
“Her fate is her own.”
“Logic this with me.”
‘Red Dwarf’ Quotes:
“All crew should run around screaming!”
“Die nobly.”
“Where’s my dinner at?”
‘Dr Phil’ Quotes:
“Doesn’t work, cook or clean.”
“I really could care less.”
“You’re on your own.”
“What is your intended impact?”
“Choking each other out.”
“Let my life get this bad.”
‘Sky News’ Quote:
“I don’t call him popular.”

‘House Of Cards’ Quotes:
“Snapping on a flag pin.”
“See you round.”
“Hopefully less and less.”
“Weep a river of snot.”
“Nobody wants your condolences.”
“Not be the news.”
“Don’t be so arrogant.”
“Capable and beautiful and ambitious.”
“Go before I get violent.”
“A meeting.”
“With who?”
“Someone I have to punch.”
“No class.”
“Cancel the string quartet.”
‘Queens Of The Conquest’ Quotes:
“Emotionalising history.”
“Involved in numberless troubles.”
Tags: chilling adventures of sabrina, house of cards, krypton, mission impossible, quantico, reign, shades of blue, the magicians, the tudors, thoughts, tommy oliver, trailers, xfiles
Subscribe
Comments for this post were disabled by the author