Mighty Morphin Power Rangers Volume Six
Who are Grace Sterling and Promethea? Where do the rangers keep their weapons? Zordon has kept secret the existence of a power rangers team in 1969. Add to this, his secrecy about the existence of the 6th power coin and you wonder why anyone trusts him. The MMPR fight a monster. Zordon’s back (he was gone?) and AU Saba hangs out. Rita wants the green candle (oooohhhh!). Kimberley and Tommy have issues. Finister is locked up. But not for long.
The MMPR learn that Grace somehow has the insane Lord Drakkon locked up. Also not for long. There is a loss. This was okay. Tommy is no longer made to feel unwelcome. The MMPR react with alarm to meeting Lord Drakkon and fear the unbridled power he has so recklessly wielded. There are secrets, resentment and Jason is poisoned by doubt about Grace.
Lord Drakkon gatecrashes the narrative with an agenda all his own. The storyline is grittier and sadder. Lord Drakkon is painfully overwrought and self-fabulating and full of grim foreboding. Jason is all vague moralising. Is Lord Drakkon jealous of the possibilities Tommy still has ahead of him? Tommy stoically accepts weirdness. Tommy is lovelorn. Lord Drakkon is vexed and brutal. He is also super-hostile moral rot.
I don’t care about Grace and her emotional fallout. Lord Drakkon is all negative tropes. Grace excuses and trivialises her lies. Everyone who encounters Lord Drakkon hates him and their hatred is totally justifiable. Lord Drakkon looks evil smelling. Rita plans ravages and Lord Drakkon has a refusal to be shamed. Trouble is going on. Kimberley harangues people. Tumultuous stuff happens. Lord Drakkon acts without regard to the consequences and there are gruesome occurrences.
This is an enjoyable ridiculous mythical extravaganza, but it is not raw or revelatory. Tommy has his integrity intact. The sinister sociopath Lord Drakkon is a dissolute sour note. Grace is a constant source of mistrust and a major irritant. Jason expresses grievances. Lord Drakkon is fanatically determined and quite confrontational and contemptuous. He’s greeted with distain and rumblings of discontent. Jason is morally serious. Lord Drakkon is all self-adoring delight and driven by ambition and hateful rhetoric and limitless egotism.
Best Lines:
“A temperamental moon witch.”
“Understand, first hand, how weird it must be to be a part of something Zordon’s kept a secret.”
“Some of my concern comes from where she may have obtained it.” 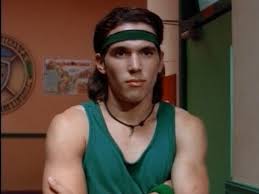 ~
Nightmare’s Realm: New Tales Of The Weird & Fantastic edited by S.T. Joshi, part 2
A Predicament
A tale of inexorable vengeance that was not disturbingly convincing.
Kafkaesque
This has no narrative chronology, just a steady and unending stream of stupidity.
Best Line:
“People want what isn’t meant for them.”
Beneath The Veil
A ridiculous tale of a man who thinks his bride has negative attributes.
Dreams Downstream
Dreams come to life via rogue wifi or something. This was not well-received.
Death-Dreaming
This was unpleasant and achieves nothing of note.
Cast Lots
No stylistic invention here.
The Wake
One is disengaged.
Dead Letter Office
By Caitlin R Kiernan. This is a good post-apocalyptic tale.
Best Line:
“If we could pull back the veil, what would you see, and, more to the point, what might see you?”
The Art Of Memory
This causes no deep satisfaction.
What You Do Not Bring Forth
An uneasy tale that while okay makes no real sense.
The Barrier Between
This has massive indebtedness to Lovecraft.
Sleep Hygiene
By Gemma Files. An insomniac begins to dream. Narrative destiny unfolds. There are demented suspicions. This was an excellent and creepy and unremittingly bleak tale of uneasy dreams.
Best Lines:
“Light-tight.”
“Some age before mortar.”
Tags: book review, tommy oliver
Subscribe
Comments for this post were disabled by the author