Wild Wild Country Part 6
The Man does seem to have had a vast over-reaction to the cult leading to a stand-off. The cult’s former Oregon compound is now a Christian youth camp. The Man has righteous rage. Nothing changes. The guru had guns, money, jewels and his throne in his lear jet when arrested. Some cult members can’t accept that they were dictated to by a charismatic charlatan.
Today, the cult goes on despite the guru‘s death. The guru changed his name to Osho for some reason. People had erroneous opinions. Sheela went to jail, the guru did not and the fate of the ranch animals is not mentioned. Hilarious vintage footage is shown including Johnny Carson. The compound shuts down. There are consequences and emotional conviction. This was okay. Nobody seems to be held responsible for anything.
Best Lines:
“Who are you lady?”
“A group they can fear and hate.”
“Legal attacks.”
“Burning grounds.”
“He is transporting bad guys.”
“Manifest his vision.”
“Secured themselves.”
“De-plane.”
“Looting him.”
“Most amazing place on the planet.”
“Prison dungarees.”
“A fleece from day 1.”
“Contagious herpes.”
“Avoid my misery.”
“Strangely indifferent.”
“Get this community.”
“I don’t think America has a place for these people.”
~
Into The Forest I Go
Lorca has been making a map of the network and it shows they could explore parallel universes. Foreshadowing! The doctor can’t act. Lorca fosters the crew’s loyalty. Nothing is unacceptably daunting for Burnham. The Klingons gurn. Why is the camera tilted? Burnham and Tyler plant unsubtle looking sensors on the Klingon ship. Tyler has flashbacks and the injured Cornwell is found.
Does nobody notice the large sensors covered in Federation markings on the Klingon ship? The Discovery spins and jumps. The deceased captain’s combadge is seen, combadges have names on them. L’Rell ends up on Discovery. There is a fight. Lorca treats his eyes so he can watch the ship of the dead blow up. Does his uniform have pockets? Lorca is to get the Legion Of Honour for his victory.
Paul doesn’t want to use the spore drive anymore. Klingons use bed sheets. Tyler recalls being in bed with a topless L’Rell. Creepy. L’Rell is in Discovery’s brig. Lorca inputs co-ordinates after Paul says he will do one last jump. Things go awry and the ship ends up somewhere unknown. Saru can’t determine their position. This was okay but you could see Paul’s special effects contact lenses.
Best Lines:
“I have no purpose here.”
“Go where no man has gone before.”
“Negative mass.”
“Alternative parallel universes.”
“Places we never dreamed we could reach.”
“Sick affection.”
“We did that.”
“I don’t know where we are.”
“Sit through that with me.”
“Mask our human lifesigns.”
“Everybody comes home.”
“Locked our people into this war.”
“Your accomplishments have not gone unnoticed.”
“Celestial existence.”
“White matter hyper-intensity.”
“Let’s go home.” 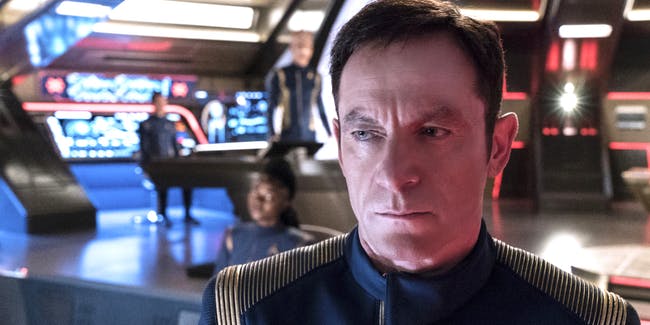 Despite Yourself
There is a mention of Organia. The crew realise they are in another universe. Discovery hasn’t sent the cloak equation to Starfleet yet. Paul slaps around the unemoting doctor. Tyler freaks out. L’Rell freaks out. They’re in the mirror universe and they find a data core and they learn about the Terran Empire and the rebellion. The MU Tilly aka Captain Killy is Captain of the ISS Discovery. Lorca puts on a Scottish accent.
Lorca comes up with a plan to pose as the ISS Discovery and the crew dress up in bling MU uniforms and makeover the ship. There is a mention of the events of the ‘ENT’ mirror universe eps. The MU Connor is Captain. Lorca slams his head against a wall to sell a story. The crew pose as their MU selves. The doctor realises Tyler is a threat and so Tyler kills him. Burnham kills MU Connor in a turbolift fight. Nobody misses him. The MU Detmer applauds. This was good.
Best Lines:
“I don’t know who you are over here just yet.”
“Terrans don’t apologise.”
“Long live the empire!”
“Captain killy.”
“Outside acceptable margins.”
“Position relative to the galactic centre.”
“This is not our universe.”
“Extraordinary fortunate coincidence.”
“Neurological deregulation.”
“Did you want all of this to happen?”
“Fascistic human only organisation.”
“Dominate all known space.”
“Unconditional hatred and rejection of anything and everyone other.”
“The Empire laid waste to your ship in retaliation.”
“The Emperor is savage.”
“Posing as your Terran selves.”
“What used to be called brainwashing.”
“A functioning consciousness.”
“You’re not you.”
“Decency is weakness.”
“Whatever you must. To anyone.”
“The enemy is here.” 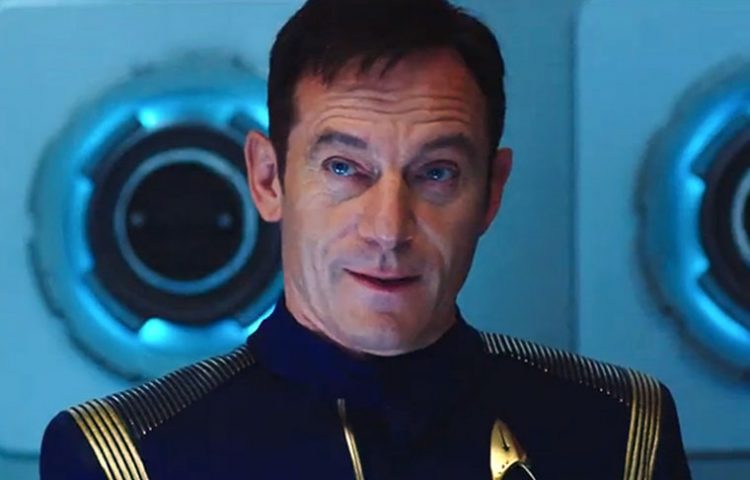 ~
Holly
This boring unnecessary ep is not particularly impressive. Offred is stranded somewhere. The Commander shows dissatisfaction with his wife. The selfish Offred doesn’t care about Nick possibly being taken away to his doom. Serena Joy has persuaded herself to believe the brutal suppressions of Gilead are all worth it. There are more useless flashbacks. Oprah broadcasts the news on the radio - there are mentions of refugees and sanctions.
Some reviewers rave about how over-whelmingy talented the actors are. This seems like a vanity awards bait ep. The Waterfords are fulsomely awful and their convictions have inured them to acts of extreme cruelty. There are flashbacks to the handmaids being trained for labour. How long did handmaid training take?
This ep tries for sadistically sad. But it is just meticulously boring. Serena Joy shrieks. What happened to the family who lived in the now vacant house? The schismatic Gilead goes on. Serena Joy’s ornamental stoicism cracks. This show tries for apocalyptic warnings. Offred has memory bias when it comes to Luke. There is yelling and she gives birth and names her baby after her mother. The Waterfords fight and sneer like trailer trash. Offred was awful to her mother in flashback. A wolf lurks. Seriously. Offred lights a fire and fires a gun. Why is she so dumb?
Best Lines:
“They hate you.”
“I believe you into being.”
“I gave up everything for you and for the cause.”
“They’ll put us on the wall.”
“To have a pregnant handmaid run away once is bad enough. But twice?”
“When did you become such a bitch?”
“We are still here.”
~
The Blood Of Romeo
This is the controversial ep. There’s a nuclear reactor on a college campus? A physics professor has stolen uranium under duress. Shelby sneers at Alex. Harry ponces. Where are Dayana, Will and Sebastian? Nobody notices the spy camera coming through the floor? Harry is in trouble. Why don’t the baddies recognisee Alex? Isn’t Alex legally dead? There are redneck jokes and wilful inconsistencies and worryingly myriad illogic. Shelby has no courteous words of support for Ryan. She’s the side-piece who stole him. There is a twist and this ep is not acclaimed. Where is Alex’s mother? This was mediocre.
Best Lines:
“There’s a but.”
“Covert clearance only.”
“Home stays home.”
“Smart don’t mean clean.”
“Couple of dudes with big guns.”
“Who doesn’t have wifi in 2018?”
“Sovereign Property.”
“Stabbed the buyer in the back with your high heel.”
~
Wanna Play A Game?
There are grim memories of the 1994 murders. One is not inexplicably intrigued. Emma sneaks around. The slutty girl sluts. The quiet lives of the Lakewood residents has been disrupted. Jake comes across as a creeper. Emma arrives at Rachel’s wake dressed like a call girl. Audrey feels the seismic effects of Rachel’s death. Emma wears a tiny skirt to school.
Emma can’t act and rants about secrets and lies. People have conversations. Nina was blackmailing people. Jake and Will plan violence on each other. The sheriff lurks in bushes. The sex obsessed slut heads off for a hook up. TPTB sexualise grooming. Emma gets a life or death choice. Why isn’t the nice Asian nerd being watched by cops? The nice Asian nerd is murdered. Why didn’t she call the cops with the phone she was holding? Emma is an awful person. This bored.
Best Lines:
“In your dreams mouth-breather!”
“If you suggest the pool scene from ‘Wild Things’ - I will end you.”
“I wanted to, like a lot.”
“Psycho killer’s remorse.”
Tags: handmaids tale, quantico, review, scream(tv), star trek
Subscribe
Comments for this post were disabled by the author