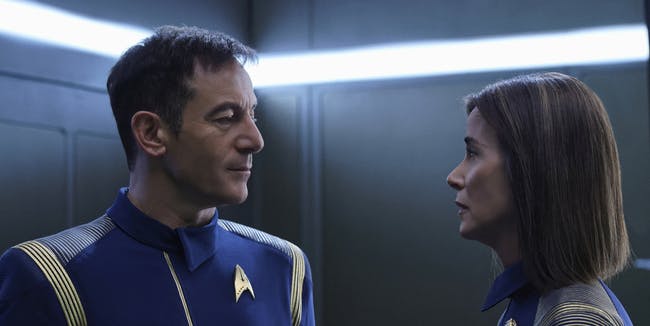 Magic To Make The Sanest Man Go Mad
The disaffected Harry Mudd returns for vengeance against Lorca cos he is an ass. Harry Mudd claims to love Stella but he doesn’t. Which makes his ‘TOS’ fate hilarious. Mudd somehow has a time travel device and he traps the USS Discovery in a time loop to kill Lorca over and over and over again. Paul can see the time loop. What are Lorca’s private dynamics? What happened to the space whale? Burnham causes issues. Mudd’s ill-will spreads and he is really annoying. This ep was irritating. Betazed is mentioned. There is a time crystal. Mudd ran out on Stella. I did not like this ep at all.
Best Lines:
“A space whale.”
“Does it melt brains?”
“A 4-dimesional race.”
“The Klingon’s messiah.”
Si Vis Pacem, Para Belum
The captured Admiral Cornwell meets L’Rell. How many show runners has this show had? This ep was written by Kristen Beyer of the ‘VOY’ reboot books. A Starfleet ship is blown up. Paul has creepy ports in his arms. Burnham, Saru and Tyler go on a secret mission on a strange planet. They make first contact with a life from. Who built the hut?
Ash Tyler and Burnham kiss. Saru runs, hilariously. Paul again has a preening waspish presence. L’Rell says she wishes to defect. Saru acts out. The Klingons watch L’Rell and Cornwell catfight. L’Rell sees dead Klingons and is in peril. The Klingons act bizarrely. Things go awry and this ends on a cliffhanger. This was okay.
Best Lines:
“Fire at something.”
“You won’t stop taking!”
“Invisibility screens.” 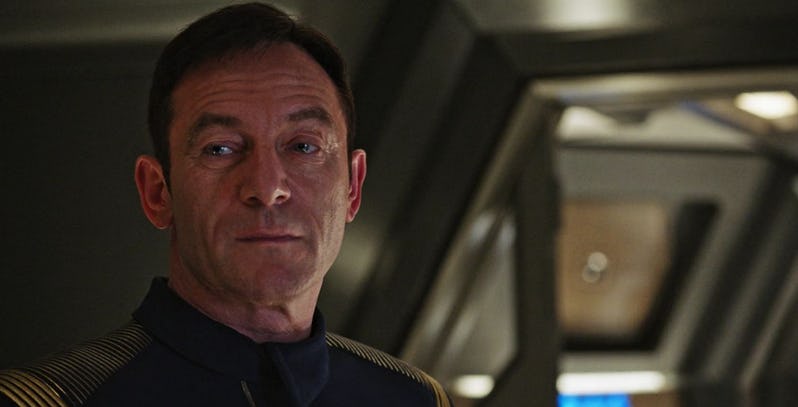 ~
The Farmhand Who Bought The Farm
Harley prances around in his pants. A guy is run over by his own tractor and then a meth lab blows up. Bikers show up. This was not good.
Best Line:
“Cop people.”
“She is a saucy harlot.”
“Rules have teeth.”
“Why would a millennial even have a walkie-talkie?”
“Chauffer slash sidekick which is exactly what Bruce Lee was in ‘The Green Hornet’.”
“Bruce Lee was dead at 32.”
~
Pieces Of a Broken Mirror
Poison Ivy shows up. Alfred hangs out being pathetic. Lee plays at being Mother Theresa. How is Alfred poor? Didn’t he get a severance payment? Solomon Grundy recalls he is Butch. Bruce does his talk-yelling and partying. He isn’t going to school, is partying underage and has no guardian. Where are social services? Gotham has a culture of complacency and scathing wit.
Gordon is impervious to unwanted realities. The Toymaker strikes. Moral boundaries are undermined. In Gotham there is little but bad news. Poison Ivy has been recast yet again. There is a Sirens Club TV ad. Poison Ivy eats green ice-cream and kills people with poison ivy. Bruce is a jerk. Barbara wears another polyester wig. Emotional skills go unlearnt for Bruce. Alfred is in trouble. Bruce is time-sucking vampire. Gordon doubts Alfred. Gordon is not fitted for his job. Gordon sees Lee who is hostile. Riddler bores. There is destructive ambition all round. Bullock has a fierce reaction. This was BAD.
Best Lines:
“You’ll like it. It’s nice.”
“I know you. All of you. And I’m pretty sure I hated you.”
“In the flesh. Just different flesh.”
“Crazy loon.”
Tags: gotham, helix, izombie, review, star trek, the green hornet
Subscribe
Comments for this post were disabled by the author