Trailers, Quotes and a 2005 Tape Tale

‘Supergirl’ 3x14 promo
Who’s dead? The Toymaker is dead? What a waste. Winn’s mother shows up. Is James Olsen still on this show?
‘Harry and Meghan: The Royal Love Story’ promo
A TV movie nobody wants.
‘Ultraviolet’ (2006) trailer
Good music, bad movie.
‘Hatchimals’ ad
No.
‘Zoomer Sups Pretty Ponies’ ad
Nightmare fuel.
‘Lig Liom’ promo
What a hopeless.
‘A Quiet Place’ TV spot
Yes.
Recall the ‘Smoke and Mirrors’, ‘Lesser Of Two Evils’ and ‘Diana’ eps of ‘Spooks’?
Bradley Cooper was in the dreck 2002 horror movie ‘My Little Eye’.
Who saw ‘Kolobos’ (1999)?
‘Dr Phil’ Quotes:
“In a loony bin somewhere.”
“Brings drama and negativity.”
“Wrath I unleashed upon them.”
“Unacceptable to your standards.”
“Identity disturbance.”
“Self-victimisation.”
“Blow a hole in the front door.”
“Giving them what you want them to have.”
“Mentally deranged.”
“I am your family joke.”
“Looking for a way to exclude.”
“Queen of broken promises.”
“Did you come?”
“Attention grab.”
“Fight a 15 year old girl.”
“Hurling dishes.”
‘Neighbours’ Quotes:
“Life is full of scumbags.”
“Sole purpose on Earth is to cause me pain.”
‘The Irish Times’ Quotes:
“Gap couples.”
“A quite expected and probably quite correct event.”
“Completely erase his legacy from the organisation.”
“Truculent and resentful.”
“Rising lawlessness.”
‘Sky News’ Quote:
“Performance season.”
‘The Sunday Business Post’ Quotes:
“Social/cultural constraints.”
“No longer debatable.”
‘3News’ Quotes:
“Hamlet without the prince.”
“Forced separation.”
‘The Simpsons’ Quote:
“Jerkwater berg.”
‘In Bruges’ Quote:
“Brothels are good.”
‘Hatchet III’ Quote:
“That has to be the stupidest story and some of the most idiotic and contrived decision-making I’ve ever heard.”
‘House Of Wax’ (2005) Quotes:
“I heard something.”
“It’s probably a serial killer or something.”
“Why on earth did your brother have to come with us? I mean I thought you said your parents weren’t going to post his bail anymore.”
‘Deadpool’ (2016) Quotes:
“Rooms with a bunch of other little whiners at Neverland Mansion with some creepy, old, bald, Heaven’s Gate-looking mother.”
“I had another Liam Neeson nightmare. I kidnapped his daughter and he just wasn’t having it. They made three of those movies. At some point you have to wonder if he’s just a bad parent.”
~
Cleared out a tape from 2005. It began with a ‘Criminal Minds’ ep ‘The Fox’ which had Tony Todd, Abraham Benrubi and Meredith Monroe in it. The image seems out of focus. The gang are sure of their ability to determine morality and this was dubious.
Then came an ‘Invasion’ ep ‘The Son Also Rises’ sees an angry teen boy with a gun who wants to vent fury and rage. He gets away with his crap. The hybrids plot. Human dad and alien dad yap about moral welfare. There is unarticulated resentment and rages and the violent teen brats get away with it. There was no limitless potential here.
Best Lines:
“They’re all hybrids. The people not the cars.”
“Do you care now?”
Then came a ‘Smallville’ ep ‘Void’ in which people have an amazing dedication to being awful to Lex. This was trashy. Clark wears red and blue endlessly. There is moral simplicity and what happened to Clark, Lana and Chloe attending college? There are no moral standards and Clark is an intrusive nuisance who pushes people beyond reasonable limits. Lex latched onto Clark for showing him a moment’s attention and misinterpreted that as long lasting love and eternal devotion and invested everything into that relationship. Clark could care less.
Best Line:
“The least regard for my privacy.”
Then came a ‘Battlestar Galactica’ ep ‘Downloaded’ which sees cylons resurrect in goo. The cylons have an amazing dedication to hair dye and doing opaque whispering. Original Boomer wakes up back on Caprica and I don’t care about the cylons POV. Nobody cared about original Boomer eventually. The special baby is born. This was uinsightful. Boomer learning there has never been another purpose to her life was wasted. 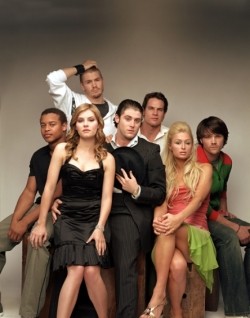 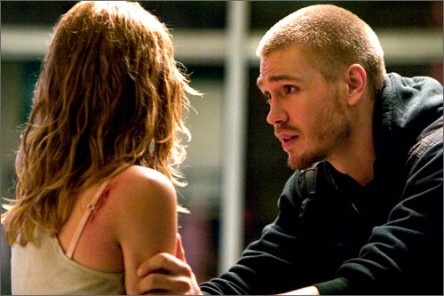