The Deadly Quest Affair
The baddie (Darren McGavin) acts so conspicuously that he cannot be trying to avoid attention. The show continues unabashedly chronicling the duo who have no seriousness of purpose. Solo is a perv and makes frequent craven pronouncements. Illya is kidnapped, again. This ep does not sully itself with logic. Another bad guy with a silly accent is without mercy. The dude kills his henchmen and holds Illya hostage to hunt Solo as part of a revenge quest.
Waverly looks bored. What is M.I.P net? Solo and Illya are entwined. A message is sent via a myna bird. The reprehensible baddie has perdurable indifference to sense. This ep has no rigour or clarity. Illya stoically sits radiating blistering scorn. The reunion movie never explained the wilderness years. But at least season 4 is look-forwardable-to after the nagging discontent of season 3.
A smirk inducing innocent wears a pricey necklace and tries for cosy charm. Why is she there? Season 3 was relentlessly wacky and universally derided. The nuisance innocent is LOUD and goes on about Solo’s primal thrust to his bemusement and annoyance. The baddie had dread-reek and a grating sneer and jadedness. Illya is quiet and stoical and all wise sadness.
Why is there an extremely bleak 10 block condemned area of NY? Well actually it is the burnt down MGM backlot but still. What happened to the duo’s cheery rapport? Illya bites a glass. After Solo’s condescending comments and gurning, no wonder Illya left UNCLE. The baddie isn’t monstrous or impressive and does not intimidate or threaten. The baddie’s one non-murdered henchman is called Stefan which was the name of the lumbering butler in Robert Vaughn’s movie ‘Transylvania Twist’.
This was okay entertainment. People sound like they are reading lines off cue cards. Doesn’t Solo get cold in the freezer? Why doesn’t he get freezer burn from touching the pipes? Why are there air raid sirens? The innocent has no curiosity, awe or fear. The baddie has a poor leopard. This was not brilliant or charismatic. Solo does no self-criticism. Sometimes you wonder why and how this show was much loved and admired. Vaughn goes for it with absolute conviction. The baddie dies a dumb ass death.
Best Lines:
“Something less pleasant than death.”
“What was left of Karmak was staked out in a jungle clearing for the scavenger ants.”
“You see, in existential-art, we don’t use any of the classical methods.”
“Her father bough her a gallery.”
“Nasty people.” 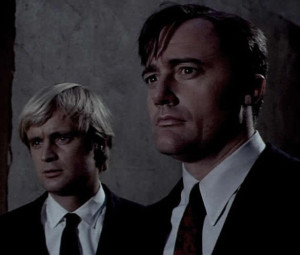 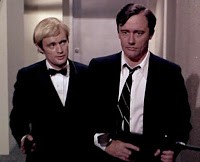