The Thrush Roulette Affair
A bad guy (a cadaverous Michael Rennie) has people under duress. The duo are incapable of acting surreptitiously. Uneasy looking men have weary resignation to obey the baddie with dumb avidity. Solo is not furtive. Illya has chilling quiet and the bad guy engage in sexual harassment.
How was this plot of an evil gambling parlour deemed credible? What are Illya’s unseeable depths? The plot fails to gain momentum. Solo has a snippy tone. This lacks urgency and overall coherence. Solo would end up a gambling playboy in the reunion movie. Sigh. A woman has jacked up teeth. This was uneven. The baddie has a frightening indifference for life and a diabolical scheme for organised mischief.
This was not exquisitely nasty as Thrush brainwash captured prickly personality Illya into feeling adversarial toward Solo. Remember in that ‘Banshee’ ep how 2 adversaries beat each other up for the ENTIRE ep? That doesn’t happen here. Somehow the Solo/brainwashed and crazy Illya brawl is a non-event despite their complex interplay.
How does the notoriously taciturn Illya feel about being brainwashed? We’ll never know. Solo shows no visceral emotion. This was unillustrous. There is bad acting. Solo is less surprised than he probably should be to realise Illya is hell-bent on murdering him. Illya’s accent briefly shows up.
The Thrush baddie yells and threatens people with the peril of his indignation. His intentions bode no good for the duo. But he still dies in ridiculous fashion. Did Illya go for Solo with full ferocity? Luckily Solo has a persistent and fixed interest in Illya. Apart from when he quit UNCLE and didn’t see or speak to him until the reunion movie.
Anyway the brainwashed and crazy Hawkeye/Black Widow brawl in ‘Avengers’ was better then this. The fight has obvious stunt doubles and isn’t as vicious as it should be. Solo slaps the brainwashing out of Illya and innate hostilities end and it is all shrugged off. Solo demonstrates that he doesn’t know trigger discipline.
Best Lines:
“You don’t know what we’re gonna do to you.”
“Bust you up.”
“Your previous playboy of the western world.”
“Another UNCLE agent has been added to our collection.”
“Affect his destruction.”
“Clip palace.”
“Up is better, you know that.”
“Drying out winos.” 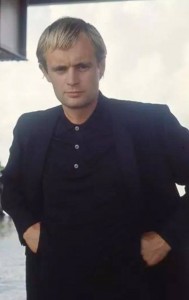