Next Of Kin (2018) 1x01
This ITV drama sees GP Mona Shirani and her loving family face shock and horror when a relative is abducted abroad and apparently killed. Mona’s nephew has vanished from his college and the cops ask questions. This was boring with no notable features. The family have dubious connections and continued torment. Who is imperilling them and why? This does not enrage, sadden or delight. This has no rawness or honesty.
Best Lines:
“Four time zones away.”
“I’m sure he does it on purpose.”
~
Carpathian Eagle
Murder victims are being found with their hearts cut out in this memorable episode. Anthony Valentine, Suzanne Danielle and Pierce Brosnan star. There are white high heeled ankle boots, an obviously fake accent and a perv with a porn-tache. There is back fat and nice opening credits. This has a very 1970s vibe as a rough arse cop (Valentine of ‘Raffles’) looks for the killer. He learns of Natalie (Danielle) an author writing about a long dead countess who 300 years ago liked to cut out the hearts of her lovers. I wonder if ‘Basic Instinct’ borrowed from this.
Valentine’s flat has 70s décor, a glass milk bottle, a big radio and a wall mounted phone. He wonders if someone was inspired to become a serial killer by Natalie’s book which has not yet been published. The cop wonders why people are being killed. There are no moralistic quandaries and there is blathering about the unconscious. Does the killer have DID or what? The killer is obvious.
A mad old lady babbles and has a drag queen nephew. There are desperate contrivances and no stoniness of despair. The cop tells off his partner for being homophobic - he’s progressive for 1980. A fake old rich perv escapes the killer after picking up a woman with murderous instincts in the street. Some reviewers call this misguided and forgettable but I enjoyed it.
This is insane and has a genuinely creepy ending. A jogger (the future 007 Brosnan) in his Fred Perry attire picks up in the loony killer in a park and dies off screen. Natalie hides a key under an outside window sill, nobody notices. Suspicion dissipates the copper’s goodwill. The police search Natalie’s house and fail to the notice the key.
The killer has no power or menace in this non-grimy, non-hard-edged tale. The cop is brilliantly callous and dim. Natalie has coldness and a matter of fact approach to lying. Her flat affect is oddly disturbing. Is it bad acting or an acting choice? Natalie is the killer, like duh and has disregard for human life for no clear reason.
Natalie dumps the cop after the house search and is temperamental. She undumps him and nobody is warm, empathetic or engaging. There is no deep psychological or emotional pain or tormented memories that explain Natalie. The cop thinks he’s gonna get lucky but instead as he lies on his green bed in his green bedroom, Natalie produces a full wig and costume to dress up as the Countess. Where did she get the cosplay getup? She kills him in his green horror of a bedroom and where did she get the outfit? Where was it hidden?
He’s sad when he dies and somehow she isn’t a suspect. His name was Cliff, maybe. This was before DNA evidence apparently. A camera crew with tight jeans lurks at Cliff’s funeral. The drag queen has grief and sadness. There is no dread-filled silence or frame filling darkness. Then things get morbid and eerie as Natalie proves to have no humanity or tragedy.
Natalie meanders to a new location and a new obsession. A gardener (W Morgan Sheppard) tells her of a killer nurse who strangled rich men with a silk scarf while he himself wields a scythe. The last we see of Natalie she is posing with a nurse’s uniform which she then discards to reveal her hard body in sexy underwear as she tests out a silk strangling scarf. Creepy. This was very good.
Best Lines:
“You knew you were going to get more than a lift into town.”
“Not lost his desire for her.”
“Selects young men to be her lovers.”
“People liked that sort of horror story.”
“It’s an alarming thought.”
“To all intents and purposes lives a wholly unremarkable life.”
“The wolf takes over.”
“What nephew?”
“Don’t be temperamental!”
“Not in the business of making life difficult.”
“Thinking in clichés.”
“The Eagle Woman.”
“Let fly with his handbag.”
“Entertaining loonies in their absence.”
“I wish I’d been more understanding.”
“Journalist scum.”
“I break his head!”
“What have we done you and I?”
“Them rich old boys.”
“Set up a nice looking girl in a little love nest.” 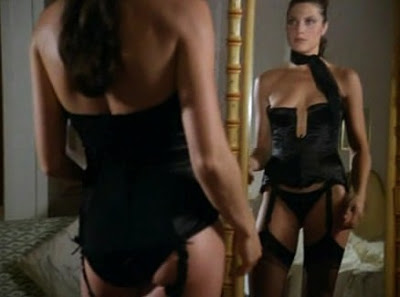