Kiri (2018) 1x01
This Channel 4 drama sees social worker Miriam arrange for Kiri to visit her grandfather before her foster family adopt her. Miriam the peppy social worker is an unrelenting presence in people’s lives. Background music blares at dialogue smothering volume. Miriam patronises threatening and volatile people and has overawed enthusiasm about her own rightness.
Her Faustian pact of compromises and smugness is about to blow up in her face. Kiri goes missing and she is offhand with the police. She has no degree of urgency. Kiri’s birth father is suspected of abduction. Miriam feels no emotional discomfort and has a worrying lack of appreciation of reality. Kiri’s foster brother is resentful and jealous. Kiri is found dead. Miriam’s mouth hangs open in response.
Miriam has a dead son and a ghastly sick mother. I have withering impatience for Miriam and this. Miriam won’t take reasonability but she’ll probably get away with it and write a book like the obvious inspiration for this show: Sharon Shoesmith.
Kiri’s grandparents are grief stricken. One of Miriam’s co-workers babbles insanely. Miriam gets drunk and I don’t care about her emotional difficulties. This was not feelingful or astute. No explicit moral is tagged on. Miriam is provocatively unsentimental and only cares about herself and not Kiri’s death. All she cares about is her reputational hazard. This terrible with no dynamism.
Best Lines:
“I like sausages.”
“Remember to cook em this time.”
“You put her in hospital.”
“A chaotic and dangerous parent.”
“Out till 2am last night for the third time this week.”
“Sexual risk.”
“Not safe to approach.”
“Educational fugitives.”
~
Nightmare Classics: Turn Of The Screw (1989)
Amy Irving and her fake English accent stars in this take on the Henry James novel. She is a governess hired to look after 2 children. One of whom is Miles (Balthazar Getty). There is causal sexual harassment and this was a precisely unsympathetic take on the source material. Linda Hunt is in this somewhere. A bad child actress has crimped hair. Getty does a bad accent and there is no wistful pathos in this grim thing. This was terrible in lots of ways. The kids are self-obsessed, petty and inconsiderate of other people’s needs.
Miles talks of impropriety and seems to be inciting a reaction. There is no sense of doom. The big old house is a marker of danger. There is no focused intensity. The governess is of modest bearing and goes on about moral strictures. Miles is disconcerting and all crypticness. Getty’s accent slides as Miles’ shows off his impertinencies. The governess engages in a domino of bad choices.
The governess has vision of a figure that looks like Riff-Raff from ‘The Rocky Horror Picture Show’. This was not as good as ‘Carmilla’. The soundtrack overdoes the synth music. Miles is vaguely aggressive and his hair is caked in brylcreem. This was dull, scarcely original and not as good as it could have been.
Best Lines:
“My deceased brother’s children.”
“Poor sad thing.”
“Not fit for innocent eyes.”
“Arrange your dress please.”
~
The Hot Number Affair
This is the episode that guest stars Sonny & Cher. Sadly the print of this ep is really bad. An actor with a stick on beard who looks like Paul Johansson dies. Thrush threatens baleful consequences during a hostile confrontation. Season 3 made Solo and Illya inhumanly unintelligent. This ep is full of kazoo music. Thrush does dumb things and need to recover a dress.
Illya pretends to be Japanese. People’s IQ shrinks. There are lackadaisical villains. Solo has unearned self satisfaction. The plot is gross triviality and involves the garment district. Nobody has moral leadership or moral messaging or moral high ground. This was earnest and leaden and all self-conscious seriousness and oblivious amusement.
This is a rank farce that is not deliciously mischievous. Solo jokes about Illya being a fashion designer. A joke that would pay off in the 1983 reunion TV movie. The dialogue is not exactly acidic. Cher treats Sonny with vague disgust and as a general blight. This was not smart, funny and unpredictable but it is okay with wit and attack. Sonny is hapless. People are menaced with a finishing iron.
Illya is dangled upside down in a bag and hit with a stick. Someone on the writing staff had a BDSM fetish. Solo the manwhore is rebuffed. Cher fancies Illya. Annoying kazoo music plays. Sonny wields a shotgun. Why are there gymnastic bars in a garment shop? Illya reminds Solo he is Russian.
How many third level institutions did Illya attend? Hideous 1960s fashions are worn. Thrush is stymied and while the artistic direction of season 3 can be debated, Sonny and Cher were amusing guest stars.
Best Lines:
“You don’t like the plumbing, move!”
“Every deadbeat’s an artist.”
“Jump the rent.”
“Show you his oilfields.”
“Get a haircut.”
“A hundred dozen!”
“Cheapskate!”
“Finks.”
“Which casino?”
“You know the one with the pretty fountain?” 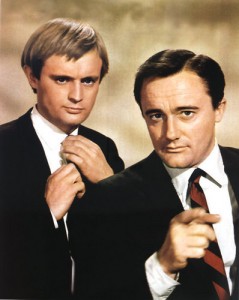